The right to insult

In 2008 when visiting an agricultural show, the then President of the Fifth Republic, Nicolas Sarkozy, was refused a handshake by a French farmer. Rather than just shrugging inwardly and passing on, the foul-mouthed little head of State snarled back "Casse toi, pauv’ con". I wish my quadrilingual nephew were here to check my translation - the closest I can suggest is something like "Fuck you, dickhead".

It might have ended there had not M Herve Eon, some six months later, held up a placard bearing these same words on the route of a presidential procession in Laval. Eon was arrested by plain clothes police and charged and convicted of insulting the president, under a French law of 1881 that also criminalises insulting hordes of other establishment members, including foreign heads of state. After refusing to apologise to Sarkozy to reduce his penalty, Eon managed to get this appealed at the ECHR - and though the ECHR would doubtless have dearly loved to have upheld such penalties against lèse-majesté, the court felt obliged to avoid international ridicule by declaring that M.Eon's declaration had been satirical, and was therefore permitted.

In France it takes a whole bench of judges to tell the difference between an insult and satire. And satire itself is seemingly only protected when it not too vicious or biting; cartoon or distorted images of protected fat cats can all too easily be termed insulting.

France of course is seeking only to implement fully the provisions of the International Covenant on Civil and Political Rights (ICCPR), effective from 1976. Luckily it already has an earlier 1881 law that does so. The ICCPR is an appalling piece of treaty-making; as is often the way with such things, it authorises suppression of free speech to a greater degree than it protects freedom of expression. In particular article 19 (3);


The exercise of the [right to freedom of expression] carries with it special duties and responsibilities. It may therefore be subject to certain restrictions, but these shall only be such as are provided by law and are necessary:
(a) For respect of the rights or reputations of others;
(b) For the protection of national security or of public order (ordre public), or of public health or morals.

And there you have it. Governments may freely introduce laws to protect the reputations of others from insult. And you can be sure that the 'others' that many governments will have in mind are not us ordinary folk but those for whom reputation is vital - such as ministers, politicians and members of the establishment.

The EU has taken the lead in seeking to implement across the EU its own interpretation of the international convention, to which all 27 are signatories. Many EU nations can already lock their citizens up for insulting politicians - but thank God the UK is not amongst them:- 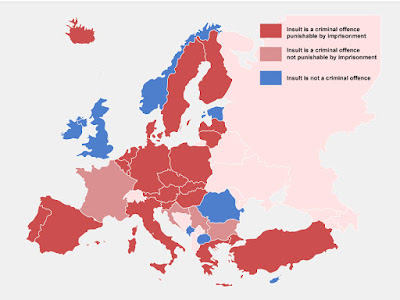 M. Herve Eon was also fortunate in that France only fines those that insult its establishment figures, rather than locks them up. The fines, though, can be up to €45,000 - on a scale greater than anything the UK's summary courts can impose for a whole host of serious criminal acts. In Austria one also has to be careful what one writes and says -

Now one can begin to understand the sort of legal changes that Yvette Cooper and others of her parliamentary cohort are seeking, and why they are so keen to adopt the EU standards on the criminalisation of insult. We must all fight this with every fibre of fortitude; British politics has always been a robust and forthright process, where political insults are freely traded and politicians expected to have thick skins.

Provided that my frequent reminders to Mz Cooper of her pledge to house a migrant - a pledge that neither she, Lily Allen nor any of the fatuous virtue signallers have fulfilled - can remain as satire, provided that I never descend into encouraging violence, harassment or intimidation (which I absolutely counsel and extort against - whether directed at politicians, migrants or any persons). So here again is that clip from the Telegraph on the 'flipping' of Mz Cooper's two homes, either of which is doubtless capacious enough to accommodate a migrant or two - 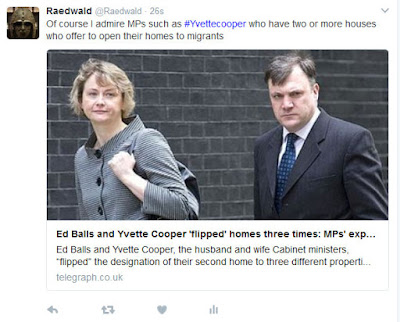 "D*ckhead"... the term used means "poor c**t" and the bit one might like to nail Monsieur Pottymouth with would be the sneer at the man's relative poverty.

Only an effing idiot would not allow me my right to insult.

In some ways it helps the scum. If you are going to jail for "insulting" the polipig scum who daily move their bowels on the rest of us and skip away laughing, you might as well go after them physically.

Calling them for the scum they are helps take the pressure off.

In the UK an appropriate T-shirt will attract over zealous plods...

Raedwald, you probably remember Germany's own such recent case ....

Sciascia sums it up, S, with the immortal:

His own comments on his five categories are devastating:

[A tiny number, the men; few the almost men, for me humanity ends after the mezz'uomini. But no, down further, to the ominicchi: who are like children that believe themselves adult; monkeys who imitate adults... And again, further down: i piglianculo [pigliare is 'to take', culo is arse] who have become an army. And last the quaquaraqua' [the quackers] whose lives have no more sense than ducks' lives.....]

Makes insult into an art form.

@HG: So good to hear from you! Was thinking of you just the other day. Care to get in contact again? Best wishes, Sackerson.

'Now one can begin to understand the sort of legal changes that Yvette Cooper and others of her parliamentary cohort are seeking, and why they are so keen to adopt the EU standards on the criminalisation of insult.'

One of Orwell’s most important messages in 1984 is that language is of central importance to human thought because it structures and limits the ideas that individuals are capable of formulating and expressing. If control of language was centralized in a political agency, Orwell proposes, such an agency could possibly alter the very structure of language to make it impossible to even conceive of disobedient or rebellious thoughts, because there would be no words with which to think them. This idea manifests itself in the language of Newspeak, which the Party has introduced to replace English. The Party is constantly refining and perfecting Newspeak, with the ultimate goal that no one will be capable of conceptualizing anything that might question the Party’s absolute power.

You'll have notice the sameness of politicians these days, for example Cooper could easily be Rudd or Morgan. They seem to be driven by some sort of common purpose and not by a particular political philosophy. A post-democratic era is fast approaching.

"You'll have notice the sameness of politicians these days, for example Cooper could easily be Rudd or Morgan. They seem to be driven by some sort of common purpose".....why stop there? Theresa the appeaser is one of the gang, she very much favours limits on free speech, and I suspect that most of the execrable "conservative" party agrees.

It's not some sort of, it is just that: Common Purpose. This shadowy organisation exists to undermine democracy and any wrong-thinking (i.e., free-thinking) by escapees from the hive mind.

Normandy farmers have little respect for politicians and have been known to name their donkeys after eminent ministers.

M. Meunier, a pig breeder from Cambremer, Calvados entered a young Bayeux sow for the 2009 Salon d'Agriculture, the year after the Sarkozy incident. The organisers objected to her name, which was Casse Toi, Pov'Con. She was re-entered under the name Camomile and won first place.


Normandy farmers have little respect for politicians and have been known to name their donkeys after eminent ministers.

Thankfully Norfolk farmers don't.Then the Norfolk word for donkey is 'dickey'. "Hey little girl would yew like a dickey back ride on Davis ?

Of course there is, and must be, a right to insult. That does not mean that every insult is laudable, nor every insulter a hero. Some insults are just repetitive, or boring, or childish. Some are gems of wit, or provide the insulter with the only means of turning the table on powerful figures.

Some insults seem much more sinister. The depths of the insults heaped on Margaret Thatcher went beyond the normal that a powerful politician would expect. Its virulence certainly succeeded in intimidating ordinary people. It was less insult, more an attempt at pc social control.

Freedom of speech is critical to our society, to its balance, and its political and religious health, and to our freedom. Mohammed must be a target as much as Christ, or Dawkins, or Thatcher, or Thornberry. There is too much fashion and political correctness, not to say fear, in the insults that we are prepared to "allow".

Seems nobody has remembered the Referendum lock on new powers - were we to reverse Brexit, would would have to have another referendum on, as Radders notes, a greatly changed EU