With a monumental lack of irony, Donald Tusk claimed yesterday that Brexit marked the true end of Empire, as though anyone thought that such a terminal event was a bad thing. This utter lack of self-awareness amused me hugely on two grounds. The first was that Brexit will mark the end of Britain's subjugation and restraint by his own nascent EU Empire, the second that Britain's rejection of the role of military muscle that the EU had planned for us will almost certainly curtail the EU's own dreams of a European empire to rival the US and China. He knows so little of the UK, or has been so deluded and gulled by specious Remain propaganda, to imagine that there's anyone at all on the Brexit side who yearns for Empire. Since 2008, not one single comment on this blog has even mentioned it. It is, as the psychologists say, Projection.

China, too, having hardly laid the first belt-and-road asphalt, is already experiencing the pains and costs of Empire, and I don't mean just Hong Kong. The hundreds of billions invested in African ports, transport infrastructure, mines and natural resources will be increasingly at risk; from forfeiture if ever the bribe taps to the ruling elites are turned off, or at the hands of an emergent new kleptocratic elite seizing them for the new regime. Either China uses military force to secure the assets, or loses the vast investments - a dilemma that every ex-colonial power has faced. Long lines of communication means a low ratio of teeth to tail, something that the US, with 1.3 million persons under arms only a small fraction of whom are tasked to combat duties, has already found. And internally, China is at the stage of millions detained already in detention camps - universally the precursor to regime change.

I have published before a map of Tusk's imperial European ambitions which I find simply strategically unbelievably stupid. Turkey doesn't even have to start a tank - just to release 3m migrants launched into the EU's soft underbelly. A NATO without boots on EU ground can shorten supply lines and constrict all sea routes to the EU if required, closing the Med up like a boating lake.

So thank you, Donald. Trebles all round, I think. 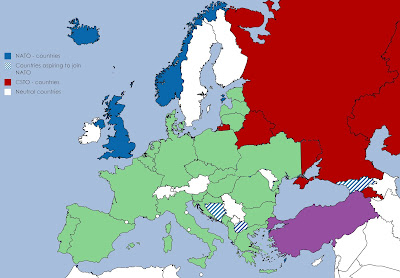 Get a dictionary, look up "empire".

Countries do not generally apply to join them, and remain members-at-will by consent.

Donald Tusk was wrong, however. He should have said "English empire".

The UK was free to have as many referendums as it liked, whenever it chose, over its membership of the European Union.

The English Tories, however, say that the Scots are not allowed one on their subjugation to Westminster until they say so.

What were the Scots doing in 2014? Not knowing what they were voting for?

Who is doing the subjugating?

Good post Readfeld, it is thought provoking. Empire... surely a concept of at least 2 centuries ago that no longer holds any attraction? An EU politician still dreaming of one is a sign that there is urgent need for seismic change of societal management, and its coming. Employment is no longer a given, taxation by a state is stuck in the early 20th century. The EU is literally the emperor with no clothes, it is inefficient and not needed.

Keep up the good work.

Tusk is a total bell-end!
We owe a great deal of respect to the Poles, and euro-stooges like him do nothing to enhance our friendship.
Perhaps Merkel put him up to it. He is her bitch after all!

Tusk, where to start!

You'd think a Pole would be a bit more twitchy about a German empire particularly when it seems determined to stick its oar into Russia's historical backyard.

In 1945, Warsaw didn't look that different from Hitoshima!

As you say Radders, like the trolls here, Tusk and all the other wannabe Imperialsts seem to have no sense of irony, self-awareness or much else come to that.

They are simply jealous of the English empire (fine if the troll wants to call it that) the greatest and most influential empire the world has ever seen (or is ever likely to) What can they do except to try and revive holy Roman empire? (for the nth time)

"It's not that they're wicked or naturally bad. It's knowing they're foreign that makes them so mad!"

We'll have the last laugh, we always do. And they know it!

If it's driving them mad, think what it's doing to our trolls!!

Well, the highly marginal result in the Scots' vote was based on the Tories' "pledge", which was torn up before the last votes were even counted.

Had it been honoured, then the Scots would have had a veto on this European Union exit nonsense, under a proper constitutional settlement.

Even Farage agrees on that.

Mark @15:22
It's knowing they're foreign that makes them so mad.

That could almost be a Wellingtonism.

Flanders and Swann, see them on YouTube "a song of patriotic prejudice".

Trite I know, but they don't write em like that any more!


Empires don't have to be National to be problematic. The biggest and most destructive Empire we've ever had (and STILL have) is the BANKING Empire.

It's never spoken of, never challenged, never condemned (properly) yet has insinuated itself into every corner of the globe, runs (and ruins) everyone's lives and is the main contributor to conflict.

China? America? Russia? Meh...... none of them can touch the power of the banks.

The Belgians running an Empire. Worked out well last time.

I’d rather the UK was not a member of Mr. Verhofstadt’s EU Empire in case the French and Germans decide to invade Russia again.

The eu vampire....and it $ucks

JPM - you call the outcome of the Scottish independence referendum ‘highly marginal’. Turnout was 84.6%. Yes was 44.5% No was 55.5%. You must have received your maths ‘education’ from the same teacher as Dianne Abbott. Also, that referendum was fought on local, rather than General, election rules which excluded ex-pat Scots and included EU nationals resident in Scotland. Without that gerrymandering I suspect that the margin of defeat for the nationalists would have been even wider.

I think it was Senhor Barroso who claimed that the EU was an empire - the first one where member states had volunteered to belong.

When Poland joined the EU, a deputation of Polish Councillors visited Nottingham as part of the festivities . It was a public meeting so a dozen or so of us turned up - rather like the pork chop at the bar mitzvah. Of course, we were very polite and made it clear that we were pleased to see the visitors and to wish them well.

But why, we asked, had they given up the freedom they had won from the Warsaw Pact to subject themselves to the EU? This caused some embarrassment on both sides. The most impressive member of the Polish delegation was a former general, who made it fairly clear that it was a matter of insurance ( although he did not put it quite like that) . “ we did not decide our own borders” he said but made it clear that membership of the EU guaranteed such borders as they did have.

The leader of the delegation did not speak English, so everything had to be translated. We finished by expressing our friendly intent to the people of Poland and hoping that the new arrangements would prove to be all they wished- although we rather doubted it. The leader made a stirring speech to finish things off and, of course, we politely applauded. I was standing next to the interpreter, a charming lady. As the applause was dying away, she said sotto voce “ But remember. He is politician”.

It might have assisted JPM had you included the fact they extended the right to vote to 16 year olds.

However when it comes to the question of voter participation adding legitimacy to the EU, it does seem - to me at least - that their talking heads are doing so on a foundation of wet sand, with voter turnout in 15 states registering less than 50% and the total for the entire construct only just scraping in at 50.66%.

And I suspect that the ONLY reason it jumped from 42% seen at the previous two was because voters were motivated by Brexit and their equivalents of our UKIP / Brexit.

And do it is that eurosceptic parties are in the ascent within their "parliament". A trend my water tells me will gain momentum - and in many cases actually driven by the younger voters.

Tusk is just another petulant little man who has seen Brexit and therefore the dream of a United States of Europe start to collapse "on his watch." And everything he has done to try and stop it has simply made our departure more necessary and more likely to happen.

He's a bitter little man, as is Juncker.

Good spot Mr Smoking Scot - actually I wrestled with that one but decided to leave it out. From ‘contributions’ thus far, JPM seems to struggle with basic maths and stats so introducing another variable appeared uncharitable to me. My waters concur and it sure is!

JPM looks at that cretin Korbyn and thinks the man a low grade fool.
What pathetically small dreams that son of Lenin has. He considers ‘Free’ Internet a goal.

An EU Internet is within our grasp. Eu supplied and EU approved. To carry the word of the bureaucracy to the millions of adoring citizens. And being able to no platform dissenters.

Korbyn is a depot manager.
Without the imagination to consider what power a ‘ free’ EU internet would bring.