After this election campaign, the role of broadcasters will never be again as it was. Any reasonable person who watched Marr trying to humiliate the Prime Minister yesterday, without success, cannot fail to conclude that the usefulness of these things has passed. Marr was simply not interested in answers, only with throwing like spears as many barbed, distorted and wounding questions as possible, rat-tat-tat. As soon as Boris was deflecting the last one another was launched. It was not an edifying spectacle.

I can't quite track how the broadcasters assumed that they held this power and authority over our elected representatives - and by extension, assume they hold the same power and authority over we who elected them. But they are grievously mistaken. It's fine for us to disparage, undermine, scrutinise, reform and dismiss the elected political class- we're the voters. It's not fine for the broadcasters to impertinently pretend that they're acting in our name when in fact they're acting for a political establishment now under threat and fighting us for control of the nation. They're not acting for us, or for higher ideals, but for their own power and interest. And this election is the event that has called them out.

We don't elect a President in this country but representatives who ally themselves to a party. If the broadcasters have a job at all it is to present and probe the parties - taking whomever the party decides to put up to the microphone. If they imagine their job is that of attack dogs, establishing their own dominance and authority by savaging individual prominent politicians, they are mistaken. That's our job, not theirs. 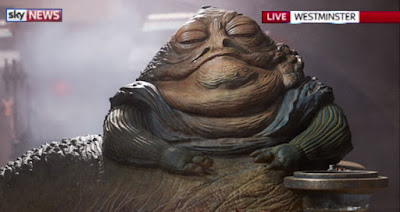 For instance, he allowed Johnson to claim, unchallenged, that Labour would "disband MI5".

This is the reverse of the position. They would increase its resources.

The Broadcasters have been allowed to assume the role as guardians of the left-wing, "liberal" consensus by a corrupt, incestuous relationship between them and the politicians they now claim the right to interrogate.

The Conservative Party has had ample warning that the Broadcasters, in particular the BBC and C4 - but Sky News is little better - are institutionally left-wing and are not abiding by their Charters' requirements to be politically impartial. They've done nothing about it, because it didn't matter too much all the time the CON Party was toeing the "liberal" line. Now it isn't - so it's getting the same treatment Nigel Farage and UKIP/the Brexit Party have had dished out for years.

With Boris looking likely to duck an interview with Andrew Neil, I expect Andrew Marr was told that it was up to him to skewer Boris and he'd better do a decent job of it. Unfortunately for the BBC, Marr simply isn't the same calibre as Neil.

"They're not acting for us, or for higher ideals, but for their own power and interest. And this election is the event that has called them out."

But we will let them get away with it because they are acting for the two major parties and we should always remember that.

Oh and by the way, we elect party representatives, not ordinary folk that later ally themselves to a party.

You can be absolutely certain that if it was in their interests to shut that tin-pot marrxist, Marr down... They would.

You should watch the interview between Noam Chomsky and the young, then upstart Marr. It's on you tube.

Chomsky nails the BBC and Marr, as you'd expect.

He makes a similar point, that the journalist is part of an establishment, it's just that his analysis of what that is and its purpose is perhaps different from that of those here.


The Brexit vote has clearly been more than a vote on the EU - it has shown, right from the outset, who really runs things and how little regard they have for the people that should wield the power - the voter.

The current crop of politicians and their parties make ridiculous claims and assertions that only they can right the wrongs whilst the media make equally ridiculous assertions on what those rights and wrongs are.

Voting to leave the EU was the VOTER stating that they wished to 'right a wrong' but the constant delays, obfuscations, distractions and distortions being used to frustrate that demand clearly shows the breakdown in the link between the voter and the ruling elite.

The MSM are working against the voters too - asking the wrong questions of the wrong people and distorting the truths on any subject they are told to promote (EU, Immigration, Climate, Banks etc).

To single out Marr or the BBC is to scratch at the surface of the problem and ignore the collusion of the MSM as a whole.

The sub culture of the media, higher learning, and certain aspects of the Civil Service/Judiciary has become mostly left biased. Unfortunately this comes with an unhealthy attitude of prioritising 'my opinion, my feelings' over fact or evidence (perhaps a consequence of philosophical post modernism).

I hope this relativism will collapse under its own internal contradictions. You can argue that Brexit, Trump, Farage, and Johnson (plus political developments elsewhere) are signs of this cultural turn.

I would like to see Johnson interviewed by Andrew Neil... but it might be better for us all if Johnson publicly declined to be interviewed because of the bias he has already encountered. Can you imagine the furore if he said that he had 'better things to do than be a target for political motivated bullying by the like of Andrew Marr'?

If enough politicians declined media interviews then the media industry might have to reshape itself or just 'go after' the desperate politicians who lust after exposure. Other means of reaching the electorate are now available. Strange how politicians use of social media has been widely criticised by the MSM...

You are describing the influence of a vacuous, pseudo-intellectual, but now endemic philosophical movement called Postmodernism.

It is that which permitted the Leave vote, based on genuine emotion, but incited by falsehoods, and looks like re-electing the worst Prime Minister that this country will likely have ever seen.

It has also led to e.g. moves by some self-obsessed minorities to change the language that we speak, by insisting on certain pronouns etc., and to undue sympathy by the authorities for such preposterous proposals.


Chomsky is scum --as are you Cheesy.

I open the blog, then press comments, then press JPM (removes the comment from view), then read.

For the most part folks here contribute and are well worth taking the time to read, however it's rarely worth the effort if they've got JPM or Cheese or something like that. They've been troll suckered.

I believe the shadow home secretary, Diane Abbott, backed a Parliamentary EDM in April 1989 demanding the scrapping of MI5 and the Metropolitan Police’s Special Branch.

The motion called for "the abolition of conspiratorial groups like MI5 and Special Branch which are not accountable to the British people".

Both organisations were at the forefront of counter-terrorism investigations against the IRA and other violent extremists in the 1980s.

During the 2017 GE Ms Abbott declined to comment upon her support for the 1989 EDM but had joined a campaign against legislation seeking to force anyone standing for election to local councils to renounce their support for terrorist groups such as the IRA.

Of all the unproven claims made about those who voted Leave their alleged belief in postmodernism is the most absurd.

People accused of hankering after empire, racism, stupidity, being uneducated are not obvious candidates for postmodernism.

A possible explanation is that the Conservatives want a biased left wing BBC to campaign against policies that won them the election but that they don’t actually want to implement.

Curbing immigration and Brexit would be examples.

As a result of this interview I lodged a complaint with the BBC for the first time ever. Why not let Neill interview Marr ? Now, that would be something...

I think that you're a phoney, Ecks. Probably privately-educated, not a state grammar school lad like me.

JPM, you seem to be mentally ill. Seek help. Compulsive stupidity is not an edifying sight,

Please find a way to tag the daft stuff from "Juvenile Points-Maker", so I can skip it more easily - perhaps a different colour lettering?

Finding that crap in the comments is like finding a slug in your salad - yuck!

Here’s a real public school phoney for you JPM:

MSM bias is nothing new. And we shouldn't care about the genuine overt bias we in The Guardian for instance. The problem with the BBC is that the public are forced to pay for it!

Went to a secondary modern Cheese. And 1000 times smarter than Marxism-sucking social-climbing ZaNu scum like you. 150 million murders Cheese--that is what you support and the measure of what foul shite you are.