Over a career spent handling hundreds of millions of other people's money, the one key constant that has always allowed me to sleep at night is not once, ever, having stolen a penny of it, never having taken a bribe and never having succumbed to corruption. I have turned down everything from Wimbledon centre court tickets, cruises, hampers, Glasto tickets to thinly veiled offers of brown envelopes. My philosophy is don't even admit the thin end of the wedge; I was always clear with tenderers and subbies - the limit was an inexpensive working lunch. Not that I wasn't up for a drink - but when they put the company card behind the bar I'd add £20 of my own to the pot. Yes, scoff all you like - but I have a reputation for the very highest standards of stewardship of my clients' money, and I'm proud of it.

So reading today that Austrian government officials took bribes of £55m from Airbus simply disgusts me. The levels of public corruption here are very much greater than in the UK - every political and public actor from the Burgermeister upwards is suspect. Partly it's being in a half-beer half-wine country, partly it's the deeply corrupt culture of the EU. I now regard all public officials in Austria as potentially corrupt and deal with them accordingly.

The Austrian corrupt payments were the largest amongst Airbus' campaign of bribery, fraud and filthy money - all of which has now been swept under the carpet with no prosecutions for a €3.6bn payoff to the even more corrupt EU. 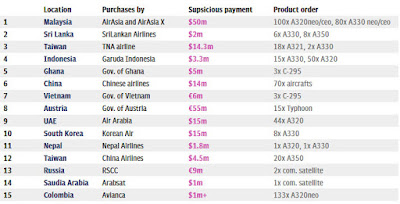 Email ThisBlogThis!Share to TwitterShare to FacebookShare to Pinterest
Labels: corruption

Not much squealing about Boris channeling GBP130k of taxpayers' money to watch a pole dancing show.

This country is not perfect of course, but it's a damn sight better than most. Certainly the EU.

There's the patronage theory or ability theory to explain the 'social order'. I rather fancy that the elite operate by the patronage theory. It's been that way for years - even in Biblical times "Whoever has will be given more, and they will have an abundance. Whoever does not have, even what they have will be taken from them."

So in a political elite under the democratically insulated EU I expect patronage to be pervasive. And nothing says patronage like brown envelopes stuffed with cash. Or jobs for the boys.

Is it a surprise that the elite hate people who threaten to 'drain the swamp'?

When I worked in Belgium there were two prices for every job, the official tax paying one and the cheaper black one. Most people had a large portion of their wages paid in cash, which was fine until they got fired or wanted a pension, because of course their official salary and hence pension rights were very low. It was endemic. The U.K. is not perfect, local govt is massively under-scrutinised, the amount of money depending on planning consent is huge. Bribery was a way of life on the continent, my mother remembers when in France you paid the official price for your house in front of the mayor and notary, then the officials left the room and the rest of the money was paid over. President Hollande understated the value of his property to avoid wealth taxes, the list is endless. Our good friend Mr Verhofstadt likes racing classic Bentleys an expensive sport for a lowly politician.

Maybe Austria is just better at bringing the perps to justice than the UK?

Don't be so sure about things in the UK. Scratch the surface of many things done by local government and the stench of corruption is overpowering. The best you can says about UK is they are better at covering it up. Anyone who doubts that might like to look at the number of local government employees who leave office early with nice pensions having signed none disclosure agreements.

JPM - do catch up, there

1. The perps have not been brought to justice, that's the whole point
2. The UK is not on the list because our RAF aircraft procurement process is always keenly debated and contested. The recently acquired Poseidon P-8s for example.

UK establishment corruption is of an entirely different kind.

Par for the course. My last 20 years have been in export working manily in ME and LatAM, 60% time abroad. The shit we lose for being so straight is too high to put a number value on. I am not even meant 'to know it goes on' which is effing ridiculous.

Yep Span but how would secure would you feel if you knew your defence kit had all been procured from the highest briber - AIFVs that won't stop a bullet, fighter aircraft that can be downed in seconds by 4G Russian clones, warships so flammable that a few incendiary rounds can set them alight? The bent bastards taking the bribes aren't just criminals, they're betraying their own people.

"Betraying their own people"

That's the problem isn't it. "Their people". Just something to be exploited for personal gain/prestige.

It's the fundamental difference between a civic society and one that isn't.

We are still the former. How long before we become the latter?

Not to mention a 3.1% hike in allowances for the house of lords yesterday. They are now on £323 a day and many of them never say a word. Some of course just pop in to sign the register while the taxi waits we are told. Legalised corruption or what?

Just clarify - do you mean that the institutions of the European Union are corrupt, or that the member nations are, or both?

If the first, then give examples and the evidence. Thanks.


I'd like to see a breakdown of contracts against politicians and their 'influencers' over the HS2 issue.

No effing way is that above board.

@JPM - EU corruption? Start with the CAP and work your way from there.

Our Establishment may not often be caught participating in "brown envelope" corruption, but the "old boy" and patronage systems which apply to the highest levels of our governance (and therefore Governmental procurement and policy decisions) are just another form of corruption.

Stuffing the House of Frauds, which we were assured after Blair's reform would become a Chamber of Experts, with Party Donors, Cronies, friends of the PM and people who have "done him a favour" is just another form of corruption.

It would be interesting to know exactly who lobbied Boris to proceed with HS2, and what the leverage was.

Ditto the Huawei decision, where a number of ex Governmental Ministers and family members have, or appear to have, close links with the Company/Chinese Government.

Just out of interest, is Airbus significantly different in this respect than Boeing?

Dave, by definition, a law, whether you like it or not, passed by a democratically-elected parliament cannot be "corrupt".

Just because you don't like it - and nor do many people - does not make it so.

How about the UK's High Court ruling, that lying to the public is not "misconduct in office"?

Parliament sre part of the public too, so how does that work?