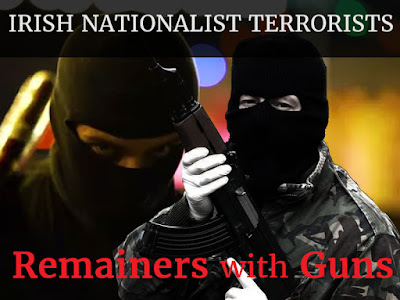 Some will call this blog-post hyperbole but in fact it is correct in every way.

less tragically but no less the 'Remain' fault is the poor economic results...I know, I KNOW that most is good but the bad that there is , falling business investment etc is 100% down to uncertainty. WTO out or not, it is the not knowing that is causing the problem. The dithering waffling fuck-wits are causing the problems and have the gall to say 'Look, told Brexit would do this".

The projection and hypocrisy is startling in - allegedly - educated people.

Also as an aside but on topic: yesterday there was a march in London, Whitehall, Cenotaph etc of NI veterans in support of Soldier F. Reasonable turnout. Not a word on the BBC, nothing on any webpage even the 'minor' regional/London pages. Of course the stories about irrelevant piffle were all over the place.


I wouldn't put the death of that poor girl out of reach of the Deep State either - their efforts to bring in the Americans (note how Clinton is getting his oar in recently too) would indicate that they want to stir things up enough to change yet more minds on the Brexit issue.

As for the 'poor' economic results - there are more than enough indications for an imminent global economic crash on the horizon. Even with an improving local economy (lower £ etc) a currency-led collapse will hit everyone. The US$ and Euro are both at breaking point.

Although Remainers can and should accept much of the blame for the delay they are likely victims of the State in terms of being over-represented by the manipulation of their numbers. If the REAL figures were more widely known and accepted then the establishment couldn't use them as their excuse for 'finding a solution acceptable to all sides'.

The common reference to Deep State is something that needs greater exposure and efforts to bring them down. If Trump is successful in doing this now that he's been cleared (from falsified charges) his investigations will undoubtedly bring the British Deep State into daylight with their Steele Document interference.

The pressure on all 'deep states' is mounting so we should prepare for another false flag or even more direct measures to deflect - attempts on Trump's life wouldn't be beyond them - but certainly something really spectacular would be on the cards.....

Not sure about their motivation. The suspects are aged 18 and 19, so good fall guys rather than genuinely self motivated.

They've been "groomed" or "radicalised" may be the defence.

I'd suggest her advocacy for gay rights could be their justification.

This morning everyone was convinced the shooter was aiming at the police - an established IRA target - and Lyra just caught the shot. IRA are militant Remainers. 18/19 year olds even in Northern Ireland don't give a fuck about folk being gay. A kid shooting a pistol ad-hoc at that distance in the dark jostled by a crowd at a hidden unlit target can't hit shit - so even less credible that Lyra was a target.

Nope. The cover-up is kicking in. They'll do anything but admit that these kids have been inflamed by pro-Remain brainwashing into violence.

CNN is the Clinton News Network, No? Strongly in support of 'Remain' and therefore very receptive to this sort of false reporting.

To use this horrible murder as fire to throw on Brexit flames is to disgrace us.

I'm just waiting for a claim that this was the fault of Brexiteers - ie if we had voted remain the issue wouldn't have arisen etc. etc.

It is wrong to blame any section of the community for the results of a democratic vote - Lyra's tragic death was murder, pure and simple,it should be treated as such and not highlighted by linking it to a political process.