The heads of government gathering for the G7 this week will be familiar with one another; seasoned politicians all they are closely attuned to each-others' domestic standing, approvals and prospects. There will be private commiserations for Italy's Conte, who against early expectations has proven capable. Next year the seven will have to welcome (probably) Prime Minister Salvini.

But hold on, you say. In all those photo calls there are not seven but nine grinning ninnies - who are the two extras? They are, of course, the comedy duo from the EU. Like the smelly kids from the local dysfunctional family with the alcoholic parents, they just have to be invited to other childrens' birthday parties out of common decency (but Mum! Why do they have to come? They never bring presents..) . The duo don't of course understand stuff such as democracy and elections, so all such talk goes over their heads, but they will dutifully stand at either end of the elected heads of government photo-call line-up like bureaucrat bookends and gurn at the camera as though they were normal.

Except this year there will be only one. One bookend is having his sciatica removed or something. But at least the real politicians will recognise the other one - which will not be the case next year.

Toronto 2020. "You're the Presidents of what? Sorry, Lady, you're not on my list, and neither is this little guy.. see we've got Canada, the US, the UK, Japan, Italy, Germany and France right there, and the drunken guy and his pet monkey are probably doing some photocopying somewhere .. they're not coming? You're the new drunken guy? .. er, I mean Lady?..OK let me make a call ..." 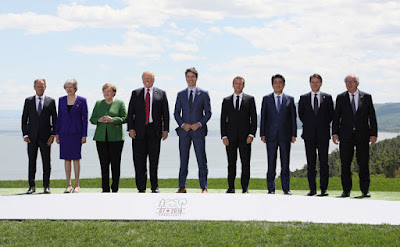 They're not so much the charitably-invited smelly kids, rather they're self-invited and self-appointed chaperones who make sure their charges do not go off-message. It's quite sinister that grown-up heads of government can't go anywhere without having to be accompanied by someone to watch over their shoulders. I'm just surprised the Commission hasn't demanded the right to sit at the Security Council table to keep France and the UK on a tight lead. At least after 31st October their function will no longer be to monitor our international interactions.

It's because the eurozone is an economy.

And because the Single Market is an economy.

The meeting is for those responsible for economies, not for nation states.

I suspect Germany tells the EU, France and Italy what to do (well that's how it's been up to now)

Could Mr Juncker be the EU's equivalent of Boris Yeltsin? They're both drunks and they both presided over the destruction of their empires?


After 2020 the EU will take over security Council decisions won't they?

And if it was all about economies, where is China or Brazil etc?

It's all ego massaging anyway. We all know it is the banksters that hold all the cards.

I never claimed that they were Mark.

It's interesting though, how despite China's economy being a dozen times that of Italy's, it is not represented at the G7.

The IMF say that it is for the largest "advanced" economies, so that explains it then.

It does look rather to me like a political construct, for those nominally within the US orbit though.

If we're going to deal in economies not nation states, then either the EU shouldn't be there or they should exclude EU countries. You can't have it both ways.

@JPM, No, the EU Presidents are not there because of the Eurozone, or representing any economy. They are there as chaperones, as EU member states that attend these sort of meetings are meant to represent the Union, not themselves and to make sure they co-ordinate their responses and positions with the agreed Union prosition. So the Council President and the Commission President invite themselves along in order to make sure the member states follow the party line.

The same applies to the UK and France at the UN Security Council, but the Commission has not been able to get its own seat at that table... yet. As I said, when we finally get out, they the Commission will have no authority to be looking over our shoulder any longer, nor will we be under any responsibility to co-ordinate our position with the Union or the Commission.

Maybe whoever convenes the G7 says that you can have it both ways Diocese?

Incidentally, here is a list of some unelected UK presidents:

That course, at The Institute Of Wit And Repartee didn't go so well then Jack?

There's president cheese as well. Nobody elected that.

I don't think it's been convicted of fraud though, and nobody I believe has seen it drunk.

No need to feed the troll Jack, but fun to mock it. Oh he may come back with something "witty" and "profound" or what he imagines to be Olympian disdain but he can't fool us. His sheer persistence tells us all we need to know about the insane rage and hate a democratic vote has engendered in him.

Interesting that both Tusk and Junks are laaning in, encroaching from the sides.

"Maybe whoever convenes the G7 says that you can have it both ways Diocese?"

No, YOU can't have it both ways; please try to understand. Diocese was replying to your 07:29 attempt at an answer.

The last two are even funnier than Jack's remark!

Pity you won't be able to get an EU grant to develop them after Halloween.

Nah, you're getting mixed up with Robin Tilbrook, Mark.

Your just making my point for me. Please continue dick head!

Here are a few more unelected UK presidents to keep you going:

You forgot Mess Presidents. There are literally thousand of those.

Jack is right, you are tedious.

When your an ahole, stop digging.

Butt you just carn't kan you?

Jack's blunt, but correct. IMHO, JPM has ruined these comment threads.
It gets to the stage where one just 'pages down' to find some
sensible views. The same has happened on ConHome with 'OneTimeTory' taking over most threads there on every topic.

Bernard, no, today he is clearly being the rude troll you all want him to be!

Allow me to confirm: JPM you're a boring tool.

He's a useful quality control indicator for me - the more puce-faced and spittle-flecked he becomes, the more pertinent the post.