There are still a few changes that Blair made to our ancient democracy that must be undone to restore us to health. Brexit will push things along nicely - not least the re-introduction of proper entry and exit controls that will allow the ONS to sharpen their pencils a little. This week it emerged that we have 240,000 fewer Nigerians in the country than we thought, but 240,000 more Poles.

Project Fear III is starting to gear up after its Summer holiday. It seems the theme de jour is to be terrified EU27 citizens in panic and fleeing Britain pre-Brexit. Ahem. The BBC, Sky News and Channel 4, and any other MSM zombies that can't tell their arses from elbows, actually have no evidence for this at all - it's like them reporting that the thunder and lightning is due to the sky giants fighting over a rusk. But that doesn't stop them reporting fake news these days.

There are two main reasons why more EU27 citizens are leaving the UK than arriving right now. One is the pound's very low exchange rate. You can draw a graph that almost exactly correlates EU27 inwards immigration and the £/€; back when it was €1.45, they were rushing the doors. Now it's €1.08 they're moving to fresher fields.

The other reason they're going is the same reason a Brit I knew here has gone home - the grey economy. Now that UK citizens in Europe and EU27 citizens in the UK must show how they get their income, a few thousands or tens of thousands who have slipped under the tax net, or who make or supplement their incomes with illegal work including prostitution are being exposed to the extent that they're packing it in and going home. Good.

And has the NHS collapsed like they said it would? Has it horsefeathers. Here's why - 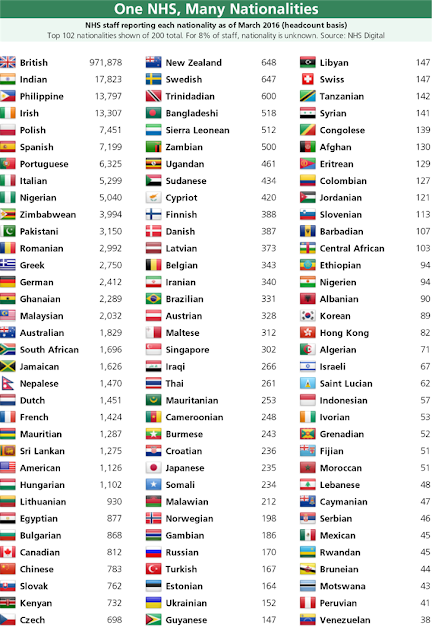 Project fear - could it get any more obvious/ludicrous? They were reporting on potential shortages of black bin bags and the possibility of garbage being stored in car parks due to the lack of recycling/disposal facilities post-no-deal-Brexit on alBeeb last night......

FFS this is getting to be beyond a joke but at least their fake paranoia is showing them up (the BBC et al) as abject morons for imagining that what they portray has any meaningful affect on people with two brain cells to rub together. The net effect is, imho, to create an even greater 'the King has no clothes' approach to the subject. The blinkers are rapidly falling off even the most ardent supporters of remain and this strident reporting of 'disaster-no-matter-where-you-look' approach is seriously counter-productive.

And then we get the the BBCs Charter (again) where the so-called 'balanced reporting' (lack of) is exposed by ZERO articles on how the UK will benefit from a no-deal exit. Come on BBC.... just ONE article maybe????

If anyone ever wanted proof of media reporting corruption they need only look to our National outlet where the examples are legion and criminal.

It's past time these corrupt fuckers were brought down.

The only time this sort of drivel could have worked was before the 2016 Referendum. If it didn't work then; when it had to, then it isn't going to work on any subsequent iterations. Indeed, if anything it achieves precisely the opposite effect, Now, we just laugh at it.

The only ones who will fall for this rot are besotted remoaners, or the truly gullible - so that's JPM on both counts then.

The Real Project Fear is that the general populace will find life after Brexit more congenial and the social standing of the EU troughers and supporters will plummet. And what are the media going to fill up their bandwidth with?

If I was in government, a frightening thought, I would ring up the BBC and say that as they have failed to fund the licences for the over 75s then the last settlement was invalid and it is unfortunately our duty to re-open it. I would then say that as they could not be trusted, had broken their promises they were no longer worthy of a private tax. Failure to pa the license fee would no longer be a criminal offence and that they had 2 years, from the date of the original settlement to prepare to go pay to view. Oh dear, that means you are now pay to view, have a nice day.

I think to be honest you could only do this after the next GE as the Beeb would go bonkers trying to fix the election, along with all the great and good, It’s good to dream.

Charles - you're right about timing. After the next GE, the government (advised by Mr Cummings) should start the process to end the BBC charter for ever when it expires in 2027 - ensuring that there is widespread public support for the move. All the over 75s will now support it, as will everyone who voted Leave, and the far left, who think they also get a raw deal, will also support it.

All in all, a large public majority for ending the Charter and licence fee from 2027 is building nicely.

This degenerate shambles propped up by the DUP seem to be making a pretty good job of destroying the fine achievements of the last Labour administration as it is.

Peace in Ireland is apparently on the way out, with bombs and a recent fatal shooting.

The end of Freedom Of Information must be the Holy Grail for these born-to-rule-ers though. I wonder how they'll approach that?

Fortunately they only have a majority of one...

That is a bit to obvious as trollery JPM pet.
You will need to try harder.n

Actually I think the latest project fear is that we will run out of scare stories.

Oh, here comes the troll to prove it!

@JPM, There are so many thing wrong with the Belfast Agreement that is hard to call it an achievement (trying to create equivalence between legitimate government and mafia gangs, pressure from a supposed ally to capitulate to mafia gangs, lack of support from supposed ally when seeking to extradite murderers, the fact that the actual perpertrators of the violence were not signatories to the 'Agreement' and so on...)

Also, the so-called 'peace in Ireland' (sloppy terminology, as the Troubles occurred in Northern Ireland and frequently also brought to the mainland; the use of Ireland is only used as an attempt to imply Northern Ireland should be part of the Republic) is a myth. The mafia gangs (will people please stop calling them terrorists) still operate their protection rackets, still administer the punishment beatings. Belfast is still divided along the mafia-gang lines (try buying a house there if you do not support the correct group).

Having said that, I love the island (NI & Eire). I lived there for two wonderful years in both parts, and it also allowed me to see life on the ground on both sides of the divide.

You are, as Leave voters habitually do, falling into the trap of Making The Perfect The Enemy Of The Good, Raybond, my friend.

And you're conflating two different topics, my friend. I was simply responding to your piece about peace in Ireland, not Brexit voting, so your response is also a non-sequitur.

I should have been more clear in my response. The peace since the Agreement is much the same today as it has been for years; a background of continued punishment beatings, violence/intimidation and racketeering. The referendum result has not changed that. Any recent violence is reported as more useful for the news people to report and attempt to link it to Brexit.

My main point is one you have not answered. For the reasons I gave, I do not consider the Belfast Agreement an achievement. It was an abject surrender (much like Teresa May's proposed EU Withdrawal Treaty) forced on us by a so-called ally. Northern Ireland was a simple law and order matter, and should have been treated as such.

I think Irish voters are going to have something to think about i the next few years.

1. Immigration controls are already acting to push up low wages in the UK - particularly in the horticultural sector. OK, this will contribute to inflation - but the prospect of a healthy 2% - 3% annual inflation when the Eurozone is in a deflationary death spiral is cool

2. Higher wages in the UK will be attractive to Irish workers - particularly after the £ has rebounded back to its natural zone of €1.20 - €1.30. The Common Travel Area will make also make it easy for Irish workers.

3. The EU will shortly act to cut Ireland's corporation tax rates. There will be even fewer reasons for Cheddar factories to locate there, let alone firms that provide goods or services to the other EU26

Even with an open border and low frictional barriers to trade with the UK, Ireland's booming economy of the last 20 years is unsustainable.

Specifically, if such 'terrorism' is ok for the Irish to perpetrate on its population (and other populations) as a feedback against Brexit then it should be ok for similar organisations to arise in the rest of the UK to instigate 'terrorism' as a protest for NOT getting Brexit.

Of course 'terrorism' is, in this case, the usual Mafia-inspired extortion, bribery, druggery and thuggery we all know the Irish wankers that use a political excuse for such largess manage.

For #3, did you really mean cut Ireland's corporate tax rate or force Ireland to increase the rate? The latter surely?

There are two things Blair introduced that will not be revoked.

It is for those reasons alone that I'd love to see him deposited at an airport in Malaysia, where he will be arrested, tried and found guilty of war crimes.

To avoid the very remote possibility that he might be seen as a martyr, he should be jailed for life in Malaysia, or Iraq and all his assets siezed by the State then used to compensate victims and their families.

Best ever comment......"fine achievements of the last Labour administration"...nearly fell off my chair laughing.

The people who benefited from Blair were illegal immigrants, lawyers, Irish terrorists, criminals and himself and his greedy wife to name a few.

What actually improved under Blair? The economy? Crime? Transport? The NHS?Immigration? Foreign affairs? In my opinion a big fat NO to all of the above. He only had one ambition-to be President of the EU and that's why he's crying about Brexit because it can't happen now.

46 and counting of membership of the empire and where has it driven Britain, northern pakistan, third world flea blown black out country, welcome to hell.

Unless we get out this time, 2019: Halloween, we've had it even the hallowed all souls: will give up.

darn it nearly fergit it,

How come they don't know 8% of the nationalities?