Just more of the same

I avoided last night's Oxford Union debate in which four undergraduates and a brown lad from the local grammar school debated wheelie bins or something. There's only so much one can take of these people. I'm desperate for a terrier puppy at the moment and have been spending time watching videos of dog tumbles, straining to discern minute differences between half a dozen wriggling pups in a litter. Pointless, of course.

More usefully, the Conservative Party's funders are reported to be reaching out a hand to the Brexit Party - if only to establish with whom they need to talk. It's far, far too early for anything else. If there is an electoral pact it will be born of need and desperation when a GE is imminent - and subject to the agreement of a Leaver PM and Cabinet. The best thing our big party funders can do right now is follow the grass roots membership and withhold any finance until we have the leader we need.

Meanwhile Mrs May is reported to be trying to commit billions of tax spending to try to rescue a legacy for herself in an act of such outrageous self-interest that she should be imprisoned for it. Let me tell the Prime Minister straight - you have been sacked. Put your personal stuff in an archive box, return your pass and your work mobile, and leave the building. Do not use your email account. Do not sign off on anything. If you delay, we will have Security escort you out of the building, which will be embarrassing. 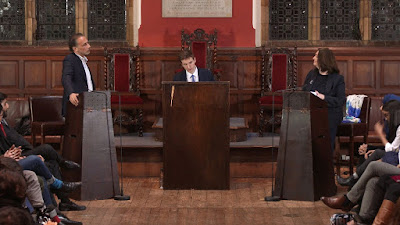 Email ThisBlogThis!Share to TwitterShare to FacebookShare to Pinterest
Labels: ennui

When I look at those leadership contenders, I am reminded of UKIP.

All those earnest blokes who just aren't quite good enough, metaphorically pushing and shoving their way to the front.

Which is all very well, but they are all so equally vacuous, that the winner will be indistinguishable from the other losers.

There is definitely something sinister about the "Canadian", Rory Stewart, he is a socialist.

I couldn't bring myself to watch the junior debating society prattle on about the wonders they would do in the unlikely event they become PM. The only interesting aspect would have been watching Guru-Murthy cope without a genuine lefty to promote - but I guess Weird Rory is close enough to a genuine lefty to qualify for his approval.

Treason May is reportedly planning to push her spending "legacy" through via a Statutory Instrument, since there isn't time or opportunity for it to go through the usual Parliamentary procedures. If she does avoid Parliament in this way, her successor could easily overturn it by revoking the SI ..... if they have the guts, of course. And I doubt they have.

It has been noted that Dominic Raab was given a third less time to answer than the other candidates. The only decent candidate is being deliberately hobbled.

It's telling, that you use an example of what happens in the US when someone's contract ends, but not here in the UK.

Edward - clearly you've never worked in the UK construction industry. 'Sacked' means dismissed for misconduct - which is immediate. End of contract ends in the pub getting arsehold with colleagues. Actually, after a disgruntled QS took time to smash up an architect's model, we used securty guards all the time - from the HR office to the desk to the front door.

May's 'legacy' is as offensive as the proverbial fart left in a lift.

I don't think any candidate can unite the Tories but only one can mobilise a joint Leave machine and see off the Remainers and fence-sitters.

"And the candidate who might feasibly keep the Brexit Party onside is (opens Golden Envelope) Boris Johnson!"

And, she says that she might not go, if the UK's next imposed PM loses a confidence vote.

Ignore the theatre, it is just the ConMen death throes.

There is only one sensible answer Raedwald-Rat Terrier.

Anyone reading it knows exactly what happened, but she wasn't sacked.

I have examples of security escorting people from the building plus locks/entry codes changed...but they weren't 'sacked'.

RE Work references. One I used once or twice was "Nobody has a higher opinion of him/her than I do " - and nothing else.

Addendum - and coming to think about it, that's probably the ref I would give TM

Cascadian - try not to let your hatred and loathing of the many fine things that Britain stands for make you *too* bitter and twisted ;)