A better example of BBC lies and distortion than the '45,000 cows to be culled because of Brexit' I have yet to find. 'Newsnight' put the story out as part of an ongoing and now quite open bias that has seen almost all BBC news output propagating silly 'Project Fear' stories. Even the ex-minister Robert Goodwill in the clip rubbished the story. The first 3 or 4 minutes of this lying rubbish are sufficient.

The simple facts are these. A third of Northern Ireland's milk currently goes to the Republic for processing, largely into cheese. The Republic then exports some 80,000 tonnes of cheddar a year made in part with this milk back into the UK*. After Brexit, there will be a 40% tariff on the milk going south and a 40% tariff on the Cheddar coming into the UK. Of course it won't continue.

The solution of course is very simple - if the EU remain obdurate and refuse to see sense, in no short time some enterprising individual will throw up a cheese factory in the province, making 80,000 tonnes a year of cheddar from UK milk for UK consumption. Result? Jobs, wealth, GDP and taxes for the UK - gainers - and job losses, benefit costs, tax shortfalls and falling GDP for the Republic - losers.

Whilst the new Ulster cheese factories are under construction, the government could buy the milk and give it away to schools, hospitals, food banks, the elderly and so on.

Do the people of Ireland really want us to come to this? Isn't it about time ordinary Irish voters told Varadkar to stop posing and get back to his Kylie fan club posters? 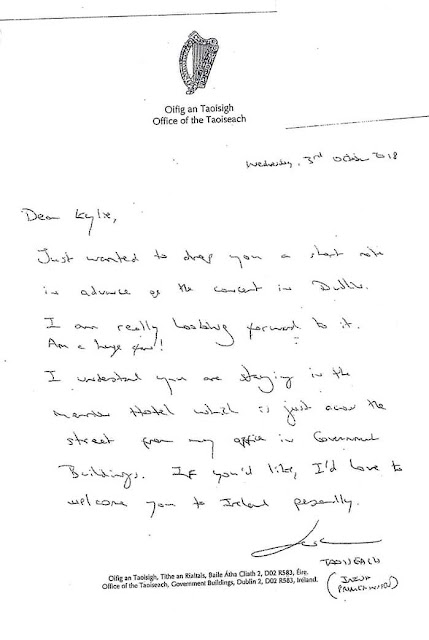 It just shows how utterly cretinous Cameron was, to call a referendum, as a cheap, party political, election gimmick.

For it was never any more than that.

There's already cheese production capacity in NI and even expanding that capacity isn't really that difficult. Or, transport of liquid milk to Wales/England is within the cost as the then finished cheese would already be where the amrket is.

This is simply not an issue and NI dairy farmers have - almost in chorus - poo-pooed the BBC's ridiculous pap.

The BBC, getting more cuntish by the day.

This video by ' We got a problem' expresses my sentiments of both the racist far-left bbc collective and their remoaner guests:

It's about half an hour long and contains some quite descriptive language. It's also enjoyably funny.

As for the fake Odisha, Mr Varadkar, I think he's been put in place by what are termed globalists, to destroy Ireland.
But even the normal, proper Irish are beginning to organise a resistance to what is being done to them.

From where I stand, that cheap party political gimmick may have been how you see it, but David Cameron saw a major threat and he panicked and it was effectively a forced error.

Don't forget that as things stood, UKIP were not going to go away, they were doing the very opposite, they were coming on heavy.

But for people like me who have been living in a country that has been split irrevocably since we lost the referendum in 1975, that cheap political gimmick represented a major deal, that might help redress nearly 50 years of disastrous and inhumane policy that looked far more like a planned state economy than a traditional near free market system.

Don't forget that this first referendum was a cheap political gimmick by Harold Wilson, designed to gain him a majority following the first election of 1974. Of course he let us down just like all the others have done so far in their mad dash towards globalism and communitarianism. It's a good job that I am old and I won't have to watch it all fall apart, it is liable to be violent.

Firstly, in a country that slaughters 2m cattle a year 45,000 is a.drop in the ocean.
Secondly we are under no obligation to charge import duties on anything, and certainly should not do so in food. That the EU likes to shoot itself in the foot is no reason for us to do so.
Should, as seems likely, the EU choose to impose tariffs on what is both a foodstuff and a raw material then other manufacturing capacity will be found anyway.

Wot no steak mountain ?
Dammit I'd cleared the freezer out and everything.
Lying bbc; I thought that could have been my Brexit bonus.
Nature abhors a vacuum and so does commerce.
One operation goes under and someone else will seize the opportunity.
Vacuum packed milk powder is always handy stuff to have on the shelf

Camerons "panic referendum" lifted a stone in this country and out crawled a very large amount of traitors and anti-democrats, the like we have never seen before. People that hate this country and would sell us out to a socialist super-state. It also showed the contempt that most (not all) politicians have for us ignorant plebs.
Jaded


Jaded is entirely correct--now we see the the Ketch's the Cheesy Edwards the JPM's. After Brexit such creatures must become the targets of ongoing investigation. To destroy the scummy middle class left and their globo elite owners.

Jaded & Mr. Ecks
Yes and their barefaced brazen treachery is there for everyone to see and they cannot walk it back.


I often wonder what the incentive/reward is for those traitorous scum that are so keen to see the UK subsumed into the Globalist scheme - are they all Common Purpose shills or wannabe's perhaps? If life proves anything it's that no-one does anything for 'nothing'.

In regard to the BBC - how do they explain their lack of 'balanced reporting' when I doubt anyone, anywhere could point to a BBC article that shows any benefits of leaving the EU - for which there are many. Not a single article or announcement. Zilch. So much for their Charter (again).

The lies perpetrated to pepetuate the EU-is-good/UK-is-bad myth are almost as ridiculous as those used to scare us into believing the world will end in 12 years due to CO2......

Are there any people, anywhere, in any country, towards whom the Leave fanatics actually have goodwill?

Apart from gun owners in the US, that is?

"gun owners in the US"

Who presumably are the only people in the world you hate more than anybody who voted leave.

No, most of my drinking mates in the village local are Leave voters, Mark. There's only the odd nutter amongst them too. That's why I think that you are wrong about all this claimed anger on their behalf.

The internet is unrepresentative of normality, generally.

Thus speaks the living proof of his last sentence.

"I'm the only remainer in the village!"

I was trying to picture you and thanks for clearing things up.

No, we're about thirty-seventy, which, for that locality, is about what you'd expect.

If you were in one of the great cities then it would be reversed, but whatever, fanatics and conspiracy theorists like you lot are in a distinct minority where I spend a fair part of my time.

Yep, if you can't tell who the sucker is, it's you.

We all know who he is, Mark. And he's a Leave voter. Everyone's mug. Lost his pension on a timeshare scam.