O'Shaughnessy and Tanner - Trashed by their own spin

I do love our informed public. This is the story. Either the think-tank 'Onward' or the website 'Politico' commissioned a large poll from Hanbury polling, one presumes to support an opinion they wanted to promote. The poll didn't quite produce the results they wanted. The two blokes behind 'Onward' are soft remainian ex-SPADs, so they weren't going to let that stop them. They penned a piece for the Telegraph - poorly written, semi-coherent. It barely lasted 12 hours online, uninamously rubbished by every single one of the BTL comments, before the paper decently buried it. In addition, at around 4pm, ten hours after our own piece below, the guido fawkes site trashed the whole thing 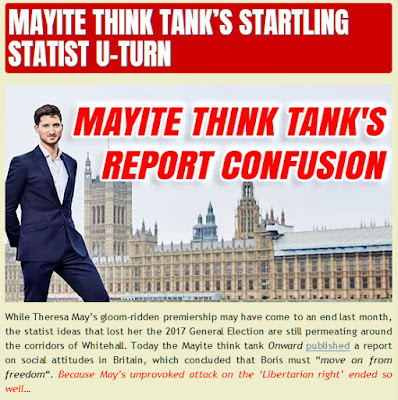 James O’Shaughnessy and Will Tanner must be feeling like a right pair of dickheads today. The BTL comments on guido are, as you would expect, considerably more vicious than those that the Telegraph has now buried. I was wise yesterday to refrain from commenting on the pair's spin until I had sight of the polling data. It really doesn't support the narrative they want to promote.

A poll of 5,000 respondents, even conducted wholly by smartphone, is expensive. Who paid for it? O'Shaughnessy and Tanner claim it was them -

But Hanbury Polling say it was Politico

Overnight the polling data - what we'd all been waiting for - appeared on the Hanbury website. It's good, a rich source of evidence for many posts ahead. But not posts that will support the hapless pair's agenda.
at 05:30

The polls were long ago weaponised by the left. Remember Killery and her 93% certainty of victory? Remember Brexit vote day of Blessed Memory?

Trust nothing pollsters tell you.

Oh, I remember being in the pub, and that exit poll on June 8th 2017. My sides are still aching.

They were right at least. So were some of those re the referendum. The result was easily within the margin of error.

It was exactly as others, such as Dennis McShane and myself had expected going back to 2010 too.

That would be the Dennis McShane imprisoned for fiddling his expenses.
"by their friends ye shall know them"

You're either in front of Guido or behind ...LOL. Most don't realise at least 50% of the stories originate from the comments there. Good political tittle tattle though.

JPM and Denis McShane, who'd a think it?

Yes, the very same. It's interesting, that although the amount fiddled by Tories was far greater, and there were more of them at it, only Labour MPs went to prison.

He was right about the referendum though.

I worked in the private sector for a time, where there was a culture of "maximising" expenses claims. You just weren't One Of The Lads if you didn't do it, it appeared.

In my opinion, it's a pity that all the cash-in-hand tax dodgers, who are just as bad, don't go to prison too. Oh, and lose their votes while they are there too?

PS, I'm not personally acquainted with McShane, it's just that he and I were among the minority back then saying that any referendum here would result in the UK's leaving the European Union, and by the same reasoning.


You are fellow socialistic scum who support a death cult with 150 million murders to its score.

Not a fan of polls, but those nefarious populists at Breitbart have come to some surprising conclusions.

Your mileage may vary.

I too worked in the private sector for a very long time, in an activity where fiddling expenses and inducements was an ever-present possibility.

The only (two) individuals who I saw play the system, blatantly and for all it was worth were senior employees of that cradle of social justice and the labour movement - The Co-oP!

...and how many cash-in-hand traders have you encountered, plantman?

I wouldn't have called Anthony Steen a lefty, would you?

Ecky, I'm opposed to all religion, and the more vicious and fervent it is, the more I oppose it. That includes the One True Faith of Brexit these days.

I'll let the Buddhists off, perhaps.

So why do you have such a messianic belief in the EU then?

JPM, are you the wanker that ran the Very British Dude blog?

Anon 02:46, I don't think so, Jackart (much like Raedwald linked to my blog for at least a decade) definitely changed for the worse though, after the referendum.