Robert Hardman in the Mail profiles Martin Selmayr this morning. Amongst the revelations that we already suspected is that "(Selmayr) will certainly play a key role in determining the sort of Brexit we are offered. As one Brussels insider put it to me: 'If Martin has his way, it will be not so much a deal as a punishment beating.' "

I was looking back this week at a collection of lithographs on flimsy paper published in December 1918 - almost a century ago - by a Belgian artist who had been confined along with French and British soldiers in a German POW camp. Turning the fragile leaves, one is immediately struck by the extent to which these German WWI POW camps were a rehearsal for the concentration camps of the NSDAP era. The brutality, the wire, the watch towers, the starvation, the random shooting of prisoners and, yes, the punishment beatings are all there - a prototype for Dachau, Belsen and Theresienstadt.

Here is a lithograph titled  'der Schlag'. It is, no doubt, illustrative of the sort of punishment beating that this 'modern' German Chief Official would like to administer to Britain. With Selmayr, Europe has regressed one hundred years. 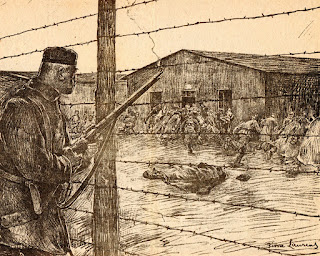 Only the fascists and Marxists will gain from a bad Brexit

Allister Heath in the Telegraph (£) firmly connects hammer to nail this morning;


The consequences of a Brexit betrayal would be catastrophic: there would no longer be any halting the tide of anti-establishment fury that has been building since the early 1990s. Support for mainstream parties would collapse and new ones would emerge. Yes, a centrist business-as-usual grouping may well be one of those that arises from the rubble, but its supporters – the Remain metropolitan base – massively overestimate its potential. It would be small, little larger than the Lib Dems are today. Sadly, the libertarian yet Eurosceptic party of my dreams would be even tinier.

The real winners would be nasty, European-style extremist parties of Left and Right that would desecrate our public life. The polling is depressingly clear: swathes of people would vote for a new authoritarian party under certain circumstances, while there is extensive support for hard line socialist positions. The poison of far-Right and far-Left demagoguery would contaminate our body politic, as has already started with the rise of Corbyn and anti-Semitism in the Labour Party; and just like in other countries, millions would end up voting for detestable people with repellent ideas.

In refusing to accept the referendum result, in this constant, febrile, attritional campaign against cutting the ties to a failing Federast empire, the country's supposed elite are acting like purblind idiots. They are blundering in their arrogance into a place in which the politics of hate, fear and force drive out the freedom and liberty we have spent centuries building; the repulsive bullying, authoritarian racism and vicious spitefulness of far right and far left would crowd-out fairness, decency and tolerance.

Heath concludes his piece with the one question we have all been asking for the past two years - if the elite are so bloody intelligent, why are they fighting to ally us with the EU?


Mainstream, popular policies of the kind routinely embraced by self-governing countries around the world could nip the extremists in the bud and give the Tories 45 per cent of the vote. Why can’t they see this? And why is the establishment willing to gamble everything for its irrational love of a failing super-state?

With a deep sneer of contempt across his twisted face, the unelected official in charge of sabotaging Brexit faced down MPs yesterday. His expression says it all. 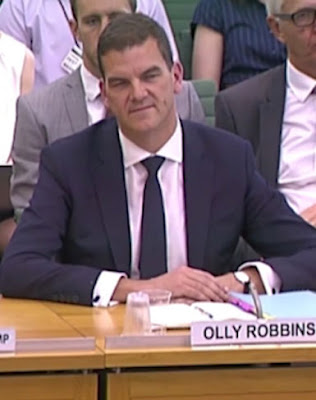 WE have had an unequivocal assurance from Mrs May in the past few days that there will not be a second Brexit referendum. Of course, that means nothing. Mrs May's past assurances on the Customs Union, free movement and ECJ jurisdiction have been over-ruled by the elite establishment, and today no assurance from her on a second referendum means anything unless confirmed by Oliver Robbins.

The BBC is giving much airtime to anyone calling for a second referendum at this time because the polls have been swinging towards 'Remain'. However, the polls are close and erratic, and could easily shift back. The most recent, from 14th July by Deltapoll, shows 50/50 but this could be a rogue. 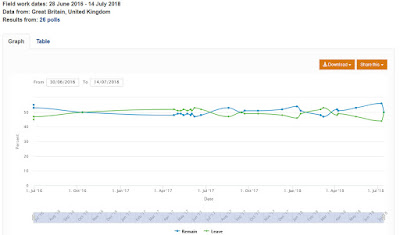 Yougov however cautions against relying on polls re-asking the referendum question;


However, just because people think Brexit is the wrong decision, it doesn’t necessarily mean they think it should be reversed. They do not. When we ask what people think the government should do about leaving the EU, just over half (53%) think that it should go ahead with Brexit, mostly on its current course (42%) though 11% would prefer a softer Brexit. A fifth (21%) think that the government should call a fresh referendum instead, while 13% would prefer them just to halt Brexit altogether.

Neither is there much support for other means by which the decision to leave the EU could be reversed. By 50% to 29% people think it would be illegitimate for MPs in the House of Commons to vote against Brexit going ahead, and by 45% to 37% people oppose the idea of another referendum once the terms of the withdrawal negotiations are known.

With confirmation that Vince Cable has been in talks about a new Limehouse Declaration to save the rapidly dying LibDems, offering a broad leftist Remainer umbrella, there is also a poll suggestion that a new pro-Brexit party could get 38% of the vote and rumours that Nigel Farage is in funding discussions to form such a party to attract both Conservatives and the lighter mauve UKIPpers.

And with confirmation expected today that Labour will officially go anti-semitic and all the little lefty Nazi Corbynistas can trample the Star of David, the old parties are hardly helping to preserve political stability.