The spin on the spin

There's been something of a triumph of spin on the EU's MFF share-out. Oh I don't mean the headlines, which we summarised last week, but the rationale. Spain and Italy get the biggest share for the next seven years because they have been hardest hit by Covid, the spin went. And hardly anyone said "Hold on - Covid hasn't gone. What if Poland goes down next year, or the Netherlands?"

Of course, as Rutte and Kurz know full well, Covid has been the cover for propping up the generous but unaffordable pension commitments in Spain and Italy. I told my old mate in the pub last night not to worry - Germany was paying for the mad Med pensions. He was just paying for Slovenia and Croatia. "What?

Austria pays €14bn into the MFF; Slovenia gets €1.2bn and Croatia €12.1bn. That's €1,580 from the purses of every Austrian and €2,969 into the wallets of every Croatian. "Croatia? Why do they need money? Have you seen the price of property there now? Their hotels cost the same as ours and are more fully booked, their trains are new, new stations, bridges - we paid for all that already".

I have my own suspicions - and they're around Tito's old nuclear power plant at Krško (say Crooshgo), shared between Croatia and Slovenia, due for decommissioning from 2023 but now extended for another twenty years. The EU insists it's safe, but our nuclear leak (and other civil emergencies) warning sirens are still tested every Saturday at 12 noon, and most folk have a 7-day course of Iodine pills in the first aid box.  More specifically, Croatia has a contractual obligation to take 50% of the nuclear waste by 2025, hasn't got anywhere to put it and Slovenia has run out of storage. That's my guess, anyhow.

That's the sort of thing that Covid is helping to hide. Don't tell the tourists headed for the Adriatic beaches that there's a nuclear waste dump behind the hotel, don't tell the punters hard at work in Munich that their taxes are being drunk by Luigi and Alphonse sitting in the sun outside their tavernas. Hey ho.

Could Covid save the Green Belt?

At engineering school we learned one of the costs of the black hole that is London, whose gravitational pull was once so great that everything in the island was drawn inexorably into its maw. In this case it was sand and aggregate - an effect known as the Aggregate Drag.

Essentially all sand and gravel quarried in the south-east is delivered in the direction of London; gravel from Chelmsford will go to London, gravel from Ipswich will go to Chelmsford and gravel from Diss will go to Ipswich. Likewise roadstone from the Midlands and the north is always (in aggregate, ahem, terms) delivered southwards. So pernicious are the economic and transport infrastructure effects of this drag that interventions have frequently been made with the intention of by-passing the movements. London plans have preserved sand and gravel wharves right in the heart of the city, from Deptford to Richmond, to take millions of tons of traffic from the roads radiating to Kent and Anglia. The aim is to take gravel from Diss and such parts direct to London and leave Ipswich and Chelmsford supplying themselves. Railheads have been established in Scots 'superquarries' that hollow-out entire mountains to send millions of tonnes of Scots roadstone directly into coating plants in the heart of London rather than into Northumberland. And so on.

London's insatiable demand for building and expansion led the well-intentioned but over-controlling planners of post-war London, with a masterplan known universally as the Abercrombie Plan, to create a green belt. In the same way as they sought to control Aggregate Drag they sought to control People Drag; establishing a series of new towns on the other side of the green belt. This is an original plan - 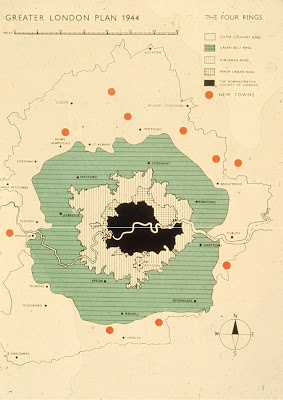 In recent years both councils and developers have been poised with back-hoe excavators at the ready (oh come on - you don't expect us to write 'bulldozers' on this blog ..) at the edge of the existing green belt - always somewhat smaller than the 1944 plan - doing the housing-queue equivalent of shroud-waving. At times it has been doubtful if the green belt can survive. However, Covid could change all that.

In a matter of months we have undergone a decade's worth (in more normal times) of change. The culture wars have left the workplace a minefield in which first smoking then alcohol and finally human contact has been banned as too hazardous. Lawyers and HR departments were in the ascendant, 'micro aggressions' lurked round every corner, and one couldn't even move someone's yoghurt pot in the office fridge without risking a misconduct hearing. You can get away with this nonsense in the BBC and the public sector, where maintaining the right diversity quota is always more important than actual output, productivity and efficiency, but the new mores have hit the private sector hard.

Covid has actually come as a welcome shock-adjustment for many firms. Overnight whole legions of HR executives monitoring breaches of fridge-etiquette are redundant, as are lawyers taking on yoghurt-pot cases for no win no fee. Workers can crack a beer in their home offices without breaching company policy, and hug their spouses or significant others without risk of disciplinary action. Of course we have still to work out some important stuff like how employer's liability in law will work if a home-worker trips on a printer cable, whether home offices are lawful in planning terms, who will pay for the heat, light, power and water consumed to the firm's benefit by household-based workers and so on. But such solutions will come.

More significantly, housing demand in and around London will start to fall. If you can work remotely from Harlow, why not Bishop Auckland? Or Austria? And if housing demand falls, then so will pressure to develop the green belt. Covid could turn out to be a very green disease.
at 07:51 13 comments: