Reasons to be cheerful

That the Conservatives are really annoying not only the comrades but elements of the authoritarian alt-right means the party is getting it right. That the PM is a one-nation libertarian much like myself gives me a good feeling, and gives little traction to an attempted counter-reformation move last week by Hammond, Gaulk and their media supporters. These supranationalist dags of the global corporates could only accuse the PM of being 'authoritarian' - a frankly laughable accusation. Sweeties, a strong and confident libertarian remains a libertarian.

We have a cabinet adjustment due in the autumn and we know already that David Frost is due to take over as National Security Advisor in September. The triumvirate at the heart of change, the PM, Dominic and Michael Gove, will be strengthened. Reform is high on the agenda - the NHS, PHE, the Electoral Commission and the BBC are already scored, and the Integrated Defence Review should be ready to report. So Health and Defence are key cabinet seats to watch.

As Nick Drew has for some time pointed out over at C@W, green energy is now going mainstream. Business is taking it on in a big way. And here again our reclamation of our 200 mile EEZ should stand us in good stead. The shallow North Sea, and in particular the Dogger Bank, most of which is British, make offshore wind an easy win for the UK, to an extent that could surpass our daily grid demand. At night, when we're not using power, it can be used to make Hydrogen, the combustion fuel of the future. And all those empty North Sea wells also in the UK zone give us a fantastic storage potential for CO2.

Green has broken free of the XR cranks and has gone mainstream. And the public, the voters, have also accepted this is the way to go.

In the Culture War, the PM's open refusal to kneel to imagined guilt gets the support of 67% of the British public, and of all libertarians, and leads a pushback against the tyranny of the metropolitan mob. Little Owen Jones, a spiteful and vicious leader of the Cancel culture, may have realised in a Marat-moment that the hate could turn back on him. In 1793 Jones would have been the shrieky hysterical little sans-culotte offering head after head to Madame Guillotine.

For the financial backers of the several attempted blows against the government, you've lost your money. These pushes for power either succeed at first instance or they fade and falter into background attritional noise. The attempted coup around the orchestrated attempts to get Dom came closest, but exposed the key players and marked them for later disposal - to be sidelined into irrelevance, excluded from the circles of power, briefed against and so on.

Of course we've still got the collapse of the global economy and a lethal pandemic virus to crack, but all in all things look good. Many reasons to be cheerful.
at 05:33 32 comments:

Public blunder - it's Crimea all over again

A tempest is blowing through the complacent hubristic corridors of power in Whitehall. They have been tested and have failed utterly and humiliatingly, and now they must face the gales of change.

NHS central procurement and NHS and PHE central testing, we were told yesterday, wasted £25bn due to incompetence, a confused commitment to central command and control, a concentration on fashionable management nostrums and jargonistic pabulums rather than on efficiency and effectiveness. It was the rule of dire and dismal senior managers with a focus on reducing sugar in breakfast cereal rather than saving lives. It is the grossest and most culpable mismanagement; indeed we have seen nothing like it since the debacle in the Crimea exposed the manifold failings of army management.

You may know how the media and the telegraph shone the disinfectant sunlight into the dark establishment corners of mismanagement, blunder and stupidity in Crimea. Medical and logistic failures. Troops with no tents or winter clothing, no means of preparing food hygienically, inadequate medical care, flogging at the wheel, a system of buying commissions that left the army in the command of idiots and fools. The British public at the time were outraged - but the establishment aristocrats who ran the army closed ranks and blocked all attempts at reform, for a while at least. It took Prussia's thrashing of the Kermits and an establishment panic that eventually allowed Cardwell's reforms of 1870 - 1881. Barely a generation short of powered flight and the cinema we stopped flogging servicemen.

The Whitehall establishment will make the same impassioned defence of their blunder, malfeasance and incompetence as did those cretin generals back in the 1850s. They are as far out of their depth now as they were at the time of Crimea. They have no place in office, no place in power, no place in control of our taxes and no place in a democracy with a government with a mandate to cleanse them.

Many who have business or overseas contacts with not only Chinese but many people from SE Asia will know the importance of 'face' - and of saving and losing face. The raucous, primitive, violent and abusive nature of social media is not a happy place for those with such sensitivities, yet several times, normally after I have criticised China, I have received a wounded but polite little note. I suspect they're from Chinese students doing their compulsory two hours a day on the interweb defending the motherland - 'chide gently to bring offender onto path of righteous truth' or something. Yesterday China avoided the stigma of sanctions for human rights abuses announced by Dominic Raab in the Commons against named officials. The loss of face if Chinese individuals are named as human rights abusers would be grievous.

He certainly managed to hit a spot with Russia, KSA, Burma and North Korea, though only the first three pretend to be liberal if not quite democratic. Chinese executions, concentration camps, organ harvesting and repression haven't earned them this disgrace as yet - maybe we still need their PPE. The latest repressive security law imposed on the people of Hong Kong literally encourages the book burners - books condemned by the Beijing regime are, even as I write, being seized and destroyed; Hague writes about it in today's 'graph.

It is however Russia and China that are stoking the fires of the Culture War on the internet in an effort to destabilise the West. Whilst naive and credulous children are rioting on the street in London because someone called a trannie a tranny on the interweb, Sergei Magnitsky and Jamal Khashoggi, a lawyer and a journalist, were being murdered by their own state officials.

And it's partularly important to distinguish between people and regimes, between holy Russians and Putin's gangster regime, between China's Beijing autocrats and the people of Hong Kong. These subject peoples simply don't enjoy the democratic freedoms that we take for granted; the rampant voting corruption even in Putin's most recent referendum on his own tenure is accepted with just a shrug of the shoulders.

Whilst I'm encouraged by our finally moving out of the twentieth century and into one in which GRU assassins and CCP executioners, Korean torturers and Saudi head-choppers are not only unacceptable but that such actions have consequences, we cannot be complacent about the threats that such rogue nations pose to our liberal democracy. At least it seems we now accept that China, Russia, KSA and the like are not benign regimes but threats to our way of life. Now we must reform our economies to stop selling them arms and technology and buying from them factory goods and fuel that are killing their own citizens and undermining ours.

The global corporates have been quick enough to respond to inconsequential movements such as BLM. Let's now test them with a commercial and trade policy in line with an ethical foreign policy when human lives and human freedoms rather than hurt feelings are at stake.

I trust you all had a decent weekend and hope that many of you managed a visit to the pub. The pub, of course, is far, far more than just a sector of the entertainment industry - it is local democracy in evidence, a temple to free speech and expression, free from the constraints of remote censorship but subject always to peer evaluation. Drunk people may be incapable of maintaining social distancing, one police service senior manager opined, and undoubtedly for many who managed to get a leg over at the weekend there will be a degree of gratitude for this grievous failure.

The question this morning is what is the difference between an aircraft and a theatre, in epidemic terms that is? Why is it OK to sit close to a group of people for several hours in an aircraft but not OK to do so in a theatre? I suspect there may be an answer in the air filtration and circulation systems, but it's hardly convincing.

It seems we've found the path to living with Covid some months after other nations - testing, testing and testing. Sweatshops, meat plants, overcrowded housing and other risk environments will all incubate new outbreaks, but the more swiftly we detect and contain them, the more the rest of the economy can attempt to recover before the big dip hits.

One final tiny point is niggling at me. Is the imaginary line that separates the legal and administrative jurisdictions of Scotland and England a border or a boundary? I'm genuinely not sure. 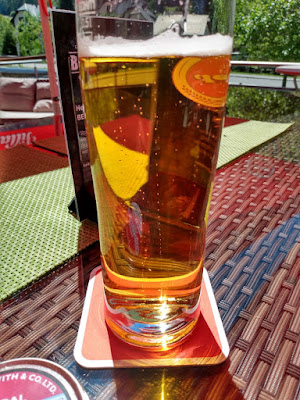