More and more intelligent voices are being heard condemning the calculated subversion of democracy by the highest echelons of the civil service. They've been roundly rumbled - and now we must watch their every move to guard our precious democracy from their cynical and unscrupulous corruption. Let there be no mistake - it's not swivel-eyed loons who are cataloguing the depths of their malfeasance, but a convergence of academic, journalistic and social media commentary that is exposing the raw power-mongering of this unelected elite. As the academic David Blake writes in the Telegraph (£) -


In short, the White Paper is not intended to be the final stage of a transition to a "softer Brexit", but rather the first stage in the establishment’s campaign – led by the senior civil servants at No. 10 – to reverse Brexit.

One strong piece of evidence for this comes from the fact that was an “alternative” White Paper being prepared by the Department for Exiting the European Union. This was developing the “Canada plus plus plus” free trade deal, the only sensible deal consistent with the referendum result. This proposal was trashed by the No.10 civil servants which led to David Davis’s resignation. The same civil servants now want to close DexEU down.

Then add in the deliberate incompetence of the UK’s negotiating strategy. Triggering Article 50 before we were fully prepared. Agreeing, in the context of the fixed two-year time frame for the negotiations, to the sequencing of the three stages of the negotiations (divorce, withdrawal and future relationship) where the EU alone determines when each stage is finished. Agreeing to pay a £39bn divorce bill before any trade deal was in place. This is all part of the Mad Hatter’s strategy. Lord Kerr, the British civil servant who drafted Article 50, said that he deliberately chose the short two-year time frame to make it virtually impossible for any country to leave the EU. Lord Heseltine said on the day after the referendum that Brexit would never happen.

The final piece of evidence was the immediate call from strong Remain supporters for a second referendum with three options – accept the terms of the White Paper, go for a “no deal” or stay in the EU – whose only purpose would be to split the Leave vote.

The price of democracy is constant vigilance. US readers will wonder why these senior officials are not being dragged before Parliament; Congress or Senate would not be so lenient. But Westminster is not Capitol Hill. Despite 400 of 650 Commons seats having voted Brexit, and 82.4% of UK voters voting for the two main parties in 2017 both of which had Brexit as a manifesto commitment, most MPs quietly support the coup being attempted by our civil servants.

We leave the coup plotters a warning. You violate British democracy at your peril - so long as we preserve universal suffrage and the secret ballot, we can still have your heads on the block. Democratically and literally if we have to. And that applies to any guilty ex-MPs a new Brexit election displaces.
at 09:45 14 comments:

Boris gives May one last chance to ditch Oliver Robbins

With, I must say, unexpected Statemanship, Boris yesterday ended his resignation speech not in the manner of Geoffrey Howe but by calling on May to ditch the siren voices of Oliver Robbins, Jonathan Black and the  other Viziers of the Europe Unit and return to her Lancaster House vision. You can be sure that speech was not written by a colourless, robotic EUphile mandarin in love with the power of officialdom but by someone with a deep love for their nation, confidence in the British people and with hope for the future. None of which three traits are remotely apparent in the higher echelons of the civil service.

Allister Heath in the Telegraph (£) pretty much has it today -


Too many ultra-Remainers think that those who voted Leave suffered from “false consciousness”, that they were duped, manipulated or conned, that they will eventually tire of the exercise and roll over, and that a Brexit in Name Only – or even pretending that the referendum never actually happened – would allow the natural order to be re‑established.

This is delusional nonsense, the kind of attitude that would have been prevalent in the court of Louis XVI after the Bastille was taken; tragically, it is also the advice that May has been receiving since she sidelined her Cabinet Brexiteers and entrusted her entire strategy to the civil service.

It's now certain that May will go - but at a time of her successor's choosing, not hers or her Grand Vizier's. She has only one chance to avoid either the UK crashing out next March without a deal or a humiliating request for an extension of Article 50 - and that's to do as Boris says. Move Mr Robbins to head up the Ascension Island Development Corporation, disperse the highers to Agriculture, Transport and Local Government, and send the rest of the Europe Unit back to DEXEU and Dominic Raab.

One chance, Mrs May. Don't blow it.

No Brexit today - I just can't do it.

Off to Spain, then. I can just remember fascist Spain under Franco in the early 1970s - desperate poverty, asses carrying goods rather than the Commer vans that we had, wrinkled grannies in black doing dreadful things to children, fear and religious superstition, the secret police, and Franco's victims uneasy in their hidden graves. We had 10cc, Suzi Quattro and Genesis. They had torture. It was a third-world fascist shithole. Growing-up seeing the depths of degradation that far-right zealotry could bring to a European people, Spain left me with a lifelong hatred of fascism, far right authoritarianism, the racial purity nutters, the National Front (in those days) and anyone who wanted to control what I did with my own willie. I cheered when Franco died.

Years later, in the Easyjet age,  I saw the forensic tents over pieces of undeveloped scrubland beyond the city boundaries, exhuming the victims of Franco's death squads before the pile-drivers moved in to buid new apartments or industrial sheds. The sight moved me beyond words, and cemented my loathing of fascism.

Now Franco's raddled corpse itself is to be removed from Valle de los Caídos, a vast egoistic memorial to Franco and the unknown rapist. Well, good. Except, as politico-eu reports, the fascists are still with us, protesting at the desecration of their saint. At least it seems that the lady-fascists shave their pits these days, or perhaps the boy-fascist to her right is hiding her pit-hair under his nose?  Hey ho. 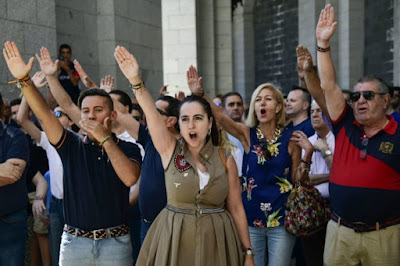 
"The Europe Unit’s mission is to support the development and execution of the Government’s strategy for an orderly withdrawal from, and establishment of a new partnership with, the European Union. Our main roles are to:
+++++++++++++++++++++++++++++++++++++++++++
It's no wonder David Davis resigned when the full extent of Theresa May's duplicity became clear. She has nurtured her own 'Remain' unit at the heart of the Cabinet Office to work against everything that DEXEU was trying to do. When Jonathan Black was pictured shmoozing cabinet ministers at Chequers whilst selling the Robbins White Paper, a document unknown to the department that should have written it, you knew a coup had just taken place. A coup led by EUphile mandarins against not only elected members, but against the democratic mandate given by the people of Britain.

We should have picked up the signals back in January, when a gloomy, pro-remain economic assessment was 'leaked' from Whitehall;  DEXEU denied any involvement, and the finger swiftly pointed to the Europe Unit. But no mandarin was ever moved or dismissed - and we can now speculate whether the 'leak' was not authorised by Theresa May herself as part of a covert campaign against her own cabinet.

Again, at a meeting of EU defence officials, they were joined by another Europe Unit mandarin, Alastair Brockbank, who told them under conditions of strict secrecy that they should 'count the UK in' to their EU PESCO defence force plans, so confident were these mandarins of sabotaging Brexit. And now we have a furious Airbus, manipulated and induced by the Europe Unit into launching a 'campaign Fear' assault on Brexit only to learn that Airbus has lost out to Boeing in replacing our E-3 'Sentry' aircraft.

It is simply intolerable that we should nurture this nest of vipers at the heart of government. The Europe Unit ARE the Enemy Within. They are implacable enemies to our democracy, as dangerous as the 'Spycatcher' nutters in MI5 MI6 in the 1960s who plotted to overthrow Wilson. Except now they are not just plotting - they are actively working to overthrow our parliamentary democracy. It is unforgivable that Theresa May has allied herself with such vipers. She, and they, must go.
at 06:34 23 comments: