Liberalism is not dead - it is being reclaimed

President Putin hit a nerve with his deliberately provocative pronouncement at the G20 that liberal democracy was dead. He is wrong. Democracy everywhere in the developing world is strengthening; political engagement is growing, consciousness of the issues is awakening, citizens are becoming defensive of those seeking to rob them of their hard-won democratic rights.

However, what is dying is the illiberal hijacking of Liberalism; a hijacking that has given us and continues to give us moral relativism, multikulti, the erosion of social culture and identity, the growth of 'benign' authoritarianism, the destruction of competitive capitalism by global corporates, rule by unelected functionaries, the abnegation of control to unaccountable supranational bodies including the EU, UN and IMF. What must die is this perversion, this abomination - illiberal authoritarianism.

We must suffocate fake-liberalism's parasite actors - the fake charities, NDPB's answerable to no-one, the Soros funded underminers of our nations and cultures, the destroyers using self-identity to undermine the values of developed nations, a compliant print and broadcast media, a global social media enchained to illiberalism and repression.

Putin is a thug who rules by terror, secret police, political assassination and brutality. He is certainly no champion of our kind of Liberalism - free speech, freedom to associate, freedom from State interference. Putin and the authoritarian Statists of the EU are actually not so far separated; they are united in anti-democracy, in riding roughshod over the people to maintain a corrupt cabal of unrepresentative bigots in power. Tusk made his usual plea for the supremacy of the 'rule of law' as all monsters do - forgetting that it was the 'rule of law' that made quite legal the sending of scores of children to the fallbeil by Roland Freisler. As Lord Sumption has succinctly demonstrated, it is not law that should rule but democracy, not legality that should triumph but justice.

There is little justice either in Putin's Russia or Tusk's EU. But hold onto your arses, gentlemen; we are reclaiming democratic Liberalism from the frauds and shills. We are coming.
at 05:44 24 comments:

Lord Sumption ended this year's Reith lectures - the finest in my memory - with the conclusion that, in the struggle between law and democracy, it was democracy that should take precedence. He was particularly concerned over 'dynamic' arrangements such as the ECHR, which is not a fixed, static agreement but which changes and evolves over time, committing its signatories to compliance with whatever changes are made by the European Court of Human Rights. The scope of law that the ECtHR has permitted itself to enact is not limited or trivial, certainly not limited to the basic rights to which we signed up in the 30 articles of the UDHR in 1948 (the UDHR is not a dynamic treaty); as Sumption said, ECHR competencies now include ".. the legal status of illegitimate children, immigration and deportation, extradition, criminal sentencing, the recording of crime, abortion, artificial insemination, homosexuality and same sex unions, child abduction, the policing of public demonstrations, employment and social security rights, environmental and planning law, noise abatement, eviction for non-payment of rent and a great deal else besides." All of which should be, for the UK, matters for which our Parliament should be legislating, not taking Euro judge-law.

As the Telegraph reports, there is now a show-down between the EU and Switzerland. The essential cause is Switzerland's rejecting a 'dynamic' treaty back in the 1990s and the EU's determination that she should now surrender to the EU effectively making Swiss law -


... the EU favours “dynamic alignment”, which means that the Swiss would be forced to accept updates of the EU rules they have aligned with in return for market access. It is a long-standing EU frustration that this wasn’t negotiated in the 1990s. The reason was of course the deep Swiss attachment to democracy and suspicion of agreeing to accede to EU rules that aren’t properly understood.

The EU also wants Switzerland to sign-up to the jurisdiction of the ECJ in disputes - also something that the democracy-loving Swiss have hitherto refused to do.The ECJ is NOT a court of justice as the anglophone world understands the word - it is a court of federal alignment, a political court whose mission is explicitly to further the integrationist political agenda of the EU zealots. Again, as a political court its evolution of the law is 'dynamic' and it overturns, muddles and distorts previous judgements when some new federast opportunity presents itself to the court.

Beware the EU, but at all costs beware the EU's 'dynamic' laws and agreements - we should abnegate not a groat of independence to these jackals, concede not a single EN millimetre without the British parliament having jurisdiction. They are trying to build an antidemocratic empire, and Europe's democracies - with the United Kingdom and Switzerland to the fore - must stand firmly against them.
at 05:51 30 comments:

Young people want to live in cities, and young doctors are no different. This is true not only for the UK but for much of Europe - and in Europe the effects of rural depopulation are far more pronounced. It is this metro-centricity that is being blamed for what the Telegraph terms an alarming crisis in rural NHS GP provision. Yet not everywhere that experiences rural depopulation also experiences GP shortages - here in Austria, for example.

A shortage of GPs in rural areas can only be because of two reasons. Either the nation does not have enough GPs, or we have enough overall but imperfections in the GP employment market create surpluses of GPs in the cities and shortages in rural areas. In the UK, both problems can be laid at the feet of NHS mismanagement. It has failed, just like any centrally planned economy. It has failed because the NHS distorts the employment market.

Here in Austria everyone pays into social insurance firms - there are several - that also run hospitals and clinics. GPs are self-employed, and hang their shingle wherever they judge they can earn a living. Some GPs have more than one surgery. Commonly, they work alone - which is not a problem when they're away on holiday (which is frequently) as insured citizens can use any GP; there's no such thing as being registered with just one. Consequently, their skills are offered to the market on very much a commercial basis; If I like Dr Musterman, I can take my business to his ordination, if not I can see young Dr Wächter down the road. An E-card confirms one is insured. For each visit, the GP is paid €18.86 by the social insurance firm and the insured pays a premium of €3.77 on their insurance cost. Of course there are central government subsidies in various forms to the social insurance providers so it is not wholly like the US insured model (for a start, my health insurance is only about €45 a month), but this mix of health by both tax and free market mechanisms works - at least to the extent of ensuring there are plenty of GP surgeries in rural areas.

You see, the reason that UK doctors give to the Telegraph for not wanting to work in rural and coastal practices - the pressure of high numbers of elderly people - is the very reason that Austrian GPs hang their shingle in such places. Old people are good business, if you're paid per consultation.
at 05:16 28 comments:

"No, I'm not wearing that, sorry. It's ... colourful. And swirly. The pattern is irregular. I always wear a white shirt"

"Jeremy! You're not connecting with people. The feeds say you're too bland. We've got to spice it up a bit. Look, take off the suit coat at least"

"I'm sorry, I don't want to appear on the Television in people's homes as they gather around their cathode ray sets improperly dressed. I always wear my suit coat on the Television. And in the office."

"Ok well let Samantha take it for a quick steam and brush down.

"That's fine Jeremy - now just rest your elbows on the chair arms for a reading, please"

"Where's my suit coat?  Bring me my suit coat please ... can I roll my sleeves down now?" 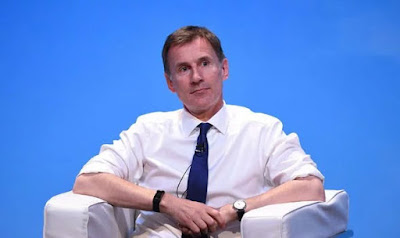 As the sofa wine stain story broke yesterday, as early as dawn it became clear that the perpetrators - the Guardian newspaper and  hostile left-wing neighbours of Boris Johnson, were deeply compromised. Claiming to be concerned for the couple's welfare, Tom Penn called the police. Fair enough. He claims to have knocked at his neighbours' door - for which there is of course no evidence. Now if Penn were genuinely concerned for the couple's welfare, and his story were true, the police having confirmed that nothing was amiss, the sofa wine stain spat having fizzled out, he would have shut up and that would have been the end of the matter.

However, Penn and his American-born wife Eve Leigh were less concerned with their neighbours' welfare than with damaging them in any way they could. Penn handed over a surveillance recording he had made to the Guardian, which ran the sofa wine stain story.

Boris and Carrie have already been subject of a campaign of harassment and intimidation in their home with flyers (pictured below) plastered around the building and on vehicles outside. It is not known whether Penn and Leigh are responsible for these.

We also don't know how the recording was made. In a statement to the Guardian, Penn claims "I went inside my own home, closed the door, and pressed record on the voice memos app on my phone." If his claims that the recording in which the words of a heated conversation can be heard clearly was made in this way, it is extraordinary. Until we have the audio file to analyse, the veracity of Penn's claim cannot be confirmed. It is possible that the hostile neighbours made the recording using professional mics (they are theatre people, after all) fixed onto/into the party wall or floor - and that the clip heard by the Guardian was just an out-take from a comprehensive series of surveillance recordings. Until we have access to the audio file we simply don't know.

Boris Johnson is a terrorist target and an MP and ex-cabinet minister. The police must surely now determine whether he was being bugged by his hostile neighbours - and crucially, whether Penn and Leigh have breached s.58 of the 2000 Terrorism Act -

(1) A person commits an offence if—

(a) he collects or makes a record of information of a kind likely to be useful to a person committing or preparing an act of terrorism, or

(b) he possesses a document or record containing information of that kind.

Then there is also the person or persons behind these leaflets - were they printed or made on an employer's colour copier?

Britain is neither in thrall to the Stasi or the Gestapo and their gangs of block and neighbourhood informants. Penn and Leigh committed an unforgivable breach of privacy at the very least, and possible criminal offences at worst. This is not an end to the matter. 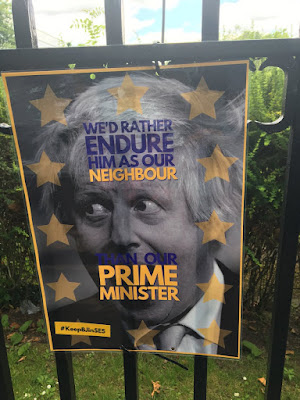