Reactions to Theresa May's Florence speech are predictable. Nigel Farage and Guy Verhofstadt have both slated it, politicians have created varieties of weasel words of semi-approval but the majority in the middle asked of the much-hyped landmark "was that it?"

The avoidance of a cliff-edge and extending our leave date until the end of the current EU budget cycle both make some sense. However, what I was looking for were Mrs May's words on what is to me a critically important part of leaving; re-establishing the supremacy of UK courts. What she said is this:


I am clear that the guarantee I am giving on your rights is real. And I doubt anyone with real experience of the UK would doubt the independence of our courts or of the rigour with which they will uphold people’s legal rights

But I know there are concerns that over time the rights of EU citizens in the UK and UK citizens overseas will diverge. I want to incorporate our agreement fully into UK law and make sure the UK courts can refer directly to it.

Where there is uncertainty around underlying EU law, I want the UK courts to be able to take into account the judgments of the European Court of Justice with a view to ensuring consistent interpretation. On this basis, I hope our teams can reach firm agreement quickly.

In other words, after Brexit the UK supreme court will revert to being fully independent and the judgements of the ECJ will have just the same comparative weight as those from the common law jurisdictions of the Commonwealth and the US, which have long been considered by our supreme court. In fact, the UK has always been more open to the use of comparative law than any of the Code Napoleon nations of the EU. It is therefore the EU that risks isolation from evolving international standards, through a rigid belief in its own politicised court, and not the UK.

In the field of human rights in particular there has been an international convergence between first-world jurisdictions, and human rights cases in the UK have frequently been argued using foreign case-law; a report for the US congress in 2010 quoted the decline of the US supreme court in leading international law and praised the UK, and the then leadership in the Lords of the UK's supreme tribunal;


The House of Lords has, where relevant, used decisions from foreign courts in these cases to compare how the rights have been interpreted. This applies for not only the European Convention on Human Rights, but also for a number of other international treaties. For example, in A v. Secretary of State, foreign cases were used throughout the opinions of the Law Lords, which was considering the use of evidence that may have been obtained by torture. It noted how the Torture Convention had been implemented into the law of France, Canada, the Netherlands, Germany, and the United States. During this case, numerous foreign decisions were referred to—three from the Supreme Court of the United States, twelve from the Supreme Courts of six other countries, and others from international courts and tribunals. Some commentators have noted that the use of so many foreign cases was a “conscious attempt to put the practice of the UK within a global context and to upgrade the common law to modern international standards.” In fact, the approach of Lord Bingham was highly commended by an article in the Law Society Gazette, which provided:


Lord Bingham has performed brilliantly in the job for which he was specifically selected in defiance of the principle of “buggin’s turn”, which would have given it to another. He has stitched the Human Rights Act into the fabric of our domestic law and, in doing so, aligned our jurisprudence with that of an emerging global approach. The breadth of the approach of the House of Lords under his leadership throws into stark relief the decline of its US equivalent … this was a conscious attempt to put the practice of the UK within a global context and to upgrade the common law to modern international standards.

That puts the politicised 'court' of the ECJ in its place, I think. Brexit means our courts will again be free to develop law in line with humankind's continuing social evolution, using the wisdom of the US supreme court and of our Commonwealth cousins, unconstrained by the narrow and primitive world-view of the parochial and somewhat corrupt ECJ.
at 07:27 20 comments:

In the wake of the tube bomber suspect and his chum both having been child migrants lodged in UK homes, I'm wondering how those saintly, selfless givers Yvette Cooper and Lily Allen. who both undertook to house migrant children in their own capacious homes (in Yvette's case more than one) are getting on?

Oh. They didn't actually house any migrants, did they? That was left to ordinary folk, many elderly, whilst our gobby heroines just reaped the kudos. 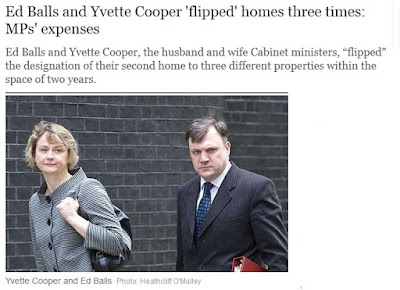 It's extraordinary that folk who can't read a P&L a/c or balance sheet are suddenly experts in accounting, but the media is full of remoaners who are striving to shoot down the figure, referenced by Boris Johnson in his post-Brexit vision paper.

Amongst the remoaners is some bloke who says he is head of statistics. I've read his silly letter - which has been shot down by Boris. His basic error was in answering the claims made during the referendum rather than what Boris had written, and not actually reading what Boris had written before writing his own fatuous missive. The rebuttal from the Orwellian BBC Department of Truth shows that in fact the EU is paying the UK £50m a week, and that there are fairies at the bottom of the garden.

Folks, for the truth go to the EU budget pages. Not what the BBC or the remoaner statistics manager thinks the figure should be, but the actual EU official figures. 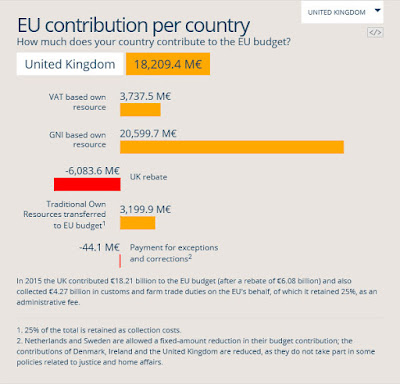 We also collect €4.27bn a year in VAT and duty for goods landing in the UK but passing through to elsewhere in the EU. You could argue that some of this would remain after Brexit and that this should be added to the €18bn.

Either way, what Boris actually claimed about the £350m a week was broadly true - the figure was close, and yes, we will regain control of how it's spent.
at 05:35 11 comments: