Huawei - Why May must go now

The Huawei mess is yet another mess wholly of Theresa May's making. There is a technology cold-war underway between the US and China, and we are being asked to make a choice. Making a choice is simply something of which May is incapable - and so she has repeated, in the case of the UK 5G network, exactly the brainless false-compromise that has betrayed Brexit.

Let's take the US side for half the network, she has decided, and go with Huawei for the other half.

Thus demonstrating her utter, fatal, unquestionable inability to serve in any great office of State, let alone that of Prime Minister. It is an approach so stupid, so flawed, so as to make her previous worst decision, to try to both Leave the EU and Remain at the same time, appear almost cerebral.

Dear God, how did such cretins ever succeed in getting elected?


The Tories, the party of government, are primarily responsible for all of this. We can see now that they installed a Remainer as leader and they negotiated a Remain version of Brexit, behind everyone’s backs. From very early on, Theresa May was sending Philip Hammond and Greg Clarke round to all the multinational corporations to say, ‘Don’t worry lads, nothing is going to change for you’. They promised the multinationals completely frictionless trade, which meant they would be making all kinds of concessions on other things. Brexit voters, on the other hand, were being told they would get the real deal. It’s been a massive con from the start.

Yep we were right all along about the Globalist betrayers in government.

Globalists - Committed to 'Big State' global government, a world-wide constitution and harmonisation of laws and standards, open borders, the primacy of global economic activity and the global corporatists, worldwide legal, judicial and justice systems, abrogation of personal freedoms to a class of unelected appointed experts who will act in the general good, the growth of the 'citizen of everywhere', the rule of benign technocracy and managerialism over 'old fashioned' democracy, the supremacy of supranational State authorities – EU, UN, IMF.
at 04:58 20 comments:

When politicians betray their electors, all trust is gone

No one should be surprised that a Conservative minister who had signed the Official Secrets Act then leaked the outcome of a National Security Council meeting to the press. When ministers, civil servants and politicians have all betrayed Britain's electors, their self-destruction by bitter schism, internal betrayal, back-stabbing, blackmail and vicious in-fighting could never be far away. We are seeing the consequence of a breakdown of both Theresa May's and parliament's moral authority. A biased Speaker acting against the people, lying politicians discarding their election promises, the inane babblings of unelected effete popinjays such as 'Lord' Adonis (if you could buy him for what he's worth and sell him for what he thinks he's worth, as my old ex-NCB tutor used to say, you could retire on the profit) and a State media abandoned by half the population for its lies and distortions are all signs that our patrician class are reaping the results of their betrayal.

The commanders have lost control of their occupying army. All discipline is gone, the troops no longer respond to orders. It's every politician for himself - grabbing what they can in their headlong retreat, pursued by a vengeful electorate determined to clear their stink from our democracy.

Our nation is at a point of great danger. These foul betrayers must go - and make way for a reform, a renewal of our demos, for only a great cull of these patrician betrayers can rescue Britain.
at 07:03 18 comments:


"Global Britain has already happened and it happened through the EU not through nuclear bombs and nuclear submarines .... Brexit is a lose-lose so you cannot make a success of it"

Well, it could be worse. We could be Belgian.

Globalists - Committed to global government, a world-wide constitution and harmonisation of laws and standards, open borders, the primacy of global economic activity, worldwide legal, judicial and justice systems, abrogation of personal freedoms to a class of unelected appointed experts who will act in the general good, the growth of the 'citizen of everywhere', the rule of benign technocracy over 'old fashioned' democracy, the supremacy of supranational State authorities – EU, UN, IMF.
at 11:10 18 comments:

It seems that the Teasack is a dangerous man when left alone with some official letter-paper and a biro. It started when his letter to Kylie came to light; in his childish inward-sloping script Varadkar gushed

just wanted to drop you a short note in advance of the concert in Dublin.
I am really looking forward to it. Am a huge fan!
I understand you are staying in the Merrion Hotel which is just across the street from my office in Government Buildings.
If you like, I’d love to welcome you to Ireland personally

Now journalists want to see a letter he wrote to Melania Trump - but the Teasack's officials, wary of more cringemaking gushing being revealed, are so far refusing an Irish FOI request on grounds that it deals with 'International Relations'.

However, we can take a stab at the likely content;

How wonderful you looked today! How do you get your hair like that? You must tell me your secret. In fact, we should be besties and share all our secrets - I do a thing with yoghurt and cucumber peel which is very good for the private places! I loved your shoes - I could die for the chance of Manolo Blahviks like that, with the cute little bows!

Anyway must dash - Jean-Claude wants me on the phone (boring!)

Further requests are to be submitted for copies of the Teasack's letters to Beyonce, Lady Gaga and the blond boy from 'Talent'. 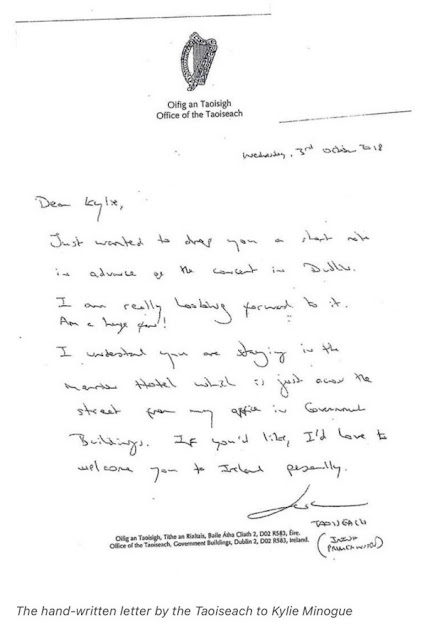 I have commented before on a deeply protectionist, almost corrupt, culture of business in the EU that appears to offer advantages but in reality strangles innovation, stifles growth and deepens a sclerotic inefficiency that costs jobs. My old example was hairdressers; here a hairdresser must serve a three-year aprenticeship before she can pick up the scissors, whilst in the UK a 16 year old straight from school can hang her shingle without hindrance and get creative with hair. The result is that most women here look like their hair is styled by a Soviet camp tonsorist from a 1950s gulag, whilst Brit girls pioneer the world's most fashionable and glam hairstyles.

Over the Easter weekend I recalled another. I've known about this for three years but for some reason haven't written of it; it is the network of 'business only' suppliers here. It's the way in which buyers in these nations are forced to engage professional tradespersons by restricting or preventing other means of carrying out the work. Many firms simply won't deal with you unless you have a business registration number. There is no equivalent to UK Builders' Merchants for example - just the DIY stores or the 'profi' wholesalers. One can't buy glass at €8/m2 in stock pieces to cut yourself but must order each pane in a finished size at €35/m2 from a glass retailer. You can't have a palette of bags of mortar delivered next day or buy rolls of building membrane except at consumer prices.

There are ways round it for some things - Germans are slightly less constipated than Austrians, and consequently it's been cheaper, including transport cost, to order bulk plasterboard and insulation from Northern Germany than from the local stockists of the same-brand material down the road. It's always worth searching .pl and .si sites as both Poland and Slovenia sometimes carry German and Austrian made materials at a substantial discount.

The most absurd result of local protectionism is Travertine. I'm tiling the new bathrooms in Travertine stone tiles, quarried and cut in Italy, just to the south. You'd think they'd be cheap, then; wrong. You can't buy them for under €65/m2 anywhere here - but I can buy the same tiles from the UK for €22/m2. The transport costs were exactly the same. Now explain to me how it's cheaper to truck stone from Italy to the UK and back to Austria than direct to Austria?

Over the weekend I needed to order some German Häfele ironmongery for a project - you may know the name, we use it widely in the UK. No chance. Häfele only sell to the trade - and helpfully offer to put you in touch with a local profi to do the work for you. They even make their buyers sign a declaration to promise they won't resell the Häfele kit.

Well, you won't be surprised that all of these restrictive practices are unlawful in England - not illegal, but contrary to Common Law. Contracts in restraint of trade are unenforceable. My hinges are available here on the grey market for €24 a pair; I've ordered them openly from Birmingham, from a trade supplier, at £9 a pair and will have them within a week.

It's a small thing perhaps, but an irritating barrier to economic freedom. It's one of the reasons for the zero VAT threshold here - you're either a tradesman or you're not, with no room for the sub-threshold activity we have in the UK. But it will kill them - it's a system that can only work in the absence of the internet.
at 06:31 15 comments:

Readers may recall we don't have much time for Eco-hypocrisy and virtue signalling; back on 2017 we pointed out that Bloomberg's much acclaimed 'greenest ever' building actually cost around 250,000 tonnes of CO2 to build - a Carbon cost that will NEVER be repaid by energy-efficient plant over the building's entire life. It will be demolished as it stands - a vanity project, a rich man's virtue signalling, and a huge Carbon cost.

Well, another Eco-liar, it emerges is Attenborough. many viewers will have seen his heartbreaking footage of an Orang Utan attacking the backhoe that had destroyed its home. As the Daily Remain writes, these forests are cleared and replanted with Palm Oil plantations to satisfy the European market for 'clean' 'sustainable' and 'environmentally friendly' biofuels. He didn't tell you that, did he?