It's not the crime that gets 'em, they say, but the cover-up. In an excoriating judgement, the High Court has found in the Vote Leave expenses case that


For the reasons given, we conclude that the Electoral Commission has misinterpreted the definition of “referendum expenses” in section 111(2) of PPERA. The source of its error is a mistaken assumption that an individual or body which makes a donation to a permitted participant cannot thereby incur referendum expenses. As a result of this error, the Electoral Commission has interpreted the definition in a way that is inconsistent with both the language and the purpose of the legislation

The case was brought by 'Remain' on the grounds that the Electoral Commission had given the Leave campaign duff advice based on an inadequate understanding of the law of which they could also have taken advantage had they been given the same duff advice. You will recall that as a consequence of the Commission's misleading Leave and its general incompetence, it crowed like a cock when it itself judged Leave guilty of breaching the regulations and imposed a fine to equal that levied on the LibDems for their breaches.

Reading the court's judgement one finds a litany of arse-covering, post hoc rationalisation, weasel reasoning and straw-clutching on the part of the Commission.


"...The position of the Electoral Commission on this central issue was somewhat elusive. In its summary and detailed grounds of resistance to the claim, the Commission denied that Vote Leave had incurred expenses by making the AIQ Payments but refrained from identifying any criterion which, if met, would signify that these were “expenses incurred” by Vote Leave. The Commission submitted that making a payment is not the same as incurring an expense and that making a donation is not the same as incurring an expense. But counsel for the Commission did not at that stage offer any positive explanation of what does constitute “incurring an expense” within the meaning of the legislation....

The Electoral Commission has advanced an argument that, even if (contrary to its primary position) the payments in issue in this case were expenses incurred by Vote Leave, they were not incurred “in respect of” advertising but only in respect of making donations to Mr Grimes....

It is not easy to see how, on the Commission’s case in these proceedings, its own guidance can be correct....

Ultimately, the position of the Electoral Commission on what amounts to an “expense incurred” within the meaning of section 111 of PPERA appeared to offer little improvement on the well known elephant test of “I know one when I see one”. That is not a satisfactory approach in circumstances where a person who reports referendum expenses incorrectly is potentially guilty of a criminal offence.

When asked to address these scenarios during oral argument, the initial response of Mr Gordon QC on behalf of the Electoral Commission was to decline to do so on the ground that he did not want to comment on hypothetical examples. That response was unconstructive, as the use of hypothetical examples is a standard method for testing the logic of a legal argument...

It is difficult to resist the conclusion that in seeking to draw this distinction the Electoral Commission was, in Aristotle’s phrase, “maintaining a thesis at all costs” ...

It is as clear as possible a condemnation of both the Commission's failings during the campaign  and its actions subsequently against Vote Leave, which have raised widespread accusations of anti-Leave spite, bias and partiality.

However, rather than bearing this humiliation in silence with bowed head, the Commission sought to justify its condemnation by the court with a PR offensive - 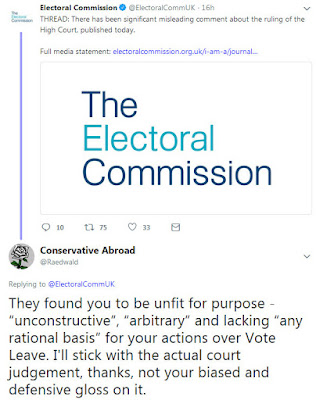 A democracy needs an authoritative and trusted arbiter of the probity of democratic actions, an unbiased and expert authority vested with moral and legal trust and confidence. Simply, the present Electoral Commission has failed those criteria on every point. It is, as the court found, not fit for purpose as currently constituted and must be reformed. That means both the professional officers, and the appointed Commissioners - who fail utterly to represent the electorate as a whole. 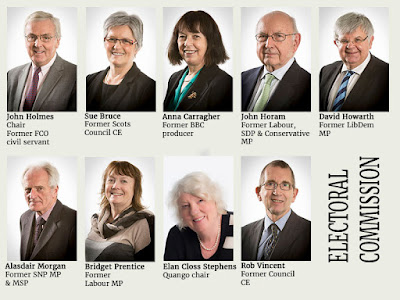 Yesterday's no-deal Brexit warnings, which set out that UK drivers would in future need either one or two International Driving Permits, at up to £5.50 per year, to drive in the EU, also proved in spades our nation's innate Liberalism.

We could of course have answered the EU's illiberal and authoritarian spitefulness like for like - requiring EU drivers to be equally inconvenienced when visiting the UK. But on balance I far prefer our superior moral position, proving our natural Liberalism and our position as Europe's most civilised and tolerant nation. Official advice is that:

Don't grouse. On such a trivial matter, it's really far, far better to use the opportunity to demonstrate our moral superiority and the EU's puerile and petulant spite. Martin Selmayr may hide in his Brussels bunker dreaming up nasty little 'punishments' for Britain, but we're really far bigger than that and won't do the same in return.
at 07:07 9 comments:

The Electoral Quotient - a big issue with a boring name

The faux outrage of Labour, Welsh or Scots MPs at the publication of the Boundary Commission's final report is theatrical, at least in part. Conformity of constituency boundaries with a uniform number of voters in each - the EQ, or Electoral Quotient - has long been outside developed nation standards. An EQ of +/-5% is just about acceptable, but advanced democracies such as New Zealand achieve +/-3%. For years we have been way outside even the farthest limits, with the vote of an elector in one constituency being worth the votes of two voters in another. Any complaint at correcting this anomaly is an anti-democratic whinge. The threat to democracy is not from having a fair and robust democratic system but in gerrymandering voters equality to pander to the self interest of MPs who don't want to lose their jobs.

Let's be clear. MPs are expendable; lose one, and there's a thousand more individuals neither less nor more capable ready to take their place. As individuals they are unremarkable and replaceable. It is the form and function of the parliament, the way the Commons works that is important. As Churchill noted, the confrontational layout of the chamber is vital, two sword lengths apart, as is the small size. Churchill opined that a chamber that never had seats sufficient to sit all members at once was an advantage -


... a conversational style of speaking, which has long been held to be the model of English Parliamentary life. How much better this is than foreign assemblies, where they all sit in a semi‐circle, and everyone has a place, or even a desk, which he can bang when he is displeased, and where every speaker goes up to harangue an audience scattered through a large arena. The essential of keen debate is the sense of a crowd, clustering together, craning forward, gathering round the speaker, with the cheers flung back from side to side.

The total number of MPs is also fairly critical. Proposals to reduce the number of seats from 650 to 600 featured in both the 2015 and 2017 Conservative manifestos. The essential elements of the Parliament would be preserved, and representation would not be diminished beyond comparative standards of democracy in the advanced nations.

Two matters however must be addressed. One is the social worker role that has fallen to MPs, who now spend much time intervening in social welfare and immigration disputes between their constituents and the State. This is not a beneficial or useful use of their time and attention, which should be devoted to the business of the legislature. Secondly is the sheer number of government posts, including the scores of junior appointments that bind an ever increasing number of MPs to the government, hobbling the scrutinising function of the House.

Correcting the EQ is the last of the measures taken by Conservative governments since 2010 to correct the drift of our democratic systems under Labour into crookedness and democratic corruption. We will all be better off for it.
at 07:03 11 comments:

Taxing and regulating the global corporates

I am wholly and utterly committed to low tax and efficient regulation. However, tax and regulation must above all be fair and equitable - that means low tax and light regulation for all. Our complex system has increasingly delivered a system that burdens SMEs, and firms with no significant exports, and favours global corporates. The cost of compliance with EU regulation is a case in point; a multinational can afford an entire department churning out environmental, risk management, human relations and equal opportunities policies, method statements, sustainability assessments and reports on complex systems of internal monitoring. A maker of hand-built sports cars operating out of three small industrial sheds in Suffolk, with one girl on reception and another in the back office, can't hope to churn out the same box files of redundant officiousness.

Likewise tax. A firm with a plant, a site, skilled workers, resources and substantial investment in the UK will always be at a disadvantage to the tax gypsies - the global corporates - who can pitch up in their generic Richard Rogers corporate HQ, install temporary staff and a few lawyers, and stay just as long as they're not bothered. The EU's senior unelected official was thrown out of office in Luxembourg (a small European nation about the size of Seattle) for encouraging corrupt tax avoidance that allows global corporates to harvest rich profits from one EU nation but pay minimal tax in another. And the scam isn't confined to the EU.

The advantages enjoyed by the global corporates mean they are crowding out national competition, enjoying supernormal profits and creating global oligopolies. The rest of us, meanwhile, pay taxes to build the transport and communication networks, the courts and legal systems, the schools and universities that they use for free without responsibility or care.

It may be legal, but it's wrong. And most folk can't console themselves that their pension funds are investing in these rootless and amoral firms and enjoying the profits - and those that can, may care to calculate that the potholed roads, the city centres lost to armed gangs and a generation that can't afford to buy their own homes just aren't worth the return.
at 06:48 23 comments:

Howard Jacobson in the Jewish Chronicle eviscerates Corbyn. Worth a New Year dram or two and a toast to our Judaic citizens.


"We know what an antisemite look like. He wears jackboots, a Swastika arm-band, and shouts Juden Raus; Jeremy Corbyn wears a British Home Stores vest under his shirt and is softly spoken.  Antisemites accuse Jews of killing Jesus; Corbyn is an atheist and seems not to mind if we did or didn't. Whether that's because Jesus was Jewish and killing him meant one less Jew in the world, is not for me to say.  And - and - he doesn't deny the Holocaust..."