Planning for the impact of AI

If you searched the manifestos of the parties in the election just gone for their AI policies, you will have been disappointed. Apart from Brexit, the news issues were little different from those in 1997 or even in 1979. But AI was there - as a trap for the unwary.

John McDonnell stepped on a mine when his September conference pledge to reduce the working week to 4 days came back to haunt him; I suspect this started as an option for dealing with the effects of AI in some sectors as an alternative to redundancy for 20% of the workforce, but of course it became a source of ridicule. Combined with a pledge to increase public sector pay by 5% immediately, social media filled with memes from delighted NHS workers, train drivers, prison officers and judges at the largesse of the Messiah. Labour tried to counter by saying the 4-day week would not apply to the NHS, only to immediately create hostility amongst half a million Labour voters. Then they did the sensible thing and disowned it, pointing out that it was not a manifesto pledge.

McDonnell is of course a fool. He assumed that the UK would naturally capture the benefits of the changes brought by AI as well as the costs in lost jobs and GDP. Additional wealth and profitability, in McDonnell's imagination, could afford to pay the same wage bill for 20% fewer hours. This is not a safe assumption. Globalism may ensure that the 1% do well out of such changes, but it's also meant that economic benefits have not been wider, and have actually disadvantaged many of the traditional Labour voting areas that wisely chose not to trust McDonnell's economic illiteracy. The risk now is that the benefits of the AI revolution will go to the same nations that have benefited so greatly from Globalism - China, India, Brazil. Managing AI changes must be at the very forefront of our national strategy, and Brexit will ensure that we, as a nation, are agile enough to develop a policy free of the drogue of a sclerotic EU riddled with the self-interests of 27 players.

If the PM is to keep his pledge to all those ex-labour voters, we must drive AI with a determination.

Hence, for those of you who read the full-fat version of this blog with its sidebar, you will have seen a new blog entry from Dominic Cummings pop up yesterday evening in the blogroll. It's all over the papers this morning in a way that a government job advert from a sad HR department would never be - and hasn't cost taxpayers a single penny for half-page display ads in the Guardian or whatever. It demonstrates beyond doubt that despite the almost universal absence of AI from the election manifestos, it's right at the top of the government's agenda. And that is very reassuring indeed.
at 06:04 11 comments:

The Telegraph reports on a planned reform of the higher levels of the civil service. We don't know what working relationship has developed between the PM, Dominic Cummings and Mark Sedwill over the past four months or so, but the fact that he still retains the triple crown of National Security Adviser, Head of the Civil Service and Cabinet Secretary clearly indicates that there is some sort of accommodation. Sedwill's role will be crucial in determining whether civil service reform is just changing the curtains or whether it will materially alter a service that was developed to meet the needs of the first industrial revolution, codified in 1870 by the Northcote-Trevelyan reforms, and has remained essentially the same since.

The story attributes to Dominic Cummings that


He has already made it clear in private that he will no longer stand for a culture in which it is seen as acceptable for senior officials to go on holiday the day before the announcement of a policy they have been working on for six months.

Well, I have some considerable experience of that behaviour. They also go on leave (they won't call it holiday) immediately prior to any important decision being taken, any project key date or any critical deadline. Dubai is one of their favourite destinations - just far enough away to prevent vexatious recall, but just cheap enough to not raise questions about their wealth. In fact I'd be astonished if they haven't already developed some sort of civil service club there. It is quite deliberate, and they think it's quite clever. As soon as they know a key date in the project cycle, they book their tickets and get their leave signed-off.

My own attitude to civil service reform is neither vindictive nor self-defeating. I have a cousin who cannot control his dog; he holds a senior post, is a qualified lawyer, a good husband and decent father but the dog is in charge, to the extent that it has had to be fitted with a muzzle. It can never be let off the lead and is unsocialised with anyone outside the family. I see the civil service as like a dominant dog - capable of great affection, with the potential of great loyalty and selfless service and duty, but which will be fulfilled only when it recognises that it is not the master, but the dog. For dogs, it is only having a master that brings true happiness.

A final roll of schadenfreude for 2019

If I have a new year resolution it is to heed the PM's plea to put the bitter Leave / Remain divides behind us and to consign the word Brexit to history. In one month we will leave the EU, and that act will kick-start the healing and reconciliation. However, for now, for this last day of the troublesome teens, let's look back with schadenfreude -

Tony Blair
A man who did his utmost to frustrate Brexit, making visits to the UK's EU adversaries and encouraging them to block and frustrate his own nation's diplomatic efforts. Fortunately, so hated is Blair by all sides of the political spectrum, the Remain side ignored all his pleas to deny Boris an election.

Andrew Adonis & AC Grayling
Both were early victims of Brexit Derangement Syndrome, each starting the Brexit process with an intact and valuable public reputation but ending the decade with their lifetime's reputational achievements in ashes, as mocked and derided figures of ridicule whom absolutely no-one will take seriously in the future

John Bercow
Stripped of his power, the victims of bullying, long suffering Commons staff and all who were subject to his gross unpleasantness will be breathing a sigh of relief at Bercow's fall. While noting he really didn't have that great a height from which to tumble. Bercow is now reduced to Italian game shows and entertaining shoppers on the Clapham omnibus. Ld Lisvane, who suffered little Bercow's bullying as Clerk of the Commons until 2014, cannot be looking forward to the sanctimonious dwarf's seemingly inevitable elevation to the Lords.

Grieve, Gaulk, Soubry et al
Purged from the Party, humiliated at the ballot box, the miracle is that these narcissistic idiots imagined that people voted for them personally in the first place, rather than for the party for which they purported to stand. How anyone can so delude themselves as to the extent of a non-existent personal popularity defeats me - or perhaps they were willing to undergo this public humiliation, indeed expected it, for the sake of the higher pay-off due from the Commons to defeated MPs than that paid to resigning MPs?

The BBC
Though it has been long building, the BBC's support of every anti-Brexit position, almost in anticipation of the reversal of the 2016 vote, has now condemned it. Polls are now emerging, and will continue to appear, that demonstrate that the BBC has lost the public's trust. Criminalisation of non-payment of the BBC TV tax is now unsustainable, and we will see further major changes before the Charter is due for renewal in 2027.

The Dags - Mark Carney, Barack Obama, the CBI et al
Most dags are now engaged in pretending they never opposed Brexit or never supported Remain at all. Just like all the ordinary members of the NSDAP vanished in 1945, or members of the GDR Communist Party became invisible after 1989. The CBI in particular, having devoted four years fighting Brexit on behalf of the global corps, is now declaring it is 100% behind Boris and always has been.

You'll note I've included none of the capos in Brussels. That, if it comes, will be for this date next year.

In a spirit of non-sectarianism, I have ready both Jamesons and Black Bush, both Catholic and Protestant whisky, in addition to my now favourite Monkey Shoulder blended malt Scotch. I will raise a dram for us all - may we, and may the United Kingdom, have a magnificent 2020! 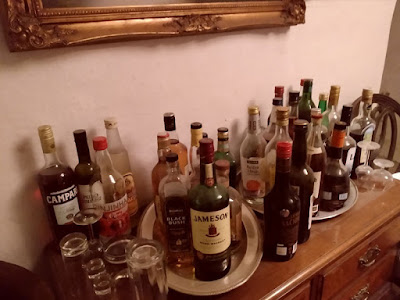 A somewhat boring post title for a subject that will become increasingly important. The centre is under pressure; after having hoarded power for a century, jealously guarding it and snapping-up any developing shoots of Localism, the central State and its bureaucrats cannot now hold it. The dam about to burst, not just in the UK but across Europe, is social care.

When IDS, the architect of the UC scheme, unveiled his proposals, I wrote that he was creating an unworkable behemoth. Far better to devolve welfare down to as local a level as possible, almost back to the principles of the first Elizabethan poor laws if necessary, to anchor both the costs (tax) and spend right down to the communities in which help is needed. This is anathema to a central State whose reason for being is to act as a substitute parent to citizens from whom it has taken our intermediate institutions. You've all read my excerpts from Robert Nisbet's writings on the subject and in 2020 I'll bring them back, along with de Tocqueville and others.

The first stage reaction of central States to the pressures has been to devolve just the rationing decision - saying in effect "Here's the cake. There's no more. Now you ration it out". The roles of local government and the NHS are being merged, children's social work is now merged with education. The government is carefully hypothecating increased NHS spend into hospitals and nurses knowing health service managers will still use whatever opportunities they have to divert clinical care money into social care services - care homes, home helps and home nursing of the elderly. The Telegraph carries a story this morning that is surely the tip of the iceberg, of NHS managers charging relatives £300 a day to 'assist' their care applications. The Express carries another - this time the EU devolving the rationing decision on food bank support.

IDS is a fine chap with the highest ideals and best intentions, but he was not the Dominic Cummings that welfare reform needs. With UC he has given us an unintentional monster that needs an unacceptable level of central State tax take to function adequately. It is unsustainable.

I believe it will only work when local communities are given the power to make 'time or tax' decisions themselves - whether to resource the needs of the elderly, sick and disabled in those communities by sharing the care duties or paying tax to employ others to do it, and to decide the balance, for there will always be one, between time and tax. That needs a Localism big bang the pressure for which will continue building during the roaring twenties. Hold on to your hats.
at 06:39 13 comments: