Will they or won't they?

It's now up to MPs. Either they swallow the Boris deal and we leave at the end of the month, or they vote it down and we're in unknown territory again. Personally I reckon Boris has played a blinder. Juncker would not have made clear his support for no further extension if he had not been reasonably certain that at least one of the 27 was so much on his wavelength as to veto the necessary unanimous decision of the council that would be necessary.

I won't rehash all the acres of newsprint on this. It's not a good treaty and it's not a treaty that will last for long, I suspect - but it gets us out and it starts the process. As a contributor keeps reminding me, after forty years Brexit is not an event but a process and if it takes ten years to unwind completely then so be it. But we must start somewhere and here is the best we can get.

I can offer only the same message as the Express this morning. 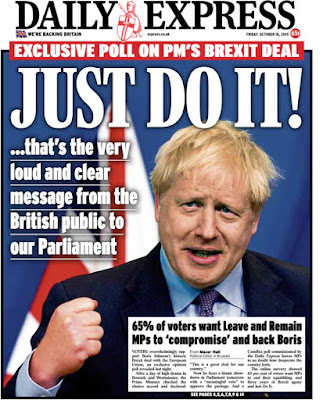 Catalonia, Kurdistan .. we either believe in self-determination or we don't

As our own struggle to free ourselves from the adhesive embrace of the anti-democratic nascent empire of the EU reaches its climax, I think we must spare a few thoughts from those elsewhere equally determined to assert their freedom and identity.

The right to self determination was first penned in modern times by Churchill and Roosevelt in August 1941, long before America entered the war and when Britain faced its darkest hours. The Atlantic Charter is a document of enormous hope and of confidence in the triumph of good and right over the dark and evil authoritarianism that had enveloped Europe;


..Third, they respect the right of all peoples to choose the form of government under which they will live; and they wish to see sovereign rights and self-government restored to those who have been forcibly deprived of them;

After the victorious alliance founded a permanent United Nations organisation, Article 1 of the New UN Charter signed in 1945 stated


To develop friendly relations among nations based on respect for the principle of equal rights and self-determination of peoples, and to take other appropriate measures to strengthen universal peace;

Of course what constitutes a 'people' is open to debate, but I believe that most of us will be able to recognise a genuine claim to a distinct identity and one that is contrived. Thus we can agree that Scotland, Wales and Ireland are distinct from England, but perhaps not that Wessex is so distinguished. The Kurds have a strong claim to self-determination, their people spread across largely artificial borders drawn after the Great War so that they are divided between Turkey, Syria and Iraq. The Catalans in the east of the neck of the Iberian peninsula have a claim at least equal to the basques in the west.

Self determination is an anathema to the global supremicists, who would abolish all national borders, all distinct national identities, to achieve a homogeneous mass of subjects of global government, global corporatism and global law and administration at the hands of a priestly caste of unelected experts. They dismiss self determination as 'nationalism' just as they dismiss democracy as 'populism'.

Well, I'm on the side of self determination. As a democrat and a localist you would expect no less of me. And the EU? They will side with those suppressing freedom, those imposing the authoritarian rule of conquest on their subject peoples. You would expect no more from them. If the Catalans imagine they will find support in Brussels, they are cruelly deceived.
at 05:50 27 comments:

Email ThisBlogThis!Share to TwitterShare to FacebookShare to Pinterest
Labels: self determination

Are we there yet? II

Yes, it's a question we've asked before. This time, no one seems to know. Everyone on our side is terrified that Boris will have given away too much, whilst the Remainers are praying that Boris won't concede enough to allow the EU to change May's Surrender Treaty, thus giving them scope for a second cancelling Referendum (which they will lose if it allows a single Leave option).

No one can get angry until the deal is published. We don't know what the deal proposes. Journalists know no more than I do - they stood outside the Berlaymont last night counting the lit windows and reporting the times at which the lights went out (most by 2.30, it seems).

So our barrels are charged with powder and shot, slow match is burning, and we are waiting. Ready to douse the match and fetch the shot-screw or otherwise.
at 06:38 20 comments:

Email ThisBlogThis!Share to TwitterShare to FacebookShare to Pinterest
Labels: ?, Brexit

The BBC's hubris will lead to nemesis

Channel Four news has broadcast footage of their reporters being scoffed at and refused interviews by both Boris and Arron Banks - the Arron footage is classic. They imagined that the public would be outraged that politicians had dared to defy the power of the news, but instead most folk just shrugged. Everyone knows that C4 News is deeply biased against both the Conservatives and Brexit - what do they expect?

When Boris went straight to Facebook to take public questions the BBC's Nick Robinson accused him of using methods common to dictators "down the ages". Up to a point, Nick - only those from the 20th century onwards, surely. Unless Tiberius had technology available to him we know nothing about. Robinson's jejune petulance and public silliness was because Boris had shown that ministers don't need the BBC.

The only reason a government minister gives a TV or radio interview is if their government / party gets more out of it than it costs them. There is no public right for angry Remainer journalists to harangue, insult, bully and demean their Brexit opponents in public just because they have control of the airwaves. There is certainly no obligation on anyone in public life to subject themselves to it.

The BBC's naked bias over Brexit has cost it the right to be a national broadcaster funded by the licence fee. The Charter must not be renewed in 2027 - and the sooner the lumbering behemoth adapts for life after the TV tax, the less the grief for all.
at 07:01 16 comments:

Brexit to the sound of trumpets

Well, HM has just broadcast our Party's draft election manifesto to the nation - and it didn't cost a farthing of our permitted election spend. I lost count at 24 Bills - it may be 26 - and every single one a feel-good, popular measure that reaches across traditional party allegiances and touches the parts of voters that other parties cannot reach. Labour, the Illiberal Anti-Democrats and the Scot Gnats will be furious - and I'll be listening to the debate in a couple of hours to laugh at the dribbling meltdown on the opposition benches.

That's the price of not enabling a general election - every single day they delay allows the government to use the entire machinery of Whitehall and the State to build voter support.  Their spittle-flecked fury this afternoon will go down like a lead balloon with the electorate - they will just be reinforcing Boris' narrative that the Remainers are unhinged, bigoted saboteurs with little self control and no potential whatsoever to fulfil the duties of HM's Loyal Opposition, let alone be seen as a government in waiting.