Voices against the lockdown

It's quite proper in a free and open society that anyone should be able to question not only the actions of government but to challenge the prevailing orthodoxy. And at times of radical government action - war, plague - questioning the rationale and objectives of particular courses of action must be expected, and is neither unpatriotic nor counter-constructive.

We must also expect a full spectrum of fanciful suggestions and conspiracy theories, misinformation, distortion, omission and misrepresentation of fact, and many, many innocent errors. And it's often the nature of things that false information spreads more easily than the reality. As Terry Pratchett used to say, a lie can go around the world before the truth has got its boots on.

Social media is censoring the most immediately harmful lunacies to protect the most gullible, the most credulous and the most intellectually vulnerable. But already in the US, following suggestions that Chloroquine may be effective in relieving symptoms, a man has died after drinking something from his garden shed that sounded fairly similar. And both here in Austria and in the UK the nonsense is doing the rounds that the virus can be safely washed into the stomach by drinking warm water.

At the other end of the spectrum, confusion over the numbers of excess fatalities due to the virus baffles even advanced minds. If the lockdown is successful, as it is suggested it is, the R0 of the SARS-Cov-2 virus will fall below 1. A figure of 0.6 was suggested yesterday as being possible. This means there will be few overall excess fatalities. If the government is right, there's not going to be a huge bulge in the mortality figures - evidence for the lethality of the virus will be scientific and clinical.

The other advanced argument against the lockdown was put most eloquently by Toby Young - the economic argument. In The Critic, he argued using QALY figures that spending £350bn to save a few hundred thousand elderly people was a gross distortion of policy. However, also interestingly in the same publication, his arguments were comprehensively rubbished by Sam Bowman;


Taking all this together, we can attempt a rough recalculation of whether the government shutdown is worth it, from a statistical perspective. If 230,000 lives are saved (the difference between mitigation and suppression in the Imperial model Young cites), with an average age of 79.5, that is around 2,070,000 life years saved. At the statistical life year value of £60,000, that is a total benefit in statistical terms of £124.2 billion, compared to less than £66 billion lost to the economy.

I do commend the latter piece. Sam Bowman is an economist who explains succinctly and simply why the government's policy is the right one.

Email ThisBlogThis!Share to TwitterShare to FacebookShare to Pinterest
Labels: Covid-19

Useless political puppets at the WHO and Public Health England

The problem with having a 'woke' UN is that it ensures the top jobs are not distributed according to ability but under a rationing system in which every country gets to have a top official, a system not unlike the EU's for appointing its unelected commissioners. So at a time of crisis we have, heading the WHO, Tedros Adhanom. Tedros has a PhD from Nottingham University and he is a Malaria researcher; not a distinguished achievement perhaps in the UK but enough in his native Ethiopia to make him Health Minister, and from there to the UN. His abject failure in his post, his inaction and lack of leadership and above all his subservience to the Chinese government have all been well documented, as has the 'Change' org petition calling for his dismissal, which now has 680,000 signatures. The way in which the WHO and the UN work must now either be overhauled to appoint internationally distinguished candidates or we must re-consider our membership.

At home, the failures of Public Health England are also being widely documented. Having missed the bus on testing, and exhibiting an attitude of dismissal towards more distinguished and qualified advice, they continue to offer a mediocre and lackadaisical response to the crisis. The organisation, under the management of Duncan Selbie, has hitherto concentrated on campaigns against tobacco and the evils of sugary drinks. Selbie, an unknown bureaucrat, earns more than the PM. He was due to answer some very pertinent questions from the Commons' Health & Social Care select committee on the 28th March, but reported he was exhibiting some of the early symptoms of C-19 and so was unable to attend. He is now self-isolating and working from home.

We deserve better than Selbie and Adhanom. This sort of woke stupidity costs lives and ruins others. I leave you with one chart - levels of TB, often multi drug resistant, in London that are actually higher than those in Ethiopia, Iraq and Afghanistan. Selbie has been in his job since 2013. This should have been his bloody priority, not his campaign to ban smoking in all hospital grounds. He has failed at every aspect of public health. The man must go. 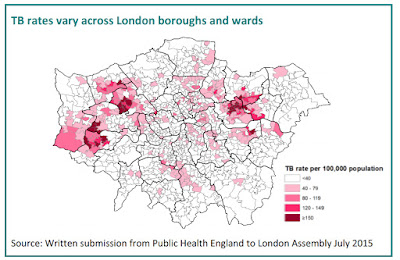 The world turned upside down

It is actually in the UK's interest to support M Macron and the southern EU states against Germany. Their efforts to force the Bundesbank to shit gold and ensure the future of the EU at least in the short term coincide with British interests. Oh sure, I dislike intensely all supranational bodies and the EU in particular and would love nothing more than to see its disintegration but as St Augustine prayed "..... not yet". The dual impacts of the Wuhan virus and Brexit shock means we need at least for a year or two a stable and functioning EU on our borders. We simply can't afford or accomplish the level of support we would be called upon to provide in the event of an imminent EU break-up.

We don't care if Germany loses her place in the world GDP league as a result of shared fiscal responsibility. In fact it suits us - Macron's plans would in effect castrate a powerful Germany on France's borders long before our Teuton cousins get any new ideas. It will all be money down the drain, of course, and the problem is the Germans know that. And if push comes to shove, I'd guess they'll put Germany before the EU. But we don't want a powerful independent Germany and a resurgent Deutsch mark. We really don't.

So many things will be turned on their heads during this crisis, supporting the French will not be the most extraordinary of them. The car lease market is approaching collapse, car dealerships are in crisis, car manufacturers close to bankruptcy. VW is burning through its €27bn cash reserve at the rate of €2bn a week. Some 13,000 passenger aircraft are now grounded, and after this crisis there may not be room for both Boeing and Airbus in the market without a massive state subsidy fight between the US and EU. The cruise ship industry is finished - our pensioners could just about take the 50/50 risk of Norovirus and spending the cruise voiding through the eye of a needle, but two weeks in a floating Wuhan disease incubator will be too much. Despite the Prozac-bright optimism of some in the markets - "Three months crisis, three months recovery then three months growth" - chirped one chap on the radio this morning - things will never go back to where they were in December 2019.

And as I predicted last Thursday, the public backlash against the police has already begun. I wrote "the longer and deeper the restrictions on our freedoms, the stronger and wider the public backlash, and the bigger the Big Bang demolition of the Central State to come". Well, we haven't even started yet.

Email ThisBlogThis!Share to TwitterShare to FacebookShare to Pinterest
Labels: change

What stops the young, fit and strong from stealing wealth and assets from the elderly, weak and infirm? Of course the very wealthy can afford to employ other young, fit and strong persons who will protect them just as long as their weekly wedge gives them more than killing their employer and taking their stuff. If you want to see just how this works in practice in a society devoid of law or justice, watch a few episodes of Narcos on Netflix. The drugs markets and the lawless societies in which the kingpins flourish are the true example of free markets - power, wealth, ruthlessness and inhumanity are the qualities favoured in this environment of accelerated evolution. A wholly free market would mean not only food and toilet paper but ICU beds, ventilators, vaccines and medical resources would accrue to the wealthiest or those with the biggest guns. So be careful what you wish for.

Research has shown consistently that when faced with great risk and great uncertainty, and with unknown outcomes, we humans will opt for a social safety-net model every time. We will vote for a minimum-provision-for-everyone model when none of us can be sure we will not require it ourselves. But we will also vote for the opportunity to better one's lot - whether that means keeping hens or retaining our existing store-cupboards and hoard of silver. And this model needs a functioning state that can exercise a greater power than any individuals, that can enforce law and justice and protect the weak and vulnerable. It doesn't have to be a big State, or an intrusive state, but it does have to be able to execute the collective will. Expressed through the secret ballot by universal suffrage and the right of free association.

Anyone here who really wants a wholly free market, take yourself off to Mexico or Colombia. Anyone here who really wants a socialist paradise, take yourself off to Venezuela. No? No takers? OK, so I guess we're just discussing where the floor should be in our social-democratic model, then, and the degree of freedom individuals can exercise under various condition of risk, threat and uncertainty.

That we're having to discuss such things for the first time in this new century is actually a good thing. That we've got the internet on which to do so makes this discussion different from the discussions we had in 1850 or 1917 or 1945. Excellent!
at 09:11 26 comments: