Sometimes one unintentionally hits a nerve. So it was this week when scrolling through my Twitter timeline I saw a map posted by a US academic I follow; just as a comment in response I put up another map. Here they are - 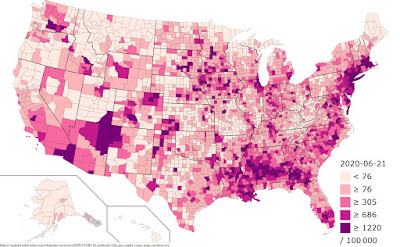 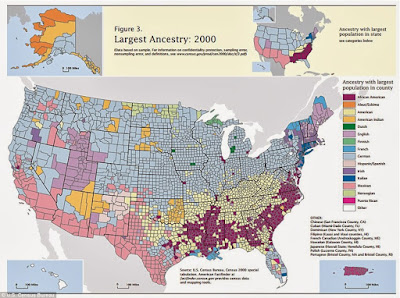 If I'd wanted to get a full flavour taste of the culture war in the US I couldn't have done better; over 50,000 impressions and a representative array of comments from the hostile (essentially the US Census Bureau was racist for making such a map) to the scientific and including a score from Americans who had little idea they were so German. Well, there may or may not be a correlation there, but the important thing is we're six months into this pandemic and we still don't fully understand it. So anything that might point to risk is relevant.

I'd like to see more maps. I'd like to see maps of poverty, overcrowding, extent of medical insurance, housing tenure and other potential factors. I'd like to know more about those lands and reservations in which native Americans have been so badly hit - their populations were devastated by coronaviruses caught from Europeans in the 18th and 19th centuries. You can never have too many maps.

And for the apparently huge cohort of Americans who have never seen a map of their own ancestry made by their own government before, well, glad to have been of assistance in improving your knowledge. Knowledge often leads to wisdom.
at 05:46 23 comments:

Email ThisBlogThis!Share to TwitterShare to FacebookShare to Pinterest
Labels: maps

The City reboots itself

The threat from Brussels was as crude as one from any third-rate mafia hoodlum - 'Give us all your fish or we'll destroy the City'. The more old-maidish amongst the commercial gents, probably the sort who would have advocated giving Mr Hitler exactly what he wanted, were quick to point out in their broadcasts and newspaper columns that fishing was a tiny fraction of the UK's GDP, a piddling insignificant part of the economy, and should certainly be surrendered to save the City. Indeed, if Catastrophe May had still been in power, she would have tried to do so. Fortunately for us this government is made of sterner stuff.

The City itself seems to have shrugged-off the threats, as Matthew Lynn wrote yesterday in the Telegraph. Indeed, his entire piece is so upbeat it's hard to pick a single snippet to quote; we're turning our backs on EU regulation and our faces out to the world, and the City is starting to feel the stirrings of that old buccaneering spirit again, after forty years under the sclerotic over-regulation of the unelected officials in Brussels. It's not a puff-piece though - there's a potential hard reality -


Step by step, the City, under the control of the Bank of England and the Treasury, is shaping its own regulatory system. True, there are risks in that. The City may lose access to European markets. That matters. British financial exports to the rest of Europe amount to £26.1bn, or 21pc of total UK services sold across the Continent, and that is far more than we import. And yet, despite that, it is still the right decision.

My own view is that right now, and for the immediate future, the EU simply won't be able to deliver on its Covid rescue package without the City. They will make whatever post-transition adjustments they need to secure continued access to the bits of the UK financial services nexus they need. But their ambitions are still to displace London with a hub of their own - Frankfurt, Paris or Amsterdam.

Of the three, Amsterdam is the only serious contender and although, handicapped by the EU as it is, it will never overtake the City, it will provide healthy competition and stimulate continuous innovation and improvement in London. They're like us; northern, with a liking for legal probity. Germany is too corrupt, the courts too partisan and biased, shareholder protection the worst in Europe, creditor safeguards too low and business is endemically bent. Frankfurt is a dreary little provincial town, Paris is too frivolous and France too bankrupt.

Standing up to bullies has more benefits than just exposing their weakness. It allows us to discover we still have a spine - and for the City, the scent of freedom is intoxicating.
at 05:07 21 comments:

Well, we didn't expect that to happen so quickly.

Let's just take a quick recap of the shifts in defence and security policy over the past few years. Reviews are now normally every five years; past reviews in 2010 and 2015 were typical dilettante Cameronian fudges; the future was supranational and international, UN good, NATO good, EU better. And we've ended up with a pair of carriers that were obsolete as soon as they rolled down the slipway, so vulnerable to a new generation of hypersonic missiles that they can't be let anywhere near a war zone. Possibly useful as a platform for fishing surveillance drones, though - anchored in the North Sea, bang in the middle of our EEZ, each housing a clutch of admirals. Unless we can persuade the EU Navy to buy one. Our Type 45's may be able to detect and shoot down a cricket ball travelling at the speed of sound, but that's not much use when the enemy are using missiles a lot faster than the speed of sound rather than fast cricket balls to sink our carriers.

Anyway, from 2017 Mark Sedwill was charged with conducting a run-up to the 2020 review, which needed to be broadened to include threats from State Actors. Tanks are out, deniable actions by unmarked troops are in. As Putin has shown in the Donbass, you can get away with it. And as the Salisbury poisonings and a score more GRU assassinations elsewhere have shown, even when they know it's you, what can they do, apart from ineffective sanctions and a handful of diplomatic expulsions? So long as Germany is dependent on Putin's gas, he has a get-out-of-jail-free card. China too has been a disruptor, using state cyber attacks on other nations' infrastructures as well as armies of hackers who infiltrate and disrupt social media. Iran's shipnapping in the gulf is open.

If Cameron was a dilettante, May was Queen of Chaos. She hadn't got a clue what she wanted, so long as she could keep it secret and keep the public, non-government experts and parliament away. Catastrophe May was a brainless ditherer, a dunderhead. On the basis that any plan was better than no plan, Sedwill acted in what he genuinely thought were the nation's best interests. He went to Washington to talk with those conducting Trump's review. He sent trusted civil servants to Brussels to tentatively commit the UK to EU defence plans. He invented the 'Fusion' strategy, allowing the UK to do everything at once with an Eton mess of defence, security, economic and other resources.

None of this made it through to what was scheduled to be the 2020 defence and security review. On taking office in 2019 Boris radically altered the terms of reference and downgraded Sedwill's role. Dominic Cummings had also long been a vocal critic of the UK's disastrous defence procurement regime. When Covid demonstrated that Whitehall's procurement systems couldn't even procure a few boxes of gowns and face masks, it was also an explicit admission that our mandarins couldn't be trusted with buying stuff like ships. Dom has written on his blog, bookmarked here, that utterly unfit Whitehall procurement "has continued to squander billions of pounds, enriching some of the worst corporate looters and corrupting public life via the revolving door of officials/lobbyists".

Champions for the MoD such as Michael Fallon and George Robertson have tried to not only hold the UK to our 2% of GDP commitment for defence but to increase this to 2.5% or even 3%. Defence interests - the admirals and generals - have done everything they can to ringfence 'their' 2% to tanks and ships and fast jets. Simply, their ideas are as redundant as the useless carriers we've just acquired.

The USMC has just junked all its tanks.

The decades to come will mean we must fight on the battlegrounds on which we are being attacked - green men, state assassins, cyber war. The ring-fencing that the men in medals want won't work. We need a mash-up of MoD, GCHQ, SIS and MI5, FCDO and the City. We need to throw into the pot the MoD's 2% of GDP, DfID's 0.7% and the billions of secret squirrel money. On the face of it, Sedwill's 'Fusion' idea was in the right direction - but the man had a 'reservation of mind' that meant interests other than the elected government's played a part in his delivery.

And Covid buggers everything. When GDP shrinks by 20%, 2% of that smaller pot will buy far fewer F35s or anti-cricket ball destroyers. Lord Frost will have exactly the right skill set, and will be able to put together exactly the right team to deal with that new reality. And my sincere hope is that Labour's front bench under Starmer can put a broad shoulder behind the UK's national defence and security strategy - after all, they may have to live with it from 2024.
at 05:30 17 comments: