I had a decent taste of Trad Labour in the People's Republic of South Yorkshire in the era of the miners' strike. The name was a joke, a pisstake of the Yorky Wolfie Smiths who postured and blustered and, like all empty pots, made much noise. The real heavy lifting was done by quieter Labour councillors and officers often drawn from the men that voters respected at work; pit deputies, mining and quarrying mechanical and electrical engineers, tutors at the local Tech, steel smelters, tool makers, railway engineers and the like. I liked those calm, confident men for whom nothing was impossible. They were committed to their class, to their county and to their country. They could coil a steel sheet as thick as your thigh, but it was the unexpected that fazed them. Emissaries from that there London came down to tell them not to say "Find us a cup of tea, will you, Pet" and similar things. They retreated into silence, and into the vacuum came Wimmin with green hair and Pronounced Views.

I've never met Frank Field, but I like him. Just as I liked Tam Dalyell, whom I did know. Tam chaired the all-party Parliamentary Archeology group at the time of the Iraq war, and we enjoyed a lively correspondence on the dangers of damage to unique sites in Iraq by both sides, and I've kept a score of his brief notes scrawled on Commons compliments slips with which he encouraged, fortified and thanked those with whom he worked.

It was no surprise that on the news of Mr Field's relinquishing the Labour whip yesterday, little Owen Jones proved his moral diminutiveness with a jejune, sulky, petulant Twitter post.

Well, I can guess the reaction of the Trad Labour lads I knew. They always had a very fine understanding of what was proper behaviour - and for a 76-year old MP who has represented his constituency since 1979, they'd know damn well that even his most bitter enemies in Parliament owed him gracious words. Field complained of Labour 'nastiness' and Jones has helpfully just proved his point.
at 06:27 24 comments:

By all accounts, the Met Police did well at last weekend's Notting Hill carnival. Knife arches, proactive and aggressive policing and lots of arrests meant not a single additional murder to add to London's score of 100-odd already this year. It came at a cost however; police officers have been complaining loudly at the roughness, shoving, elbows, rudeness, scuffles and minor sprains, strains and abrasions that they suffered. There was a fair bit of physical contact, and the officers didn't like it. Given the choice, and unless prodded from behind by their sergeants and commanders, many would go out of the way to avoid a tussle. Even with a certainty of a minor offender going free.

I'm afraid getting 'stuck in' has always been part of public order policing. Men and women officers need to be decent rugby players not shrinking petals - and thankfully, many are. But with ineffective, confused commanders such as Cressida Dick, the Met is carrying too much dead beat dead weight, officers avoiding conflict and carving out cushy jobs for themselves. Dick's judgement has been questioned on everything from overseeing the shooting of a Brazilian electrician, proudly claiming 900 officers are patrolling the internet for 'hurty words' to scanning the opinion columns of the Daily Telegraph for unprofessional use of words and publicly pronouncing on those pieces that have passed her scrutiny. Her intellect is neither universally admired nor trusted.

Below are two similar photos of officers being kicked whilst carrying out their duties; one at a student riot in Red Lion Square back in the 60s, the other from yesterday as officers attempted to arrest a man in a branch of McDonalds. 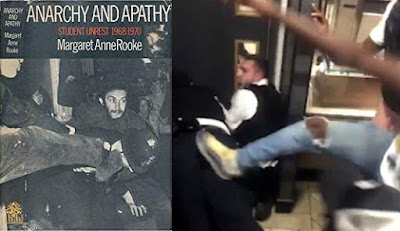 The first was published on the front page of virtually every daily newspaper and attracted a tsunami of public disgust and questions in Parliament. The second features deep inside the Daily Mail behind the Kardashians and has gone virtually unnoticed. What's happened to our righteous anger at assaults against the police - our police - who are supposed to be us in uniform? Or have their bosses been responsible for alienating them from public support? The struggle between a centralising Home Office and Localities for control and ownership of the police has been going since the 60s, and the Home Office is winning. They want a national police service wholly answerable to the Home Secretary, which would be a disaster for both democracy and public trust in the police.

We can't solve the local-central issue, but there is something that the government can do, quickly and I believe with cross-party support. One of the fears that police officers have is that if they react against public provocation, they will be at the mercy of some smart-arse lawyer such as the loathsome and now disbarred Phil Shiner scabbling damages from the taxpayer's purse and fat fees for themselves. And not only the police; soldiers, NHS staff, council bin men and just about anyone in the public sector is an entry-point for these reptiles into raiding our taxes to stuff their corrupt legal mouths with our gold. They advertise everywhere for 'victims' of the public sector. It's a scam and it's costing us billions - and only the skunk lawyers are getting rich.

Surely there's a simple solution. We must legislate rapidly to proscribe civil actions against public sector bodies from Conditional Fee Agreements ('no win no fee'). It was of course Blair who introduced this pernicious error in the Access to Justice Act 1999. Like much of what he did, it was wrong, and has created a disastrous legacy for our country. If you slip on a grape in Tesco and hurt your back, fine - CFA is a good way to go. If a copper sprained your finger whilst wrestling a Zombie knife from your hand, fund a civil action yourself. No legal aid. No CFA.
at 06:48 27 comments:

Email ThisBlogThis!Share to TwitterShare to FacebookShare to Pinterest
Labels: policing

Catholic church must now give control to the laity

It is simply dishonest of the Pope to pretend he didn't know about sexual abuse by Catholic clergy against children. Believe me, there is not a single Cardinal, not one Archbishop, nary a bishop and not a Monsignor who is not fully aware of the appalling evil these servants of God have inflicted upon the faithful.

Yes, I know because I attended an expensive Catholic boarding school run by brothers of the De La Salle order, and though personally subject only to feral violence from several and the vituperative hate of one of the bastards to whom I wouldn't heel (may you rot in Hell, Brother Alan), not all of my fellow pupils were so lucky. Sexual abuse of boys by the De La Salle brothers was widespread and well-known to a Catholic hierarchy that bought-off complainants, shifted abusers from school to school and used threats, violence and intimidation to keep us quiet. Men now in late middle age are only now facing the abuse of those times. One of my old school alumni has a quiet website where victims, some of whom believed for decades that they were alone, can find confirmation of the institutionalised abuse at the hands of the bastards.

Well, folk are resilient, and I guess most of us got over it. They didn't destroy my faith, or my Catholicism. I can say the words of the Nicene Creed in truth and belief. The abusers are now pathetic octogenarians or nonagenarians where they still live, no doubt dreading the fate of their souls. But please don't pretend the church wasn't fully aware of the abuse. Or that the fake sincerity of the Pope's 'regrets' can put an end to the matter.

Spiritual celibacy is a gift from God that comes naturally and rarely to a few. From shamans to gurus and other holy men, it occurs universally and when it does it is valued. It cannot be forced or induced. The Catholic church now faces a revolt from we, its owners. And we demand change. Clergy should be encouraged to marry. Women should be consecrated to the Priesthood. And more, we can no longer allow the church to be managed by the same people from whom the laity need protection. The management of the church organisation must be secularised.

In Austria and Germany, Catholics must by law pay a 1% income tax to the church. Failure to do so attracts criminal law penalties like any other tax evasion. It is the one Hitler law that both nations kept; Hitler confiscated the vast tracts of church land - agricultural, forestry and city centre real estate - for the State and in return granted the church the right to levy an income tax on the faithful.  It's what enabled the Bishop of Limburg to spend £26m on building a new palace for himself. So here in particular church members have a greater right than most to take over the governance of the church.

The current Pope is I believe a gift in time; few love him, and Francis is a Pope whom few Catholics respect overmuch or with whom few would regret clashing. It's the perfect moment to push reform. Bring it on.
at 07:14 13 comments:


Ukip has served its very valuable purpose. Its former leader, Nigel Farage, recently joined the Leave Means Leave campaign founded by Richard Tice, who co-founded Leave.EU with me. As a Tory-led organisation, it brings Nigel one step closer to home, and if we get a Brexiteer Tory leader, the right could be reunited. I’m sure he is in contact with leading Conservative figures, shaping things behind the scenes.