All Out! Boris to go on strike

As the early Autumn chill bites, an environmentally-friendly coke brazier at the entrance to Downing Street warms both the government pickets and the policemen on duty. Michael Gove leans his strike placard against the railings and warms his hands at the glowing coals. He is talking football with one of the policemen.

"Like a horse? Not sure I see that, Mr Gove"

"No no not the racehorse, the dan ....." they are assailed by a fug of heady gin vapours

"I demand to see the Prime Minister!" screeches Mother Soubry, for it is she

"You can't" snaps Gove at Mother Soubry "he's on strike."

"You will what?" snarls Gove "trigger a general election? Yes please! Why do you think he's on strike? All you have to do is vote him out and we go to the country!"

"Lose your seats? Be kicked out by voters? Be thrown on the scrapheap?"

Outside on Whitehall a furious squawking and a flurry of feathers indicated that the Leader of the Opposition was on his way to the House.

Mother Soubry sidles up to one of the policemen "Got any gin, love?" she asks plaintively
at 05:39 22 comments:

The British Road to Dirty War - a cogent warning

I am struck by the prescience of a considered piece by two British academics for the Bruges Group, which we featured when it first appeared back in mid-January, over eight months ago. 'The British Road to Dirty War' by Betz and Smith has been right on every count so far in detailing the process and the consequences of the establishment Remainers blocking the people's democratic choice to Brexit. I urge you to read it again in full. They say

The system works because everyone behaves by the rules. On either side of the bargain—the governed and the government—mutual obligations are observed in service of the common interest, which is the stable continuance of a non-tyrannical political order. Here we come to the disquieting part of the continuing Remain campaign, a campaign that seemingly supersedes party loyalty, not to mention national loyalty, which is its willingness to throw away the rulebook. Only a brazenly confidant, or foolishly out-of-touch, political class would chance this. The bet on the future is doubled.

The object of all these machinations has been to corral the British population into a Hobson's choice between Brexit-In-Name-Only and no-Brexit. It is no secret now. The plotters, finally, so close to the bell calling time on Britain's membership of the EU with a deal or without one, have declared it openly that they will not permit to occur what is the current legally mandated outcome of events. They will instead tie the government in knots, prevent its preparations for No Deal Brexit, and if necessary, crash it.

They think they can get away with it, the authors write, because they think we will lump it; that they can cancel the biggest democratic mandate in British history and we will all just shrug and get on with letting the corrupt and anti-democratic establishment continue to rule.


Those behind the plan to thwart Brexit by altering the standing orders of the House of Commons on the fly imagine this as a temporary alteration to the established mechanisms of power, which will return to normal after Brexit. That is to say, when the rules serve their ends, they are inviolably sacrosanct; but when they do not, they are perfectly mutable administrative procedures. 'This is not a wholesale reordering of the British constitution', averred one of the plan's prime movers. 'It would be a one-off surgical strike and afterwards things would go back to normal'. Such thinking reflects an astonishing degree of mental closure, an astonishing degree of hubristic contempt, or an astonishingly dangerous wager—anyway it is simply astonishing.

The two academics are amongst the nation's foremost experts in War Studies. They know of that whereof they write. Their final warning is chilling (my emphasis)


But we are expert on these matters. We have for decades studied why things fall apart, how a stable, essentially self-policing, productive society can turn into an ungovernable tumult roiling with rage. We know that this happens at first very slowly, a creep-creep-creeping to the limit; and then very fast indeed after the limit has been passed. We also know that no amount of free beer and pizza parties will swiftly return a society deranged by the shattering of the social contract by its own elite back to normality.

The Hattersleys of this world are deeply complacent. They are the new Bourbons who have learnt nothing and forgotten nothing. The threat of violence is not absent in the British polity. It is there, lying dormant. From time to time, it even makes an occasional appearance. A hollowed out and increasingly discredited set of political institutions is all it can take to set the flames alight. This is the British road to dirty war. The political classes are sowing the wind. They shall reap the whirlwind.

We must hope and pray that Speaker Bercow, the deep State actors behind the plot to thwart democracy, the credulous and gullible dags and fools of politicians and broadcasters who support them and the simple idiots who think it will work will all pull back from the brink.

If democracy is denied, and if Betz and Smith are right in their predictions, I weep for my nation.
at 05:31 52 comments:

The anti-democrats in parliament determined to block Brexit are fighting like trapped rats to try to cling onto power. It will do them no good. There is a hurricane coming - a storm of popular anger that will sweep them from their corrupt sinecures, flush them like recalcitrant turds, smash the barriers they have built against the peoples' will.

There is a Twitter meme doing the rounds; a capcha grid of the sort you must complete here to post a comment. The squares are filled with a view of the Commons chamber and the caption "Select all squares with a c**t". It pretty much sums up the mood of the nation.

Not only Corbyn's Labour are scared of the electorate. Up to a third or more of sitting MPs face being wiped out, swept away in the democratic storm at the hands of the Conservatives, Brexit or LibDems, and along with them any other MPs in Leave-voting constituencies that have betrayed their voters. This is the last we'll see of Yvette Cooper.

An election is inevitable and this time it will be People vs. Parliament.

For the first time since 1945, the people of Britain are remembering the power of universal suffrage and the secret ballot, and the anti-democratic rats are cowed in fear of their only nemesis - Democracy.

And they're OUT! The party b'long us!

It's now People vs. Parliament

Here is the full list of the EU's collaborators and Quislings who will now have the whip withdrawn and who will not stand as Conservative MPs at the forthcoming election; they've been purged from our Party - 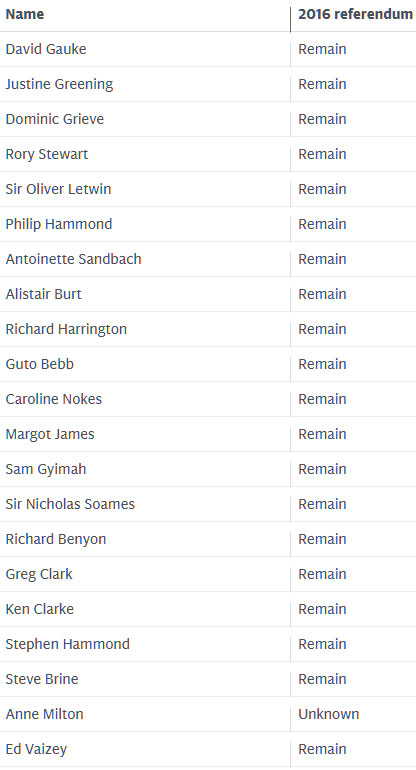 As I've written many times before, this crisis is about very much more than Brexit. Brexit is the proxy through which all those who oppose the patrician class, the political elites, the privileged metropolitan globalist winners and their corporatist backers are united. Yesterday the EU's most vocal Quislings were identified beyond doubt and expunged from the Conservative Party, which now heads the spearhead against the supranationalists. The Conservatives are now truly the parliamentary party of the people - and I am proud to be a member.

It really doesn't matter what Bill the Remoaner parliament passes today. It's an irrelevance. It can be revoked. Two things are certain - the United Kingdom WILL leave the EU, and there WILL be a general election.

If the Quisling parliament refuses the 2/3rd majority needed on a no-confidence motion by the FTPA, Boris can introduce a simple Bill to over-ride the FTPA provisions on this occasion; it will need just a simple majority. Loyal Tories may even be supported by Labour rebels and the SNP, who are predicted to increase their seats (below) from 35 to 50 if an election is held now.

The Elephant in the room

OK let's talk about the Brexit Party. This is Electoral Calculus' latest data run, from 31st August. It gives Boris a majority of 62. 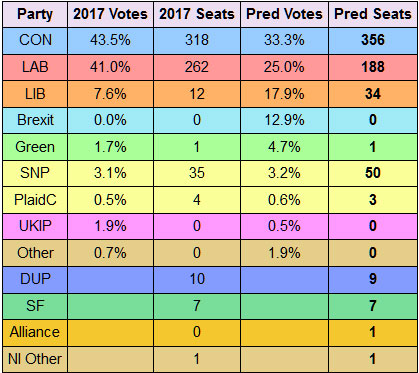 Things change fast. Just three weeks earlier, the plot was showing no overall majority for the Conservatives - and it goes without saying that in three weeks' time it could be different again. So my guess is that Boris will keep watching the polling and particularly Dominic Cummings' private research before making any final decision, ruling nothing in or anything out.

Post-May, Tory donors have been coming back. The Midlands Industrial Council, the most engaged and effective of the funder groups, already have a target list of marginal seats. You can be sure that unlike the incompetent May and her ex-Home Office mates, this election will be fought very slickly.

Boris will do what's necessary to gain a working power base. That includes clearing out the Tory rebels who will oppose him today. The one crystal clear, unequivocal, overwhelming desire of the country is NOT to extend the Brexit process any longer. If the Commons remoaners win their vote today, they will cement this as a People vs Parliament election - and the people, of course, will win.

It's time we lanced this boil. The country needs to - if not get back to normal - start getting back to work.
at 05:10 22 comments:

Is Theresa May facing deselection?

Tomorrow will be  a crunch day for Theresa May, as for a score of other Remainer Tory MPs.

It is expected that Conservative MPs will be subject to a three line whip to defend the government against Remainer attempts to sabotage Brexit. Mrs May has chosen to remain on the back benches in the Commons - and is now no different from any other Tory MP in having to comply with the whip. Boris has made it clear that voting against the government, or abstaining, means automatic deselection. Only death or serious injury is an excuse.

So it seems Mrs May has three choices tomorrow; obey the whip, literally throw herself in front of a (slow moving) bus or defy the whip and be turfed out of her Maidenhead seat in advance of the inevitable general election in a few weeks.

My bet is that she will vote for the government, that Rory Stewart won't, and will be booted out of Penrith, and of the others, some will and some won't. And I don't think there's a newspaper or columnist in the country who can call it better than that.
at 05:49 31 comments:

English teachers have a day out in Ipswich

Ipswich town centre saw its largest ever gathering of English and geography teachers on Saturday, as a score or more of pro-EU protesters descended on Cornhill to recite something together quietly and in perfect cadence. Though inaudible to those at the back, it is believed they were objecting to the actions of the government. They dispersed at 3.45 pm, and it is believed many headed for the nearby Bring-and-Buy sale in St Matthews.

It is also believed that similar gatherings of teachers were held elsewhere in the UK, but these have gone largely unreported by the national media.
at 05:56 16 comments: