Congrats to whichever Boris fans have found and distributed this meme - it's a decent photo, the suit fits, the hair is combed. He looks ... different. 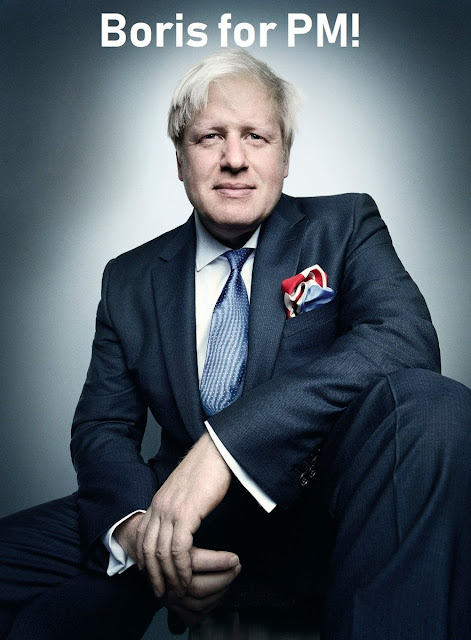 The vindictive spite of the PTSD Remainers

Many of you will know our fellow blogger Pete North, and whether you agree with him or not on Brexit I doubt there are many who would deny him a voice in the debate. Except of course those of the hysterical, vindictive and spiteful Remain side, who pay scant regard to democratic open debate or free speech. 'Howler' Grayling's legal serfs are pursuing Pete North for damages he certainly hasn't got - read the full story on his blog at  http://peterjnorth.blogspot.com/2018/08/ac-grayling-when-eccentricity-becomes.html

M'learned friends are welcome to scour this blog, but to save them the trouble, my own mentions of the carpet-chewer include the following;


...Barnier, and rude mechanicals and noises off as Andrew Adonis, AC Grayling and the other establishment PTSD casualties set up a louder than usual whine. Blair of course will be spreading his poison from Brussels today... 1.3.18

There is a concerted remainer media offensive this week; AC Grayling continues his painful public meltdown and so is deemed unfit to face the camera or microphones, but Andrew Adonis has already delivered a rather hysterical and disconnected plea on the 'Today' programme..4.1.18

At home PTSD Andrew Adonis and AC Grayling are ever closer to complete meltdown, Adonis throwing petulant tantrums at the BBC for no longer being 'binary' in its output; i.e. for no longer reporting that 'Remain' has an equal chance of winning. 9.4.18

... those of whom to be suspicious are the hysterics, carpet-chewers and effete womblies such as PTSD Adonis or 'Howler' Grayling who support the vile federasts ...23.6.18 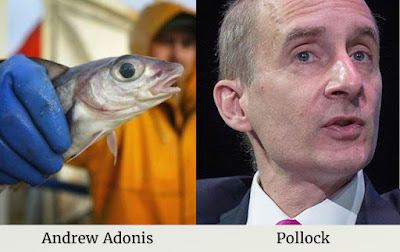 "British sovereign self-government must be restored"

"British sovereign self-government must be restored". So writes AEP in the Telegraph this morning (£). The gist of the piece is


1. The EU is essentially a lawless criminal cabal with an ethos of rule-breaking utterly antithetical to more honest, principled Brits; a sclerotic Empire focused solely on its own interests. There is no international law, no solemn contract, no bilateral treaty and no legal obligation that they will not breach, ignore, twist or pervert to their own ends, using their corrupt Freisler-court the ECJ to whitewash the crime scenes.

2. Theresa May is a wet hen without the nous to run a whelk stall. The 1922 committee should ditch her pronto and select a Leader willing to fight for Britain. Boris fits the bill.


'The cold reality for Brexiteers is that if they do not like Chequers [the Robbins Plan - Ed], they must mobilise and fight. Shanker Singham, a former WTO negotiator at the Institute of Economic Affairs, says nothing can be achieved as long as Britain clings to the EU’s regulatory structure and the perennial Acquis.  “We’re prevented from doing any deals until we have clearly taken the customs union and the single market off the table. Nobody wants to talk to us. The moment Chequers came out we ceased to be of any relevance to the US,” he said.

“We need a leader who is willing to get out of this halfway house, blast through the barriers, and play hardball with the EU. At that point the cohesion in Europe will break down,” he said.'

Well, Tory remainers have shown already how much they are spooked by Boris. The well-concerted efforts supported by May yesterday over his innocuous Burqa comments. And there could be no greater vote of confidence in Boris' ability than Dominic Grieves's promise to quit the party if Boris wins. I'd love to be a bluebottle on Anna Soubry's gin glass to catch her response.

And though Michael Gove will be back next month with his colon newly pressure-washed, his zits squeezed and forty new words in his vocabulary book, Boris has learnt his lesson and will keep the Govelet at arm-plus-dagger length. Particularly when his back is turned.

This is turning out to be a duck-August after all; the turbid waters beneath the surface of Tory tranquillity may well break, to our nation's benefit.
at 05:42 13 comments:

Boris Johnson is neither a Muslim-hating bigot, a Corbynst-type passive-aggressive racist nor, as the smaller and more hysterical of the Guardian's hacks would have it, a fascist. As the cartoon below says so clearly, our culture finds sinister those who hide their faces. Women who wear the Niqab or Burqa are seen as hostile, threatening, to be feared. Sadly, many Muslim women know this and use their silly costumes like cultural weapons - the reason they are now banned in so many European countries.

There you have it. Boris was just telling a simple truth. There will be those desperate for confirmation and endorsement of their own delusions who will seek to interpret his words as a condemnation of the whole of Islam - but rest easy, it isn't. 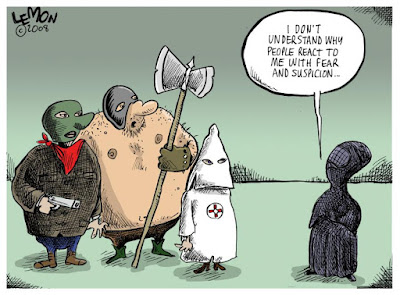 Logistics - if 3m are to march on London this Autumn

After having spent all my adult life quietly at my hearth, I marched in protest for a first and second time and not again since. Those protests were the two largest protests that London has ever seen - the Countryside Alliance march, and the Anti Blair Iraq march. The first was not about fox hunting, but a cry of anger against the central state nannying that treated resilient, self-sufficient Britons like children. The second was against a deaf and corrupt government launching the nation on an unlawful adventure that would leave Blair with the blood of a quarter of a million innocents on his hands.

With speculation now intense over a Brexit betrayal in the autumn, with an outcome even more egregious than the Robbins Plan that the mandarins have sent the Cabinet to sell across Europe this summer, it seems I may have to march for a third time. Michael Gove has in the past visited the Mayr clinic in Klagenfurt for the annual hosing-out of his rectum, but no reports have reached me this year that the Gove bowel-flushings have hit the Wörthersee kanal, so he may have been sent elsewhere in Europe to deposit his stale excreta.

A suspension of Article 50 or worse this autumn would have the potential to bring three million of us out on the street in protest. There is a feeling one has in one's bones, which I had twice in the past and now have again but in spades. A Brexit betrayal will give London, the remainer capital, the most massive street protest ever seen in this country.

It's possible but not probable that the government will seek to ban the march in advance as (a) too large and disruptive, even on a Saturday (b) for health and safety concerns (c) potential for violent conflict with remoaner zealots. But I don't think any government would actually dare to try to cork such anger. Realistically, the government will be planning even now to make such a march as difficult as possible, if not impossible. Central London Crossrail road closures will be arranged, Network Rail major engineering works planned, resurfacing of the M4 scheduled. The logistics of getting 3m people into London, marching us to Hyde Park and getting us home again are not inconsiderable. Transport. Routes. Water. Toilets. First Aid. Stewarding. Emergency Services. Sound stages and speeches. Local co-ordination.

However, I have great faith that the Leave side has so many thousands of years of accumulated senior management, HM armed forces and skilled professional expertise at its command that such an event can be planned and arranged for a Saturday in September, October or November if required. Perhaps readers could make tentative enquiries of local coach companies now.

I also have great faith that we can be peaceful. On the CA march, police were not even needed and the only time I saw the Stewards was as we processed up Whitehall, calling "Caps off, gentlemen please, as you pass the Cenotaph". Sure, the march will attract the race-hate morons who, like ill-disciplined dogs, will want to fight any folk with brown faces, but we can work with the police to isolate and contain them. Every far-right nutter in the land will also seek to hijack the event - but as I guess 2/3rds of the marchers will be ex-Labour supporters - from mining, engineering and steelworking towns and suchlike - this must be prevented from the start.

Brexit will cause these 20 things to happen

CHEESE
Only British made cheese will be allowed to be sold in the shops after Brexit. The government will publish recipes for baked Lymeswold, Dairylea Raclette and for drying Cheddar to grate for a pasta topping. American tinned and aerosol cheese will be expected to fill any supply gaps, and New Zealand Cheddar imports will increase by 500%
CONDOMS
After Brexit, condom size will no longer governed by Directive EU 15/8454. The UK will therefore be free to both manufacture and import condoms in the larger sizes that British men have long been keen to use. Old stocks of sub-sized EU-standard prophylactics can be send to Asia as grant-aid in lieu of money.
DOGS
French bulldogs, German shepherds, Rottweilers, Schnauzers, Pyrenean mountain dogs and other Euro breeds will have to be renamed
at 10:44 No comments: