Martin Schulz just another bent bastard after all

The man tipped to replace Merkel as 'leader of the free world' as the wimpering Guardian would have it, Martin Schulz, a man endowed by the leftie press with virtues of humility, sanctity, mission and aptitude, now turns out to be just another bent bastard politician after all, with his great sticky hands covered in corrupt Euros.

He's a socialist, so it should be no surprise that his aptitude was actually for diverting huge swathes of EU taxpayers' money to his chums. Yes, the man hounding UKIP and Marine Le Pen over mis-spending trivial sums of their EU Parliament party grouping money on campaigns is himself mired to his neck in shit from his chiselling corrupt peculation.

What he's been doing is breaking all the EU's rules to appoint his chums to lucrative and obscenely well paid EU jobs. And the leaks have come not from Merkel's campaign team but from the EU's own administrative staff, revealed in Der Spiegel.

Personally, I think there's something of a whiff of a palace coup about it all. Two of the EU's several Presidents are the targets. The drunkard Juncker, whom determined efforts are being made to defenestrate before his 2019 termination date, and Schulz, have proven to be unusually incompetent even by EU standards, and all the little Daniels dependent on the vast Brussels scam for their livings are not happy. 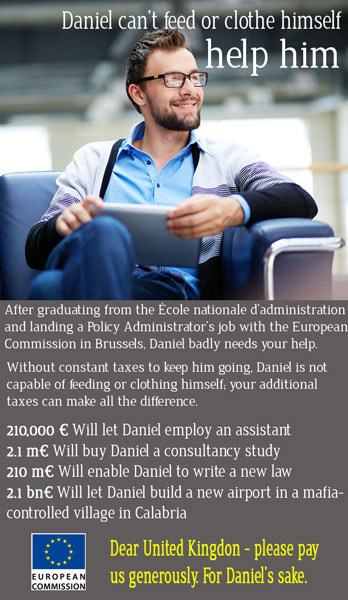 
How many Euros would it take to hang Daniel.

I still have some generosity left.

Well. well, well. Yet another socialist, EU troughing parasite is shown up to be, well, caught with snout in said trough. Who knew?


The momentum started by Trump seems to be spreading - people are now questioning, critically, the decisions and motives of MP's/MEP's of all colour and flavour.

The 'populist' upsurge is making people THINK and there will be people in positions of power keen to sacrifice some of their lower echelon in order to perpetuate their own survival that little bit longer.

Now we see the likes of Schultz for what he is and represents we can take pleasure in the knowledge that the faeces flinging outwards from the fan can only be landing on others deserving of the stench.

We need only be cautious of what these people may stoop to to either distract or deflect attention from themselves. Vigilance, people....

So! The search for an honest socialist continues!

I think we need to widen the search to try and find *any* honest EU official. Substantial bets could be placed on the outcome :)

What Dave_G said! With bells on.

'He's a socialist, so it should be no surprise that his aptitude was actually for diverting huge swathes of EU taxpayers' money to his chums.'

Such a useful bloke to quote:

“When plunder becomes a way of life for a group of men in a society, over the course of time they create for themselves a legal system that authorizes it and a moral code that glorifies it.” - Frédéric Bastiat

The EU is on borrowed time. As it moved away from its remit of providing a common economic area and ventured into the private, social and political areas of individual members, the writing was on the wall. Folk simply don't want another layer of government. A coup may be what is happening but ultimately this project is doomed and that in part is due to its links to globalization and the dehumanizing affects thereof. The gig is up.

And to think that the British havn't even had to dip into the bags of slime that GCHQ have gathered over the years yet.

These people's careers are self immolating and we havn't even got stuck into them yet.

Oddly, I can't find this news on the BBC website

To be honest, I have to pray for anyone who will inherit the mess left by that Dark Angel: Merky. But as 'leader of the free world' --- what and where is that? I know of no such place!

During my daily read at EUReferendum.com it never ceases to amaze me what a labyrinthine bureaucracy these people have been building for 50 years.
All the rules and regulations, all the thousands of bloody Daniels justifying their bloated sinecures to construct a full blown country in partial secrecy.
All the while our own Daniels pretend that it is just a trading block.

When it all falls apart there will be shit to pay!

So, earlier today, elsewhere, there was I and praising Mr. Delingpole but crikey Radders, just for this line, well, I'll go to Pudsey as they say ara'nd these 'ere parts!

Brilliant sir! just superb, a blade fitted deep between the ribs - in a manner literally:

Yes, the man hounding UKIP and Marine Le Pen over mis-spending trivial sums of their EU Parliament party grouping money on campaigns is himself mired to his neck in shit from his chiselling corrupt peculation.

The worst of it is that Martin Schulz and his ilk think themselves effectively invulnerable.

I was surprised by Schulz's imperiousness in articles and interviews - but they seem to inoculate particularly socialists with the conceited arrogant twat virus as we can see from our collection of superannuated ex-EU nabobs.

The German elections look like a run between Mutti Nerkel and this over inflated gasbag - that's not good. I wonder that the Germans might wake up a bit - but since the Green vote looks amazingly resilient - I'm not holding my breath. Merkel is crashing the gearbox for reverse but ... we'll see.

btw - do Commission functionaries like Daniel actually pay taxes? I heard they're "tax-free"...

Oh.. to see Mandelson, Kinnocks and Ashton etc. lose their EU pensions .... that would be a fine day.

Mildly O/T but this report seems to indicate that bending EU politicians is something that some are indulging in a grand scale.

Ha ha 'The drunkard Juncker' let's tidy that up and hence forth just refer to him as Drunker.
It's all just one huge barrel of stinking mortified rotten shite, the sooner we're gone from them the better, almost tempted to say at any price.
Are they trying to make themselves look bad so we'll be willing to pay the £60billion just to put distance between us, they're getting close.

Perhaps Merkel is trying to cling on to her position. Will she look shiny and white next to this ugly shyster? I wouldn't put it past any of them to play very dirty indeed.

If Schulz had been trying for the presidency of some of the other EU countries, France for example, he would likely have got away with it. One does wonder why he wants to move away from his presidency of the EU, surely more room for shenanigans and enriching himself there, to the presidency of Germany. Does he know something we don't - obviously yes.