Dreary and unimaginative Brussels Federasts are keeping true to form - and are repeating every one of the dirty tricks used on Greece and as described by Yanis Varaufakis. Do these tedious little Eurocrats really have nothing else in their toolbox?

The Telegraph carries a report that details the dirty dealings. First, the outrageous gangster demands and the bullying to agree them. Then a total refusal to provide fiscal and legal justification. Then threats to unilaterally suspend the talks unless the UK agrees to their demands. All to a background of propaganda fed to the Remoaner press that the UK 'isn't coping' - a meme that has gulled even the gifted.

The grubby Federasts even appear to use photo opportunities to try to wrong-foot the UK. However, we have many years of watching our national football team deal with this sort of tactical dirty play from johnny foreigner, and every football-watching Brit will see the sly shin-kicks, ball handling and shoulder-barging for what it is.

So, second session in and I remain hopeful. 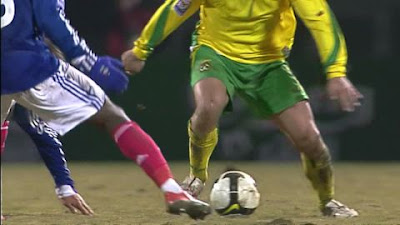 I hope our negotiators have the clear guidance in what is acceptable and what is not. They should also have the authority and full backing of DD and TM to make the call to walk out.

DD and TM should already have their speeches to the Nation written explaining that due to bad faith negotiating By the EU, their use of threats, bullying and intimidation the UK has reluctantly came to the inevitable conclusion that continuing negotiations under these circumstances is futile. Talks are indefinitely suspended pending the EU considering their position. The UK will not be bullied by anyone, as things stand we will be leaving the EU and implementing WTO rules due to the EUs intransigence.

As Barnier said, the clock is ticking.

We just have to talk-out the two-year negotiating period, which will be made even easier if the bullying EU insist on stalling the negotiations until and unless we roll over to their demands. Then it's straight onto WTO rules and the EU can explain the consequences to the German, French and other EU economies.

What Theresa May and David Davies cannot do is submit to the EU's demands: it would guarantee a Corbyn Government because the former UKIP votes that went to the Tories in June won't be lent again if they do.


We stand or fall at the whim of our negotiators - but who's to know what their motivation (or instructions from 'on high') really are?

It's almost impossible to determine who's genuine, who's been corrupted or who may be the 'snake in the grass' and it is only by the result - which will then be too late - that we get to figure it out.

Politics has become so RUINED that the only negotiators we could possibly trust would be our individual selves.

Sanctions and/or punishments (career or financial) should have been mandatory for all negotiators.

We, and I mean UK plc, really dodged a bullet voting to leave this 'club'. You can see where it's going for the rest of them, the Brussels mafia will consolidate their power over continental Europe and a future Napoleon will emerge to rule it all. Look at the way Macron is behaving, and Merkel - uber Globalists.

Why do people not see what's coming?

Steve, after decades of socialist destruction of our education system and the weaponising of ignorance, few have the ability to know or understand their manufactured irrelevance to the PTB.

I'm reading Yanis Varoufakis' book 'Adults in the Room'. Unbelievable how very corrupt and evil the EU is - frightening. I just hope our negotiators know what they are doing.

Raedwald, You clearly have a much sunnier disposition than I do. The problem is not only the acknowledged Remains who are eager to bow down to the EU onslaught, but the many people who style themselves Leaves who see abasement as the solution.

The only way we will get what we voted for, and continue to want, - independence and a trade deal - is to walk out. Threats won't hack it. We have to give notice and go. Compromise with the EU means we will be locked in for ever, because as I stated 5 or 6 years ago, the euro won't collapse, and neither will the EU. EU politicians see offers of compromise as a sign of weakness.

Yet the idea that the UK cannot survive and prosper without being in the single market, or without a supposed "interim" agreement (that in reality will never result in exit), is just ludicrous. What about the rest of the world not in the EU? Do we have the courage, and more importantly resolve to seek true independence as the USA did and as India did? On current evidence I would be forced to say no.

Commenters here seem to understand the EU more than I do, so may I ask a genuine question?
Why can't we just say, "Get stuffed, we're off. Why would we write a cheque for billions of pounds, why do we need your permission to negotiate trade deals with others?"
I hope someone can spare the time to educate this somewhat naive reader - thank you!

The EU is extremely complex. For example I have a copy of the Lisbon Treaty and it runs to 350 pages of small print.

The UK constitution allows our government to make treaties, and to remove ourselves from them too, using the well known UK constitutional principle that "No government binds its successor". However for the sake of good diplomatic relations with all countries around the world, the UK needs to leave the EU treaties in a sound, legal, and fair way.

The EU has failed to show any moral or legal requirement to pay them a one off "leaving fee". There is nothing in the EU treaties (TEU and TFEU, derived from the Lisbon Treaty) which states that such payment is necessary.

Whilst the UK remains in the EU, we do not have the right to sign trade deals with other nations. Out of the EU, including out of the EU's single market and customs union, that right is one of many which we regain.

So really it's to do with being regarded as reputable - a country that others would want to do business with. Thank you, Budgie