If nothing else is certain, it seems now that both sides in the Brexit negotiations recognise that December is the crunch month. The decisions made by both sides at the end of the year will determine whether we leave with a deal or without one; without one, we then have fifteen months in which to prepare for a life with no transitional trade period with the EU, but richer by £13bn a year. That saving can pay for, amongst many other things, at least twenty new Fisheries Patrol Vessels and their crews.

Like others I have a certain faith in brinkmanship, having seen it in action many times. As public negotiations seem deadlocked and intractable, and as midnight approaches, the quiet private talks that have been going on in the background suddenly produce a deal to which both sides can sign up. So I shall avoid any didacticism until things go past the point of no-return.

One point about what must be a paragraph-heading in the negotiations - a quid pro quo deal that involves the City, and the UK's exclusive economic marine zone. It has been suggested that in return for continuing to allow the City some advantage - passporting rights or somesuch - that we continue to permit EU fishing boats to harvest fish from UK waters. If we go out with no deal, and prevent EU vessels from fishing in our waters, they will have to pay (under WTO rules) a 30% tariff on any British-caught fish imported, as well as the idle-costs of many thousands of EU fishing boats and their crews who currently depend on UK waters for the greater part of their livelihood. The two issues may not be equal in financial terms, but excluding the EU from UK waters would hit the EU very hard where it hurts - popular perception.

On the menu for last night's EU dinner was aiglefin fumé - smoked Haddock with a Parmesan mousse on a bed of butternut gnocchi. They'd better make the most of it; without a deal, from 2019 they'll be eating remarkably little Haddock. 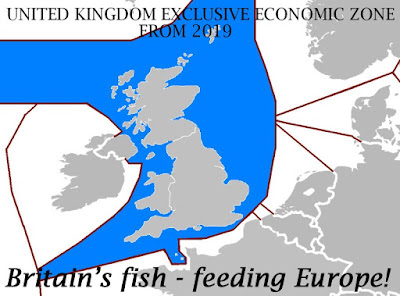 Looking at that map Raedwald, you can see where the Irish would be better off.... Unfortunately it is run by a bunch of people that forgot what they spent the last 800 years doing.

The celtic tiger has been brought to its knees for politics rather than its people and once again, people are its greatest export.

On our side, if we had a Parliament of patriots who actually represented the people and not Elite vested interests, we'd be leaving with No Deal. But we haven't and we have a Remainer PM who will put up with any humiliation and will bung them £tens of billions in order to get a deal.

On the EU's side, they need money. They've insulted and humiliated the Brits; they've had their fun; they've demonstrated to any other potential leavers the kind of treatment they'll get ..... but they need money, so they need a deal.

So Theresa will bung them some more money and in December they'll graciously announce that we have met their demands so can start discussing the trade deal which German Officials (natch) are drafting.

DD99, My sentiments exactly. Here's the follow on; when the UK is no longer throwing money away and trying to restrain federalism, the deepest pocket and the power will be from the Fatherland; who or what will restrain them? Are we handing the continent of the EU to German hegemony?

Brinksmanship is always a good friend in negotiations provided you understand who holds all or most of the aces; I think we have two each. For all the rubbish talk about queues of lorries in Dover, you don't have to be clever to imagine the queues of lorries with all sorts of goods clogging up the European ports. For all the talk of planes being grounded, they wouldn't just be grounded here in the UK, the European airports would be grounded also.

If our politicians and the EU politicians think that all of the above may well happen, then they will certainly be "sent home to think again" by all the massive industries that would be adversely affected. Some large blokes with hard political fists are about to grab hold of the politicians pallid, pasty heads and do some damage to them. Open door, put head in, SLAM. Repeat until sense is seen. There, that's brinksmanship for you!

The Celtic Tiger only existed due to EU largesse. It was always a paper tiger.

There's always carp, and in Austria you have plenty of pike too. Just watch out for the bones.


I noted with some glee that the typical scaremongering claims made by the Labour rep on QT last night was met with much derision and mockery.

As for the fishing grounds - I still reckon our 'loyal' representatives will give it away with the bathwater.

I note that Mr. Corbyn and the Remainers (if they are in fact different people) are doing all in their power to encourage EU greed, and hence to encourage the EU to hold out for a totally unacceptable deal- which would result in no deal and a clean break.
As to post Brexit EU, it will be overwhelmingly bankrolled by Germany, who's external trade will be 70% with non-EU countries. That is they'll be paying more to be in a customs union that excludes 70% of their customers.
Also there'll be less money around for subsidies, which might well make other states reconsider their positions.

Pat, Corbyn said in Brussels yesterday that an EU "No deal" (that would be a WTO deal, actually) is "very dangerous" for Britain. Yet we trade with the rest of the world using WTO rules - about 60% of our total exports. Why isn't Corbyn concerned about our other exports as well, if WTO trade with the EU is as "dangerous" as he imagines? Corbyn is Bliar mk2.

It was always about the money. Locked away in a safe somewhere (Merkel's office probably) sits a figure on a sheet of A4. A sum, provided by accountants, sufficient to sustain the project for at least 5 years - or such time as it takes to introduce a special tax to cover the loss of the UK's contribution.

These slags need money, lots and lots of money.

To give you an idea a bad deal for them would be £50 billion. That's their bottom figure. May has already moved from £20 billion (Florence) to £40 billion today. We're approaching their bottom figure, so a few sticks are being replaced with carrots (they've agreed to talk about a trade deal but only amongst themselves).

Talking to Sky's Adam Boulton this morning in Brussels Nigel Farage was clear: we return all EU pension liabilities (circa 22,000 UK nationals) to the UK and pay up to the end of the 7 year budget cycle (2020). That's it.

If as you say December is the crunch month (and I do not disagree) then the rest of your argument falls flat. Taking the fisheries argument first-How will yUK enforce any unilateral declaration of its economic zone? You will need more than twenty patrol vessels, where will these come from? Have the specifications for such vessels been drafted? Are crews available? Which shipyards are available, and how in heck do you build, crew and train before January 1? Impossible, so EU fishing boats will continue fishing anywhere they choose with impunity.

Avoiding the narrow subject of fish, how will yUK feed itself? Presently you import fifty percent of your food requirements, much of it from EU sources, a fish embargo (even if that were possible) would probably precipitate a foodstuff embargo from EU, certainly those foods could be sourced elsewhere in the world, but are you ready to do so? Nope.

How about electricity, yUK is extremely deficient in generating sources and requires major importation during the winter? Is your government willing to let you freeze in the dark? I believe the answer is yes.

While I support Brexit, the intolerable dilly-dallying of the Maybe government is playing right into the hands of the EU (purposely I believe). So like it or not, initially it will be soft Brexit, pay up, be governed by ECJ, kick the can down the road, muddle on, enjoy the decline, eventually because it demands too much hard work of the politicians the whole idea will be abandoned.

Cascadian I have to agree, much though I wish it were otherwise. Shades of my Elizabeth to Elizabeth - the rise and fall of an empire theme.

You can tell what's coming unless we get our collective finger out: out of the EU in name only (May); pay and obey for years (May's fault); nuclear deterrent scrapped (Corbyn); Scotland independent (it is already in all but name); Falklands given to Argentina (Corbyn); Gibraltar to Spain (Corbyn); N.I. to Eire (Corbyn solves the border problem!); run on the pound and stocks when Corbyn gets in; capital controls (Corbyn); consequent impoverishment (Corbyn); begging to rejoin the EU as full members and accept the Euro.

It's all so obvious.

The EU has no conscience pillaging Indian Ocean waters. Spanish boats fish far north and the Somalia pirates started after their catches plummeted. A Spanish fish counter is huge, dwarfing those in UK supermarkets. I despair for the world's oceans after Asian and EU industrial mining of a resource so precious.

How would we buy food outside the EU? By buying the cheapest worldwide and not taxing those who buy it- i.e. no import duty on food from anywhere. And whilst we're at it abolish all import duties, why should we penalize Britons for buying the best value for money goods available.

Don't you know that's not permitted in Brexit discussions?

What are the odds of May being replaced by late December?