Just a swift PS to the post below; it turns out that the whole infrastructure of smart gas and electric meters (new generation of which will use a common comms hub in each house that works with all power and gas suppliers plus 'enabled' appliances ..) is being rolled out by DCC Ltd, a wholly owned subsidiary of Crapita plc, now reportedly approaching a Carillion crisis. Hey ho. 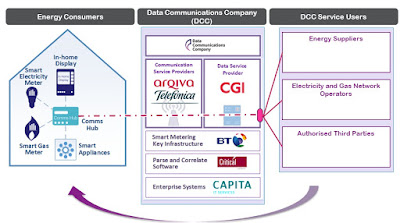 There are two WAN options - one for South and Central UK and one for the North, based on radio transmission. And the documentation is interesting, confirming exactly the configuration of metallic shielding / faraday cage that will block the meters (well done, Steve) for anyone interested.

And from a skim through the technical docs, they're building in a lot of room for expanded functionality for those 'Comms hubs' - including an option for TCP/IP via packets carried on the hard power lines themselves, making wireless / radio HANs and WANs redundant.
at 11:08

"Authorised third parties"!! Authorised by who? Yet more intrusion into our lives...

"Including an option for TCP/IP via packets carried on the hard power lines themselves" Obviously a way round our efforts to thwart these devices by Faraday cages, and a final death knell for traditional AM broadcasting...

All of this skullduggery just so that they can switch us off?

Fekkers, if they devoted just a little 'energy' into ensuring plentiful and cheap supply................for a mere fraction of the sums presently involved to force Britain to go green, one cannot help but arrive at the conclusion - that all of this is so patently fuck all to do with "saving the polar bears".

As John Archer used to say, some one give me a reason why we shouldn't rise up and kill 'em all?

After all, they are intent on killing all of us aren't they?

Rapscallion, That's the way it is. They think they'll get away with it until the point where they take it too far, and they don't. I remember the shock on their faces when we voted Leave. In the end democracy is only the peaceful version of civil war. So if they ignore democracy . . . . .

In the end, you’ll have to have a smart meter, because they’ll stop making or re-furbishing the old ones. My son’s gas meter sprang a leak last year and the gasman had to fit a refurbished meter.

Dave Ward is right, ‘authorised by whom?’, and the next question is obviously ‘for what?’

‘Kantar, home to the world’s leading research, data and insight companies, was keen to explore a fresh approach to identifying consumer patterns in the home.
This initiated a ground breaking collaboration with ONZO, which involved analysing household energy data from smart meters in participant homes.
The outcome of this project was significant; not only were the results an accurate reflection of the participants’ activities in the home, it also demonstrated how energy data analysis could be applied to provide transformational insights around consumer behaviour.’

So are you going to be a willing or unknowing ‘participant’…?


There's software available that spoofs your browsing and 'misleads' the information that's harvested by advertisers, throwing all their research and calculations into conflict (wish I could recall what it was called though!) and I have no doubt that someone, somewhere will create a similar suite to conflict your electricity readings - if only to hide your times of movement at home, but hopefully to scramble the actual readings too!

The more the system tries to screw us over the more intent are the efforts at fighting back - and if they think they can outsmart the hackers they've got a nasty surprise in store.

There is nothing like a discussion of smart meters to bring out the crazy comments. At a time when the sheeple blithely allow mobile phones to track every move and transaction, they belatedly awake to tracking systems.

You are arguing that electricity is a human right and the utility MUST provide you with it (at a price suitable to you), it is nothing of the sort. It is a good that is available for transaction, you can decide to use it or not. The meter is owned by the utility and THEY will decide what kind is provided in their own best interest. You do not demand that every retailer uses a electronic till of your choice.

I understand the argument these meters are necessary due to a flawed energy policy that allows wind and solar feed-ins to the grid and would prefer that was not so, but unfortunately that ship has sailed. The reality of very expensive electricity often due to ridiculous rates paid for wind and solar is upon you, you WILL pay or sit in the dark. Do I have sympathy for poor seniors-you bet, but if the meters allow billing to the electric car charging frauds at public locations then hopefully some offset can occur.

Like so much discussion in yUK a socialist mindset that everything should be provided at subsidised rates is endemic. It is time to pay for past stupid policy decisions by the likes of milliband and camoron. I understand that is not pleasant.

Cascadian, I think you miss the point. Electricity is provided in the UK in the way it is because of UK government political policies. Really, it is not a free market. The complaints are not about the utility companies charging for the goods, but the political aims of the establishment. So, if anything, your complaint is the more "socialist mindset".

Budgie, I never implied the various utilities were part of a free market, the addition of DECC, another rent-seeker makes it even less so.

The fact remains the monopoly still has the right to meter your usage, and with govt connivance the ability to disconnect as it sees fit. Disconnection ability is now crucial given the piss-poor state of your energy provision (mainly due to milliband and camoron). Provision of electricity, water and natural gas is not a right but a highly desirable need in first world countries, the fact that disconnection scenarios are being openly discussed reveals that UK is falling into the category of second-world status (managed decline).

I see no political aims in this discussion only continuing govt ineptitude necessitating drastic action.

It will be interesting to see how easy smart meters are to hack and get free energy.

Just as with BSB and then Sky boxes way back when and Kodi boxes today, there is a thriving dark industry ready and waiting to get into these smart meters, hack them and make a small profit out of giving people something for nothing, or extremely cheap energy by under-reading.

How would the energy companies know, without a meter to meter the smart meter?