A Week of Remembrance

The centenary of the ending of the Great War will make this year's Remembrance Day celebrations some of the most poignant of our Cenotaph ceremonies. The Western Front holds a place on our collective national conscience like no other war; there was no such occasion in 1956 to mark the centenary of the Crimean War, nor in 2002 to mark the end of the Boer War.

The wars of the last century were fought by British and Empire, later Commonwealth, troops from every corner of the globe. Our brothers in arms were Christian, Sikh, Muslim, Daoist or one of a score of other beliefs, with skins both white as milk and black as ebony and every shade between. When you're together in the line, no real soldier is a biological racist.

Today, in British units stationed around the world on this special anniversary, the newness is not the racial diversity of our armed forces - this is long established - but the women who share the dangers and privations of the men. May God watch over them all and keep them safe in their duty. 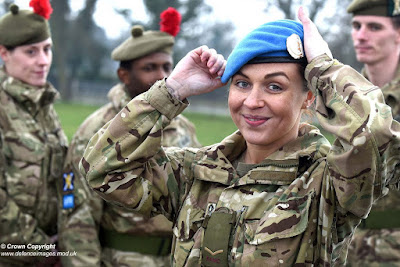 Email ThisBlogThis!Share to TwitterShare to FacebookShare to Pinterest
Labels: remembrance

"May God watch over them all and keep them safe in their duty."

Women don't recognise 'duty', that's a male concept. And one of the reasons women are unfit to serve at the front line.

Both dynamics will destroy the cohesiveness required of a military unit.

Why is the woman wearing a blue beret? And why is she looking so pleased about it?

At the going down of the sun and in the morning, we shall remember them.

"And why is she looking so pleased about it?"

It's the latest fashion accessory.

The problem with endorsing what is currently fashionable is that it is rapidly (ie often by a generation) replaced by new fashions. As a species we are curious: where did we come from? who are we? among many other questions we ask and attempt to answer.

The idea of "race" as an invented tool to help us understand ourselves was useful (given the limitations of language) - a primitive forebear of DNA. However it got taken to absurd limits and politicised, mainly by early socialists. The reaction to the injustices generated by racism is to pretend that there are no racial differences.

We will remember them, we say. And the "them" were overwhelmingly male. And overwhelmingly white British, colonialist and European men. Will we remember them - as they really were? Or will we paint over the past with the transitory spirit of our politically correct age?

I am afraid APL and budgie are entirely correct. By all means have some all-women battle on another front if you really must but mixed units (now slowly happening despite constant internal service surveys against) will be a disaster if ever put into the field on any real scale.

Take out the first sentence of the last paragraph and I would 100% support the sentiment expressed.

We should always remember and revere the efforts of all men and women who contributed their efforts to to success in World War 1. Women in those days understood where their natural abilities were best applied-Nursing and Red Cross Auxiliary and were awarded medals commensurate to their efforts. There were no participation awards.

The dismal photo of todays modern army emphasises the enormous and wrong-headed concessions made to female participation. Pierced ears-check, overdone makeup-check, manicured nails-check. Oh and give me the pretty blue cap please. No wonder it is no longer a lethal force and a laughing-stock.

The photo is a little absurd. The girl is an RAMC medic with a UN Beret. Nowt wrong with that but the inference we are supposed to draw is that she will be fixing bayonets along with the three Black Watch Jocks behind her. Note the, no doubt coincidental, inclusion of the 7% minority soldier as well. Soon we will see optional Rainbow Flashes on combat kit I fear.

A battalion of leathered-up body building poofs might be effective, if the ancient Greeks are any guide. The ladies, not so much.

It’s mildly amusing that the same feminist nutters who think women should serve in the frontline combat units would never contemplate, say, mixed boxing. And boxing has rules, unlike fighting to the death.

DP111 writes..
Current feminist dogma demands that women are the same as men and the military is to be used as a lab for social engineering, to "change" man. The military though is an organization dedicated to defending the nation with force.

It is so damned difficult to criticize this development. This thesis that women soldiers can be equally good as men, is absurd. Women cannot defeat men in any sport, either team or individual sport, and yet one accepts that in the ultimate "sport" of war, women are the equal of men.

Besides, women have a far higher human value, because combat death of a woman is quite unnecessary. Unlike a male fatality, a women soldier's death its not just her death, but a future generation is wiped out. When one factors that in, and as casualties are a necessary fact of war, men are far more expendable then women, as the death of a female soldier is the wiping out of a generation. Historically, both sides try not to harm "women and children". Corollary to this is that if women are accepted as soldiers, then there is no reason to safeguard women.

Besides men are more adept in all matters related to battle - cohesiveness and discipline. From the military PoV, men are faster, stronger, and generally evolved into fighting machines by nature. It is lucky for us that we technologically outclass the enemy at the moment, and can afford to indulge in these PC dramas. But this wont last. Women in a unit reduce combat cohesiveness, simply because men know, whether they like it or not, their natural instinct will be to protect women, rather then complete the mission. Women too know that. Thus the battle effectiveness of the unit is degraded.

Sexual liaisons within the unit, even in peacetime lead to sexual jealousy. This will tear a unit apart far more effectively then any bomb.

Then of course, a woman can get pregnant, and is then off on maternity leave for several years, all on the Defence budget. Meanwhile, the unit has lost a soldier, on whom a large amount of money was spent. Moreover, the unit is under strength. This creates even more tension of "unfairness" in the remaining men in the unit. Thus the army has to have another male soldier in readiness if a woman soldier is "incapacitated" or it goes under strength.

Then there all the necessary female hygiene requirements that the Logistics officer has to budget and provide for in the field.

So what use are women soldiers?

Women soldiers can serve away from the front line on many jobs.

It should be noted that where women (not wimmin) are allowed to operate in combat functions with NO CONCESSIONS to their sex they can be very effective-Russia WW2, Israel Defence Force and recent Kurd fighters.

Too bad that is not what the British Army subscribes to.