Last Christmas (for many MPs?)

Ipswich used to have an MP called Ken Weech, whom despite being a Labourite was generally held in some regard by the whole town. He was not ambitious, never aspired to the ministerial ladder, was happy on the back benches and was known as a fair-dealer without pronounced views. Every year on this weekend, after Parliament had risen, he'd spend two or three hours just standing about on Cornhill, outside the Town Hall, on his own, just shaking hands and making friendly small-talk with constituents. He was rarely unengaged - no-one was deterred from approaching him, he wasn't scary or pompous and he consequently generally had a constantly shifting audience of two or three around him.

He had a smooth way with the occassional pest who wanted a disputatious monopoly of his time - he'd just turn slickly to a passing shopper, smile, extend his hand and freeze the pest over his left shoulder. Likewise, he'd be gone before the customers of Mannings and the Golden Lion on the adjacent side of Cornhill spilled out after lunch, neatly avoiding the drunks.

We used to sit in the front window seats at Mannings and watch him at work. He was a pro - it was a joy to see. People were genuinely happy to meet and greet their MP, and the brief encounters enhanced a tedious pre-Christmas shopping scramble for many. It was one of those little social happenings from which everyone got something. All credit to him.

I suspect there's going to be a lot of Westminster flu about this weekend (like diplomatic flu, but the virus only becomes active outside of SW1). Which is a shame - as if there's a GE before next Christmas, it may have been their last opportunity to do so. 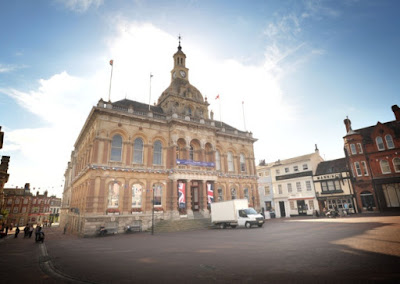 Ah those were the days my friend....

I can remember when you could walk along Downing Street, you could stand outside Number 10 or 11 and watch the comings and goings, if you wanted. Engagement might have been a bit more difficult, but along with the freedom of being able to get close up to the heads of government, we ordinary folk were much more deferent too.

This was not that long ago, before the IRA took Airey Neve I would venture, which reminds me of a much more modern example. At a "summit meeting" of European heads of government, the press were close to the building where it was all happening,, the high and mighty were arriving with their convoys of bullet proof limos, there was a heavy police presence...

... A battered BMW drew up to the steps, stopped and the engine was turned off, out of the driver's seat a suited man stepped out and went up to a policeman, the policeman pointed his finger and gesticulated a bit, and a curious reporter went over to see what was going on...

Apparently it was the Swiss president, he had just driven up from Switzerland and was looking for a place to park, before he went into the meeting.

As per Raedwald and right-writes.

This (now rare man-of-the-people) attitude works for the most senior managers too. CEOs and Board Members who walked the shop floor and were approachable - and more to the point were not insulated by their wealth.

I'm not a great believer in artificially setting a limit on top peoples' pay but I do believe that huge remuneration packages make the big bosses believe 'they are worth it' and members of an elite. I suspect that this corrupts their self-images (poor them) and detaches their decisions from reality (poor us). No golden handcuffs or golden redundancy packages would be a good way to start in reversing this trend.


Nothing creates a disconnect for the electorate than receiving what is clearly an automated response to correspondence. I refer specifically to my attempts to communicate with my MP re the issue of Brexit and the pathetic 'cover-all' reply that it elicited.

I must congratulate my MP on exaccerbating my frustrations and demeaning his position along with the animosity he's brought about as I now seek to find any and all means to frustrate his re-election.

The electorate MUST get back control over politicians and 'recall' must be brought back to the table as but one means of repairing the damage that Brexit (win or lose) has brought to politics.

I often wonder if this disconnect is because of an overabundance of the university-educated.

Over the years there has been a decline in people who have worked at ground floor level
and made their way up, and an increase in graduates coming straight from university and
assuming positions of leadership.

I am not against the latter in a modern workplace, but in politics there sometimes seems to be no
connection between the government and the governed.

At a local level, the only contact we seem to have with our councils occurs when we are protesting against
the removal of fields and trees.

Anon 09:27 has the reason. The modern MP simply doesn't know HOW to connect even if they wanted too; yes this is s a generalisation but the more we have politicos for life (i.e. study politics, work in politics, become a politician) the worse it becomes. Added to that number of barristers and solicitors and you have a recipe for "elite" syndrome.

WE THE PEOPLE, are living the life, there is NO disconnect.

Now where have I heard that "we the people" phrase before?

Where political representatives can be useful is when we need someone who has a PPE (trained politician) and can do the actual grind, until they inevitably go off piste and cease to represent our interests.

It is true most MPs are disconnected from their constituents. Like my Remain MP in a Leave area they will vote for Remain. That makes them suckers.

The whole purpose of the latest government threats to leave with "no deal" (nonsense, because deals have already been made) is to scare willing MPs into voting for Theresa May's DWA revolving-door Remain.

Mrs May is playing the gullible and the MSM like a harp. She is a master at it though, isn't she? And most MPs are easy meat for her machinations, especially the "knowing" Brexit MPs who still don't understand they are being gamed.

A walk down Downing Street was mandatory when we visited London as kids in the 70s and that despite , at the time, constant IRA bomb threats. I recall bags being searched everywhere we went; Science museum, British Museum etc

Anyways back on topic; after the disgusting performance of the gobSShitey,Yella Vested rightwingers this week, I am surprised MPs aren't calling for Armed Protection Officers and stab vests when confronting the Populace in its natural habitat. Every single MP remembers the fate of Jo Cox, every MP will have seen that twat on that pathetic march with his working model of a gallows.


@Jack - purlease.... "Yella Vested rightwingers"..... FFS, are you to paint everyone who has faith in the British people, the UK's ability to do business with the world and the desire for self rule as 'right wingers'? Grow the fuck up. By default that makes you a communist if you support the 'opposite'.

@Budgie - May isn't 'playing the MSM' at all. The MSM are fully onboard, paid-up members of the Globalist cabal who's desire is to see the UK subsumed into a communist EU.

John Pilger - a reportere with impecable credentials - was interviewed on RT recently and he has a lot to say about 'investigative journalists' and how journalists as a whole are betraying their principles by refusing to write about the FACTS behind such subjects as Brexit, the EU, US hegemony, Globalists etc. If anyone knows the media is CORRUPT then he should.

FFS, are you to paint everyone -Dave G

Actually that was the term used by their victim (yes the execrable Soubry, who also reports they expressed support for Hitler) and Goddard is another one of the Yakking Lemon's brexit bootboy brigade...

I have a lot of faith in the British people, just not in those who act in totally unbritish ways. We're British not French, we don't protest by burning cars or livestock nor by verbally assaulting/theatening women (even such as Soubry). If they, the Yellow Vested and Bellied, feel so strongly then they should write a sharply worded letter to the Times ...in green crayon.

As we already trade with the rest of the non-EU world 'quite nicely'(ie more than with the EU) according to the figures I have no doubt about the yUK on that score. And we already have 'self rule'...or perhaps 'self misrule '.

In the EU means being ruled by the EU. Declaration 17 (Lisbon Treaty) states: "... the Treaties, and the law adopted by the Union on the basis of the treaties, have primacy over the law of Member States ...".

That is not self rule.

Jack Ketch, Far from expressing support for Hitler, according to the Grauniad the demonstrators against Anna Soubry compared her to Hitler. You have inverted the truth to gain your usual nasty soundbite.

We might as well read made up stuff on blogs, and make stuff up on our own blogs and comments, they contain just as much truth.

I stepped onto the door at No 10 when Harold Macmilkan was in power.My day in Downing Street was a treasured memory of my mother who would never cease to remind me about it even though at 96 she was battling dementia. A bygone but such a happy and innocent era.