Electric scooters are the pain de jour for western governments. The battery and motor technology that was supposed to support the develop of electric cars for which governments are planning and legislating has instead flooded the market with millions of cheap Chinese electric scooters. Incredibly popular with the urban young, they can be kept in the hallway of an apartment and need no expensive concrete car parks in the city centres. The only problem is that governments hadn't anticipated them, haven't legislated for them and now are in knots.

The Police won't even turn out for a non-indictable offence these days but God help you if you don't pay the TV tax. It's all falling apart, common sense has divorced from their use of our taxes and electric scooters could be the straw that breaks the camel's back.  The Telegraph reports on how Paris is coping with the development (I won't call it a 'problem') and the answers are all unenforceable - unless one diverts police from anti-terrorism ops to scooter traffic control.

And God knows they must be having the vapours in Brussels trying to frame EU wide directives that govern scooter speed, motor power, battery capacity, fitting of winter tyres, compulsory reflectors, hazard warning lights and sound signal apparatus. Why do they need to? Well, they don't. But it's what central States do to validate themselves.

Technology is moving faster, though, than States can legislate. People don't see why we need such petty governance when laws against burglary aren't enforced. It's starting to slip away. 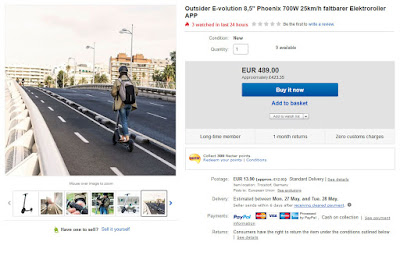 Like most law, most pedestrian footway rules, like Highway Codes, are not part of the EU's remit.

They are for the nations.

*sigh* but type approvals ARE - otherwise there can be no single market.

You try so hard to deny the EU's desire to govern every tiny aspect of 436m people's lives that you deny reality. Even Chancellor Kurz this week condemned the EU's urge to legislate for the minutae of ordinary folks' lives - 'laws to govern how we cook schnitzel'.

A couple of years ago, Mrs O'Blene bought me an elctric bike. It came from China, and was recommended by a local chum, who reckoned that it was well worth the £450.00 he paid for the one he'd bought, as he knew the importer well.

Wind back even further, when I was looking for a way to get to the station, a motorbike shop in Tonbridge poo-pooed anything Chinese, as he said they were made of chocolate(!).

But not so these days, my bike is incredibly well constructed, works like a dream, gets me up any hill I encounter and costs about a few pence to charge up once a week.

Of course, if BSA or Triumph made elctric bicycles to the same quality, of course I'd have considered one, but they would have had the usual EU bollocks police, safety 'experts' to deal with and after the unions tax, that £450.00 would have rocketed to about one and a half grand.

It's called international trade, which is something stupid politicians fear for some vague reason.

I’m currently in Brussels and these electric scooters are casually left littering the streets as part of a ‘ Boris’ bikes’ type scheme sans power charging outlets. I understand the city.authorities pick them up, recharge them and dump them around the city to be used by citizens swiping their ID card. The problem is, people when they finish using them just dump them on the streets and they lie there as vehicular litter. Not pretty

Oddly enough I encountered one of those yesterday, first time I'd seen an adult riding one. 18+ stone old geezer, looked like a circus act. Thing is pavements have already become unofficial cycle tracks, adults riding on the pavement really pisses me off, if they don't have the confidence to use the road they should walk. When was the last time you saw a bobby stop anyone for riding on the pavement, think you'd have to have a long memory. And don't get me going about twats who park with half their vehicle on the pavement.


I am encouraged by the growth in independent designers and manufacturers that exploit modern technology to everyones advantage yet remain small enough to keep under the radar of 'authority'.

This is rather like the slow reveal that the internet is creating by enlightening people to various truths - unstoppable but having massive effects on society.

We are creating an effective 'underground' - and entirely because the likes of Government and the EU want to control us. They are reaping the return of their interference in our lives.

Small wheeled scooters are not popular in Edinburgh because so many city centre roads are cobbled.

This style of bike is however as they have a built in carrier and the owner can remove the battery without much fiddling, leaving the bike as not worth stealing. Well up to a point. In Edinburgh it's always advisable to lock it in a safe place where there's CCTV.

The 20 mph speed limit means even these are viable.

I've read that the EU was persuaded to avoid regulations limiting the power of kettles before the Referendum because of the potential increase in people voting Leave.

Similarly I was first enlightened to the nature of the EU by the banning of domestic incandescent light bulbs when the only ready replacement was those awful CFLs.

Lower power vacuum cleaners are another example of unnecessary meddling.

Now while I have substantial philosophical objections to the EU, it is the effect on day-to-day small items that show the impact of the 'Big State, little people' mindset. So last millennium.

Sigh. So, as we see in the pages of any popular newspaper all the time, this so-called seventy-five percent of UK law that is supposedly made in Brussels does not include family and divorce, nor Town and Country Planning. Nor does it cover crime and sentencing. Heath, education and professional standards are outside its remit, as are land, property and inheritance, along with most tax bar VAT. Defence and security are not covered, and nor are electoral matters nor media regulation. Driving and parking rules and penalties appear to be for us too, along with employment and trade union matters, except for health and safety. It seems to be getting rather hard to find. Surely the Leave campaigns would not misIead anyone though?

PS, my 600W Henry vac works a treat, with 300W to spare. You can still buy any power that you like incidentally, but it cannot be advertised as "domestic" above 900W.

Power stations have to be kept ticking over, wastefully, to cope with peaks. If the peaks can be flattened, then they can be shut down, lowering both bills and CO2 emissions, not that you care about the latter.

So why is it such a big deal to leave then, and what is so "adversarial" about wanting to do so.

If we stay, all these things will surely become "European", otherwise what is the EU for. Not just for trade surely?

Don't forget, we have all been conscripted into EU "citizenship".

Defence and security, are you serious? EU "army", described by sir nick of Facebook prior to the referendum as a fantasy.

No EU rules impact employment? Then why would leaving reduce us all to bonded slaves of your US bogeymen?

For the record I don't particularly care about CO2 as there is no real evidence that it is doing any harm.

Power stations (and diesel gensets by the thousand) have also to be kept ticking over to allow the "renewable" fantasy to continue.

I didn't say no rules affecting employment. Read my post. However, the ones that do are Health and Safety, which includes the Working Time Directive, and jolly good they are too.

The rest of employment law, such as access to tribunals, contract fairness etc., is down to the Tory UK. Which is why it is a pile of sh** for employees, but legalised-by-statute breach of contract, whenever employers fancy, for instance.

Fine, you want the UK to be a global pariah, besides its laughing stock. Some of us would rather it weren't.

This Edward clown may well be dim but, as so many in thrall to the Soviet style, EU unelected dictatorship, there's no way he can be cheerful.

He sure has all the hallmarks of a Kinnock like hypocrite, too. A very unpleasant know all, successful only via Daddy's good luck as to how failed, hypocrite lefties dominate the EU hierarchy.

I love Edward's notion of the EU as a hungry fox persuading the chickens it's safe to open the henhouse door on the basis that it can't eat more than one chicken.

But of course it can kill fifty at a time.

The EU seems fine with Belarus these days and I believe Kosovo is up to join at some point. The four in Africa presumably would become part of ZE VORLD!! - sorry, Verhofstadts single Euro-African economic area.

The EU has no problem with pariah states, either dealing with them outside its border, or by it's high handed arrogance, creating them among its satraps.

Why is it so difficult to see why so many if us want to leave?

My son lives in Toulouse with his French wife and they have two cats. When they first got them I was told their names must begin with a letter allocated for the year the kittens were born. The year of their birth having 'B' allocated so both kittens had to have a name beginning with 'B'. I found this absolutely astonishing, they have rules for such pathetic nonsense. I've no idea whether this is French law or EU law, but the mind boggles.

Rare beefburgers? Why not. Once you have tasted a Bistecca Fiorentina in Florence (where else?) you simply wouldn't want any beef overcooked. The problem is that fresh meat has the majority of bacteria on the outside, and they get cooked off. Burgers are all outside, even on the inside, if you know what I mean. I reckon you might get away with it if you minced the meat yourself shortly before cooking, 'steack hache' style, but shop bought burgers and mince really do need cooking through.

On the other hand, what's wrong with shitting through the eye of a needle because of poor food hygiene? After all, it's what we eat curry for, isn't it?

There’s a right kicking in the air for the Heidi tyes, let the game commence.