You'd have needed a heart of stone not to have empathised with Nigel's agony yesterday. After having set up BrexitCorp™ as the perfect vehicle for one-man control, he found himself powerless to prevent the resignation of four of 'his' MEPs. His private company structure may mean he can hire and fire candidates at will, even stand-down 317 from the hustings, but as he has discovered, once they are elected they are no longer 'his' politicians; they are their own creatures, and no contractual straitjacket on earth can prevent them from repudiating his control.

During the last months of the rogue Parliament, my own party experienced a great deal of this sort of thing. Every week petulant Remainer MPs would break-off to join some new party, some even managing to join two new parties within a week. No sooner had they ordered their new party letterheads than the name and logo would change again. At the time there was much angry agitation from Brexiteers that changing party after election should automatically trigger a by-election. I disagreed then and I disagree now.

What if their party change is overwhelmingly supported by their constituents? Why should everyone be put through the nonsense of a foregone conclusion? I'm much more in favour of a constituency's right to trigger Recall in such circumstances, provided the bar is set at the right height. Under FPTP a representative's seat is a matter for the voters, not for their angry ex-party officials. Under FPTP once elected they represent their constituents, not their party.

Now I'm not sure what the EP's rules are. UK MEPs are put in place on a party list system; if a party gets enough votes for 10 MEPs, the top ten names on the list get in. I suspect once they're in they're in - but this clearly doesn't suit for example parties structured like BrexitCorp™. I'm sure what Nigel would like, if numbers 4 and 7 don't suit, is to be able to sack them and substitute numbers 11 and 12 from the list. Happily, such control is inimical to democracy, even, I suspect, in Brussels. 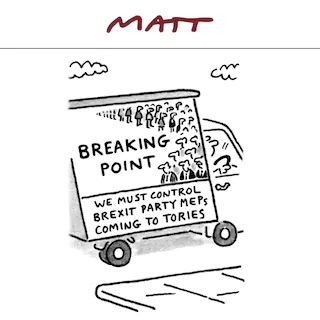 Are you suggesting that the structure of the Brexit Party has got anything to do with a bunch of defective tories?

Meanwhile the tory leader is so scared of the voters that he won't submit to an itty bitty interview with the pride of the BBC.

Your last sentence - 'Democracy' and 'Brussels' is an oxymoron

Our democratically-elected Parliament is supreme.

How can it ever be "rogue", therefore?

You're getting mixed up with the Government.

"What if their party change is overwhelmingly supported by their constituents?"

And how would you know that Raedwald, if a by-election isn't automatically held? Are we supposed to trust the defecting MP to tell us :)

It's interesting that all 3 of the defecting MEPs (plus Longworth) are on the conservative wing of the coalition Nigel built. It does make you wonder what inducements were offered by "those close to Boris."

Nigel isn't challenging Conservative-held seats. He's entirely focused on seats in Labour's heartlands. MEPs from that wing of the Party haven't defected and prospective MPs haven't stood down. They know how hard he is challenging Labour and how necessary it is.

Meanwhile, Nigel did well facing up to Andrew Neil whilst the Cowardly Lion is still ducking it, terrified that Neil will ask too many difficult questions about the Capitulation Treaty.

Uhm, if the required number of voters sign a petition to trigger a by-election; if no-one's bothered, why allow party control freaks to frustrate the will of the electors out of spite?

I don't see any easy way to 'undo' the Party system of our politics, but I also don't want to strengthen it by compulsory by-elections. I do favour recall - for any reason - if enough people are bothered by their MP's actions. We can only speculate how that might have played out over the last few months if some of those leaving their Party had been 'recalled' or even stood the risk of being recalled. Who knows, we might not have needed another General Election at all.

Raedwald: without a by-election, we won't know how many people are bothered. The politically engaged sign petitions; the vast majority only make their views known during an election.


Why do politicians continually get privileged treatment for their (betrayal) actions? An employer in industry can't 'walk away' from his employer and join another business without repercussions - or even an 'invite'. But to still get paid?

Any MP that walks away from his/her party should automatically be made to re-apply for their 'new' job and face a selection process like anyone else. Their wage should be stopped with immediate effect. Their previous contract would, I imagine, be null and void as would all benefits.

Why do we suffer the insults these 'mobile representatives' think we should accept?

"Under FPTP once elected they represent their constituents, not their party."

Incorrect. They represent themselves.

Oh and just noticed that you are suggesting that Nigel is annoyed. I have to say that he did not seem to be that annoyed during the interview with our string vested chum from Scotland, no his attitude was more of a shrug and "what do you expect from tories" kind of approach.

It has been clear from the election videos that the Brexit Party are doing their best to overcome the inbuilt difficulties of not being a red or a blue party and have to act appropriately. None of those defective tories were used in any of the shows, so he must have known of their treachery for a while.

Sadly the only honest political party will struggle to get one MP elected next week - a few dozen honourable Tories does not an honourable party make. Globalism stalks this land and as long as it does we'll have no honest politics. He who pays the piper calls the tune.

@Sen O'Blene "the silence of eliters like Heseltine, Major, Bliar, Brown"
They might be silent, but they, along with Starmer, Mandelson, Clarke and all the other establishment drones are plotting, I assure you. Before the returning officers announce the results their obstructionist plans will start to come to fruition. This is not the end ... etc.

You're right, Peter Barrett, I spoke far too soon! (BTW, I am Scrobs in another world, just bear with me please)!

But at least they read this blog, otherwise we might have waited a few more days, while the tired, grey old buggers got their sorry act together!

Re resignation of the 4 MEPs it is a sly stunt and nothing more to further weaken TBP. The Conservative betrayal is almost upon us...unless BoJo has played a blinder and fooled everyone.

"Why do politicians continually get privileged treatment for their (betrayal) actions? An employer in industry can't 'walk away' from his employer and join another business without repercussions - or even an 'invite'. But to still get paid?

Any MP that walks away from his/her party should automatically be made to re-apply for their 'new' job and face a selection process like anyone else. Their wage should be stopped with immediate effect. Their previous contract would, I imagine, be null and void as would all benefits."

Agree entirely. It is not only totally wrong but cowardly, corrupt slimey and sly of Chumbawumba, Soubry et al to not have stood in an immediate by-election...or more than one in their cases!

This takes us back to the early days of UKIP soon after it acquired three MEPs in the 1999 Euro election. I was No 2 candidate in the East Midlands where the party was unsuccessful.

There were ructions within the party and the leader, Michael Holmes, resigned from the party but continued to sit as an MEP. It was the early days of New Labour. My wife, who has a noticeable Scottish accent, phoned up the relevant government department to find out the situation. As you say, election was by party list, placed in order by the party not the people. If an MEP resigned from the party, was he still an MEP?

She was passed from one government department to another. The third was the Cabinet Office and they did not know either! Eventually Holmes did resign as an MEP and the next on the UKIP list was appointed. But there was nothing to,stop him continuing to sit - either as an independent or for another party.

However, it is not as straightforward as that. Some years later, Roger Helmer MEP (Con) was considering retirement. Next on the list was another keen pro independence candidate. But the Conservative party did not want him and intended to substitute another. So Roger stood again as a Conservative, got re elected and transferred to UKIP.

This was a result of Ken Clarke’s responsibility for internal,party “ democracy”. If it had been left to party members there would have been a massive cull of Europhile MEPs, so he made a rule that members could not deselect a sitting MEP

i am still uncertain as to what power a party has to remove a candidate from the list and appoint another, assuming the candidate remains a member of the party. There are no by-elections if, for instance, a member should die and I had always assumed it was automatic that the next on the list stepped up.