Shutters start to come down on internet freedoms

We are now, as an advanced culture, moving into a phase of the most pernicious and regressive restrictions on free speech since we fought battles in the 1960s and 1970s to establish those freedoms. Oh I know that's been the cry ever since when, mostly from those with extremes of views that no-one missed very much. 'Spiked', which hides under our spoof Guardian offers, has long advocated a pure freedom that would allow anyone from kiddie fiddlers to murderous Islamists to post anything, but most of us want some restrictions. And that's the problem. First, we're a European nation but there's no homogeneity in the law - 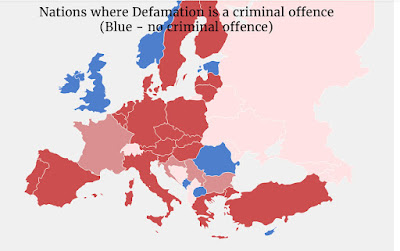 In most of Europe, defamation is a criminal offence, and in the dark-red nations it's an offence for which citizens can be imprisoned. The UK, Ireland and Norway (in the fringe blue nations defamation tends to be dealt with by a midnight visit from men with guns) are alone in upholding the freedom to risk only one's wealth from defaming someone. However, as we've seen, the Online Harms (how loathsome is that title!) White Paper proposes making a number of non-criminal statements into statements to be censored, under the pretence of protecting children but clearly aimed at protecting politicians and wealthy figures in public life.

In France, the release of a video made by M Macron's chum Benjamin Griveaux of an act of masturbation has angered the énarque elites; it should be the right of all French politicians to send Onanistic videos to vulnerable young women. Or maybe to their grandmothers. What has annoyed them in particular is the extent of internet anonymity that allowed the spread of the material; they want to include measures to identify wanking-video re-posters in a proposed raft of anti hate-speech legislation currently going through parliament. However, as Politico EU has reported, the draft French legislation is already in trouble with the EU, who consider it incompatible with EU law.

In Germany, legislators are set to pass laws requiring internet companies to report offending posts to the police. As the FT reports


Under the planned new law, which is the toughest of its kind in the world, social media platforms will not only have to delete certain kinds of hate speech but also flag the content to the Office of the Federal Criminal Police (BKA). Posts that companies will be required to report include those indicating preparations for a terrorist attack and the “formation of criminal and terrorist groups”, as well as those featuring instances of racial incitement and the distribution of child pornography. The networks would also have to give the BKA “the last IP address and port number most recently assigned to the user profile”.

However, given that defamation is also an imprisonable offence in German law, it is easy to imagine a tweak or two to include insults aimed at politicians and public officials - the law stands as

However, one major issue remains. The national location of servers on which the offending material is posted. Facebook, Google and Twitter are already rolling out systems architectures that avoid a physical EU data presence. The effects of GDPR and swingeing fines to date have already made them cautious.

If US servers (and, less likely, UK servers - our civil servants love the German defamation laws) are immune to the new rafts of Euro Censorship legislation, what option does that leave for French and German governments except to restrict access to social media in the same way that China does? Are Euro versions of Weibo, WeChat and YouKu the future?
at 10:30

Email ThisBlogThis!Share to TwitterShare to FacebookShare to Pinterest
Labels: censorship


Will such censorship actually achieve anything? Is the Government confident that they can actually do what they feel is necessary without simply driving the (perceived) problem deeper into recesses of dark web locations?

All that comes from these proposals is the exposure of Government fear over the (various) truth(s) being disseminated as they gradually lose control. But t'internet is a 'monster' that can't be controlled - that much is obvious.

All 'they' can do is shut it down.

Blojo wants his Ofcom wankers --but they will lose. The fuckers cant even stop Indian scamsters ringing people here up 2 or 3 times a day.

If they get their Ofcom then millions of us need to send 20-30 complaints in every day for 3-6 months. Mainly about the Political parties, EUBBC etc and all advocates of censorship.

Several million cases backlogged within a couple of months should help fuck them up nicely.

They're wise to that Mr Ecks - under the proposed legislation, it won't be possible to complain to Ofcom. They'll bounce the complaints right back to the social media operators, who will be under no obligation to respond to individual complaints.

The law obliges the social media companies to take a view on posters, not on individual postings. If Google decides that the raedwald blog is likely to post offending material under the government guidance, it is obliged to close it down.

No complaints. No voice. No redress.

I'm always puzzled by men who show their private parts, either as action or display. What exactly are they thinking? What reaction do they hope for? What statement if any are they making? If they think women will find them alluring they obviously know nothing about women. Anyone know?


I suspect the assumption is that because men like looking at women's junk the same will apply to women looking at men's..... lol

It is a pity that all the internet volunteers, who assisted the Tory/Leave campaigns - mainly by spreading defamatory lies about people in the opposition parties and in the European Union - could not be arrested here as they would have been in nearly all the other countries of Europe.

It would have been good to have seen the editors of the Telegraph etc. in prison, rather than their papers simply paying damages too.

It's a very enlightening, map, Raedwald.

One of the most essential tests of freedom is whether you can safely mock and deride the monkeys at the top of the tree.

We should aim for more freedom, not less.

Dictators tend to be thin-skinned, insecure and murderous. I want none of them.

Eeh, you are a little tinker, Anon.