How the Guardian tells lies 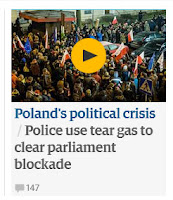 As one of the UK's post-truth behemoths, the Guardian still trades on a reputation established in more honest times, before the paper carried fake news as a matter of course. Jonathan Freedland today condemns what he terms the lies of others - but ignores his paper's own record of journalistic dishonesty.

In the paper's news content you don't have to look far to find prime examples of those heinous journalistic sins Omission, Distortion and Misrepresentation. It took me just a few minutes today to find the following in this morning's report in the paper of the protests outside the Polish parliament; 'Police use tear gas to clear parliament blockade' reads the headline, but in the piece itself the gassing is hardly mentioned - "Opposition party MP Jerzy Meysztowicz told the television network that police used tear gas to disperse the protesters who tried to prevent the cars from leaving." In other words, the paper has no evidence for the use of tear gas, no independent corroboration, just a hearsay anecdote from one of the protesters.

Nor it seems did the paper's 'journalists' seek to confirm the story with the Polish police - or perhaps they DID check with the Polish police as to whether tear gas had been used. And didn't like the answer, and so lied about it. RT also carries the protest story -  and reports "Warsaw police spokesman Mariusz Mrozek subsequently denied reports that police had deployed tear gas against protesters, claiming that what might have looked like tear gas in fact was smoke from fireworks thrown by demonstrators".

And so the truth emerges. Protesters trying to prevent the convoy of official cars from leaving threw 'fireworks' - in probability marine signal flares - the smoke from which was interpreted by an inexperienced protester in a heightened state of excitement as tear gas, and the Guardian reported this as a fact.

So the Guardian's strap line is simply lousy, unacceptable, fake-news journalism, based on the single uncorroborated hearsay of a single demonstrator and officially denied by the police. It's either omission or distortion, take your pick. And in Freedland's own words, it's a lie.
at 07:31

I'm afraid that the Guardian is not the only one; they're all at it, so that they can grind their own regular axe.

Where can we go to get the unvarnished truth ?

Well what else did you expect from that bunch of left-wing cunts? (I use the plural advisedly, because they are "holier than thou"!)

The fucking BBC AND ITV for that matter bleating on about Aleppo. Fuck me!

They're not the only one's. The Mail is at it this morning. Apparently everything is the fault of the Russians. They've wheeled out that idiot Hastings to try and lend some credibility to the piece - http://www.dailymail.co.uk/news/article-4042774/CIA-says-Putin-hackers-putting-Trump-White-House-Max-Hastings-says-entering-era-internet-warfare.html

The public aren't having any of it. It's quite amusing to see them mock the press. You'd have thought that someone would have noticed by now.

@rapscallion
Agreed. The establishment and MSM don't like the truth, so they lie about it. Polish demonstration and tear gas? Just another lie. Trump wins the White House and it's all Russia's fault? Tell me another one!


Sadly we live in a world where a significant number of people DO believe the trash, lies and cr@p the MSM churn out.
Take the biggest and most prolific lie of them all - climate change - and see how that has insinusated itself into all aspects of everyones lives, even to the extent of massive additional and unnecessary cost/expense and <where are the protests?

Nothing (usually) gets peoples ire up more than being made to pay for something they didn't want, didn't ask for and don't need but, buoyed by the easy gullibility of the public-at-large (as amply proven by the CAGW lie) the media now feel 'empowered' to make up whatever CONSENSUS they feel is necessary to push the globalist/elitist agenda forward.

Perhaps we're reaching the 'line in the sand' and the pushback is beginning?

"Where can we go to get the unvarnished truth ?"

Harry Truman remarked that the only dangerous thing about living on a farm was that you might get kicked on the head by a mule, and wake up believing what you read in the papers.

Newspapers have always had an agenda. So have historians. So have you. You can read a variety of sources and try to piece together some provisional idea of what may have happened.

Very often, nobody knows what really happened, and nobody ever will know.

The Manchester Guardian was better than the Guardian.

Well here is something of interest that is most definitely not from gruaniad.
https://www.superstation95.com/index.php/world/2705

Whenever someone mentions the Guardian I always think of hysteria for some reason. The Omission Raedwald mentions could be a sign of selective amnesia. Distortion, brought on by volatile emotions. Misrepresentation, the result of attention seeking. The symptoms are there and certainly, if you read the Guardian, you can almost imagine what it must be like to be a snowflake in 2016

Talking of the Guardian,I can remember back when fish and chips were wrapped directly in the newspaper without that nancyboy piece of tissue to protect you from the deadly newsprint. Slippery slope that, probably about that time that the snowflake gene was spliced into our stock.

This raises some very seriously awkward questions but it also explains a whole lot else besides.................:

"Earlier in December, SF already noted that the US despearate attempts to push a “diplomatic solution” in Aleppo could indicate that the Obama administration stalling for time to extricate US mercenaries and special service members from the Aleppo pocket"

What a set of cunts and begs just whose side are we [UK] on - pro al Nusra and Isil - must be.

Actually, almost all the papers, are, if not deliberately lying, reporting false information.
The Telegraph, which I read, certainly does so.

The BBC do their best (contra to the previous thread), but there's so much falsehood around it is difficult to tell.

After all, this is part of a 1300+ year long religious civil war & we should have no part in it, at all.

Luckily, I have never read the Guardian, so am unbiased.

Are there any people who can write stories better than our established bloggers?

The Grauniad is not the problem, the BBC is. The people who buy the Guardian are welcome to it and its lies; they have a distinctly minority fetish.

The glue in the establishment edifice is the BBC. From what I see the national BBC current affairs output on Radio (I hardly ever see BBC TV, since I won't now pay the BBC a penny) is dominated by (ex) Guardian journalists and has been for decades.

Worse, the BBC pushes the Guardian (cultural marxist?) world view relentlessly, even in non-news programs - it's easy to spot provided you have been weaned off the BBC for a few years, but difficult if you are still hooked.

Some believe (!) the BBC is unbiased (the BBC relentlessly claims that), or is trying its hardest to be so. These people are entitled to their view. What they are not entitled to is making other people pay for their beliefs, or stopping those of us that loathe the power of the BBC from watching other TV if we wish without subsidising the BBC.

Looks like the goons that filled Phil Shiners pockets see no reason to restrain their largess with your money to "victims" eh?

G Tingey: "The BBC do their best (contra to the previous thread), but there's so much falsehood around it is difficult to tell."

Are you out of your mind??

Best at what, destroying our entire culture, promoting African animism?

"so much falshood around it is difficult to tell."

FFS, Greg. Are you determined to have the wool pulled over your eyes?

The BBC ARE the instrument of promoting faleshood.

APL
Go & watch faux news, then or believe the fascist lies of Breitbart.
You have no evidence, other than the echo-chamber of your own head.

Where are they "promoting african animism"?
Not that it's any worse than christianity, islam or marxism, mind you ... ( oops )

There are lies, damned lies, true lies, and fake lies.

The MSM does them all.