2020 Migrant wave - and why Europe needs Russia as an ally

As a lengthy (45mts) but comprehensive briefing on the matter, the podcast doc by David Willetts now available from Radio 4, is reasonably good. Using the analogy of a python swallowing a pig, the blurb states


"a big bulge makes its way slowly down the snake from the head end to the other end. That's a bit like what's happened to the UK demographically. The baby boom generation - which has changed Britain politically, culturally and economically - is now retiring. That means a large bulge of pensioners with big implications for the generations that come behind them. Other advanced economies face a similar challenge and emerging economies - most notably China - will be dealing with an ageing bulge themselves soon. But in Africa, the bulge is at the other end. A very young generation is about to make its way through the snake."

And it's the African bulge that is exercising minds in Europe.


The current migration report of an Austrian intelligence service shows why the time for action is scarce: experts warn that 15 million young adults will be without jobs by the year 2020 in Nigeria, the Republic of the Congo, Sudan, Ethiopia and seven other African countries And the masses want to emigrate to Europe.

Whilst the Middle East youth bulge is now passing through and will generally decline by 2020, two exceptions; Iraq and the West Bank and Gaza are both expected to rise to 29% by 2020, when Iran's will have fallen to 22%. Both flash points will continue to push migrants into Europe through Turkey and the Russian federal states.

Only utter fools believe that the present policy of the world's navies providing a taxi service from points 3 miles off the North African coast to Europe is sustainable. For that's the range of the boats and the fuel now being used by the smugglers; it's cheaper to buy a VHF to make an SOS call just outside the territorial limit than 100 extra litres of diesel. No ship can ignore a distress call, and a nice NATO frigate will come collect you to take you to Italy.

But to contain the migrants in North Africa or the Middle East will need the active co-operation of Russia, both on the ground and at sea and at the UN Security Council. It may involve taking control of sovereign national territory in North Africa to hold (and feed) millions of migrants.

This is Europe's biggest challenge. And we need Russia as an ally to face it. 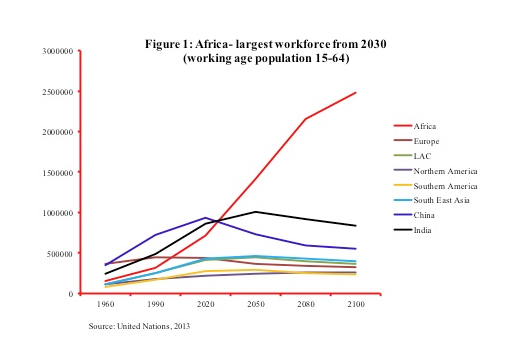 "No ship can ignore a distress call"

True, but they don't have to transport them to Europe; all they have to do is take them to safety, which as you point out is only about three miles away.

Europe, bogged down by EU and with her hands tied by the ECHR, isn't capable of dealing with this pending crisis. And for historic reasons will never ally with Russia, although it will with Turkey.

The British Government will have to take urgent, unilateral and firm action if it wants to prevent the UK from being overwhelmed by African gimmiegrants - but since when has it ever been willing, or capable, of doing that?

Why would Russia help?
In two generations its turned western Europe (Germany) from a dangerous powerhouse that can at any time storm east and sack Moscow, in to a theocracy of goat molesters who couldnt send 100 men to Moscow, never mind 100 divisions.

They, correctly, only view muslims inside the wire as a threat, and are happy to use that against real threat to mother russia

Domo - I'm suggesting that the price Europe must pay for Russian co-operation is a lifting of sanctions and a retreat from the EU's idiot support for Ukraine. Putin understands a deal.

It may involve taking control of sovereign national territory in North Africa to hold (and feed) millions of migrants.

Spain might be helpful here............... cede Ceuta. I mean, they could be seen to lead by example next time they start flag-waving about Gibraltar. Relatively easy to fence off, port infrastructure already in place for food distribution; what's not to like? Do it for Europe! Yayy!

It's much worse than just the numbers of people - there could be mass starvation across northern Africa. Europe cannot provide sufficient food to make up the shortfall in these states' domestic supplies - see David Archibald highly recommended book "Twilight of Abundance" for a realistic (& chilling) predictions of their likely demise.


If we take into context the 'rise of the robots' and the consequent loss of manual labour positions - the ONLY work such African immigrants would be suited to - then what, precisely, would we be doing with these people?

Seems like the only solution would be for the 'robot' scenario to disappear (EMP?) and a return to serfdom happens in its place.

'If we take into context the 'rise of the robots' and the consequent loss of manual labour positions - the ONLY work such African immigrants would be suited to - then what, precisely, would we be doing with these people?'

According to Carney the next income group to lose any meaning in life, sorry jobs, are the middle class with AI taking over abstract thinking ability. That's probably correct as it's already here on the margins in banking and finance. His estimate is 15 million jobs. Manual labour positions will continue to decline as automation moves further into manufacturing and onward into agriculture. The next stage is general purpose free movong robots which will hoover up ancillary jobs by the tens of thousands - think fork-lift truck with hands (end effectors), precise movement and a brain.

Seriously, we do not need immigrants from anywhere. The future is bleak enough and from an employment perspective an utter disaster as a massive collision between population growth and technological progress is already on the cards this century. If you've ever stood in a factory, alone and in complete darkness, and listened to a hundred machine tools manufacturing parts, you'll know what redundant means. That will happen in fields soon, the tilling the sowing the planting and all the rest: robots.

Any invasion armed or otherwise is a threat to our existence and should be resisted by all means, easy said I know but I'd back any action no matter how drastic.

They're managing a lot of it themselves among themselves but it needs accelerating and that needs to start soon.

Span Ows, after the virulent strain of Ebola escaped from the research facility and was only controlled with difficulty, it's highly likely there's another, similar agent ready for the next stage of the Plan.

Raedwald: "But to contain the migrants in North Africa or the Middle East will need the active co-operation of Russia, .. "

As a mark of our determination, should we not first prosecute, Clinton, Cameron and Sarkozy for their destruction of the Libyan regime.

The punishment on being found automatically guilty, would be a datcha in downtown Benghazi with a billboard on the street outside announcing their presence 'sans' police/special protection services.

It's be worth wiring the place with CCTV just to watch the show.

Cancel the NATO frigate, pick them up in landing craft (which can be beached), search for then confiscate and destroy all mobile devices,sail out of site of land, go round in circles till nightfall return to deserted portion of invaders home country, drop them off assuring them it is Italy, Greece or whatever is flavour of the day.