For non-readers of Cyrillic (including me) the headline in the Bulgarian Times claims that the EU intends to ban Snowmen as racist and sexist - unless they are non-white and recognisably female. 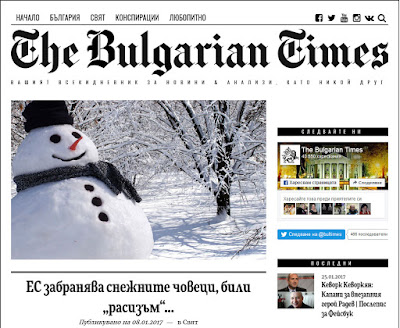 An EU spokesman immediately branded the story as nonsense, and the EU Disinformation Unit clarified the misunderstanding as follows: (unverified)

"The Commission merely reminded the Bulgarian government of the EU Public Actions Directive, which requires that European governments and local authorities undertake service provision in line with anti-discriminatory EU law. In this case, snowmen erected by government or local government staff, or erected in public parks, or on public highways, or military bases, or any land, locus or place on land or water owned or controlled by a governmental or quasi governmental organisation, must undergo a full Risk Assessment, be constructed in accordance with a written Method Statement, with any significant costs (e.g. for carrots or pieces of coal) submitted to the EU under the State Aid regulations, including the requirement for a 'Nil' return, and that each Snowman erection must be documented in an Equal Opportunities Achievement Statement. The erecting authority must demonstrate and publish electronically how the Snowman helps achieve the EU's aims in the Year of Organic Diversity of sustainable craft development and in imprinting the semiotics of diversity.

I was up and about a bit early this morning and logged on to get my favourite blog news and saw this. My first thought was April 1st. No, it's still dark outside, so it can't be that!

Anyway, at the beginning of January I was in Madeira for a weeks' holiday and during a guided tour on a mini-bus the driver pointed out the banana plantations (up to this point I was unaware that Madeira grew bananas) and he went on to explain that Madeira bananas were the nicest bananas in the world but the EU had banned the sale of them within the EU because they are too small and the wrong shape. Instead, EU countries get their bananas from Costa Rica. My first thought was that maybe the climate change department isn't talking to the food and agriculture department. Then I thought, "half the world is at war and the other half is starving and here we have a bunch of irrelevant lunatics pontificating on the size of bananas". So I aired my thoughts on this to the rest of the mini bus folks only to find they were fully paid up snowflakes who were "offended" at my rant. Well fuck 'em, that's what I say!

Very much like the "roast taters gives you cancer" story, which I notice no-one in authority has denounced yet. Digging further into that story we are told it is a EU directive that our FSA will be ratifying later this year!

Come on Theresa, if "Brexit means Brexit", we should not be accepting any more directives/laws from the EU now. We have enough bullshite to unravel as we try to escape the EU shackles with-out adding to them!

Surely, a full Risk Assessment would preclude the use of pieces of coal.

So this is a send-up isn't?

Somebody reassure me, please.

The idea that some EU twit is going to be dispatched to the hinterlands to assess "snowman erections" doe have its attractions though.

I wonder how that assessment is to be achieved...

How does a snowman get his erection ?

For too long we have bee putting up white snow. It is time to legislate for it to reflect all the colours of the community. Also they are henceforth to be referred to as snowpersons.

Without positive and progressive action we will forever be stuck in our present racist and misogynist tyranny.

Snowman erections nigh on far too cold. Now a Snowwoman might have firm turnip tips.

Raedwald, Your piece is redolent of coldism and anti-gender-fluidism, and is obviously advocating white supremacy, not to mention your attempt to disguise a carrot fetish. I must report you to the Labour Gauleiters.

The thing that concerns me is who gets the job of documenting a snowman's erection, and does sending staff out in cold weather contravene the Health and Safety regulations concerning working condition?

@Bill Sticker - no not Health & Safety regulations but the Working Time Directive: given global warming, officials from the EU must travel a long way to find a snowman and must breach the WT directive. Furthermore, they must carry reams of paperwork (in itself a health & safety risk the importance of which you are admirably aware ) in case they find evidence (two lumps of coal and a carrot suffice) of the existence of a snowman who has, lamentably given the travel time vis-a-vis global warming, disappeared, as they must record this in quadruplicate such that an investigation by the ECHR can occur to establish if his human rights were breached and who is to blame. A precedent has, of course, already been set in the judgment of God-v-Snowman X (2015) which found in favour of Snowman X whose lawyers are still in pursuit of remedy from God, expectant that since God's resources are infinite, their fee will be 15% of infinite sums of dosh.