Could Germany's next problem be an Austrian? 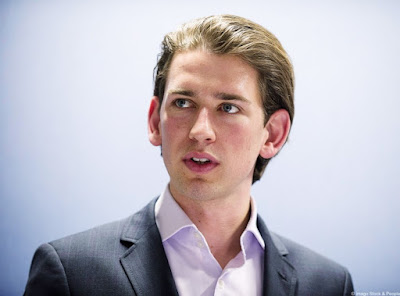 The young fella above is, at 30, Austria's foreign minister, the new leader of the ÖVP and mooted as the country's next chancellor after October's snap election. Sebastian Kurz could also face down his German opposite number - whether Merkel or Martin Schulz - after Germany's September federal elections. The architect of blocking the Balkans migrant route by ignoring the EU and Germany and stitching up a deal with Hungary, Slovenia, Croatia and Serbia, Kurz is also a fierce critic of Merkel's migrant policies.

The ÖVP is the traditional centre-right party in which farmers, burghers and family / craft business owners found a home. Since the war it has a long history of governing in coalition with a Blairite, soft left SPÖ - but as elsewhere in Europe, the two are in trouble. The hard right  FPÖ, home to horny handed beer drinkers and drivers of overweight SUVs who resent change and migration, came within a whisker of putting their man Herr Hofer in the presidential palace. Right now they're polling high, and expected to do well in October. That the next Austrian government could be an FPÖ / ÖVP coalition is a distinct possibility; Kurz, the cute face, out in front but Heinz-Christian Strache, the FPÖ's boss, as the iron fist.

A Kurz government would bolster the Vizegrad 4. Hungary's Orban is already a Kurz fan. His success would leave Europe with an ideological block stretching from the Baltic almost to the Adriatic that opposes the policies of the Franco-German pact; Christian, orthodox in belief, small c conservative, with congruent cultural traditions and populations largely intact from cultural enrichment, the old MittelEurope nations could be Germany's worst headache.

Germans oppose squandering their wealth for indolent Mediterranean folk to sleep in the Sun their wine-quieted eyes. The Eastern bloc in contrast grafts hard and multiplies investment. Austria is stuck between Italian idleness and Polish zeal - accustomed to high tax socialist languor but with a northern European work ethos and guilt complex. The coming election may be a leap northwards.
at 07:33

So, Italy currently the way round the eMaginot Line; Ukraine, potentially?

How on earth does someone, age 30, become a potential Chancellor? What experience does he have to bring to the role?

Pitt the Younger became Prime Minister at 24. Alexander the Great, "overlord of Asia Minor and Pharaoh of Egypt became 'great king' of Persia at the age of 25," as the BBC says.

Perhaps it's not lack of worldly experience that's wrong with our political class, but lack of a rounded education, talent and a moral compass.

When I first came across Kurz he seemed promising, but it's been pointed out to me that he is the author of "15 Theses of Integration":
http://kulturelle-integration.de/pressetext/15-thesen-fuer-zusammenhalt-in-vielfalt-aufruf-zur-mitzeichnung/
and see also:
http://www.ozy.com/rising-stars/sebastian-kurz-the-millennial-foreign-minister/60567
(extract): "Kurz intends to make his little country into a model melting pot. Perhaps this is a strange ambition for a right of center leader, but, he says, “There’s really no other choice.”….(Austria’s) small size and high proportion of immigrants may make Austria a sort of microcosm or petri dish for the demographic remaking of Europe. Almost one in five residents were born outside the country….What this means in practice, for Kurz, is welcoming immigrants by giving them tools they need to assimilate."
Kurz is an integrationist. He might espouse tough-ish measures on Islam, but far from wishing to defend his people from cultural dilution/annexation, he proposes (naïvely IMV) yet another starry-eyed and futile attempt at integrating hordes of folk who care nothing for Western culture except what money they can make out of it.

Oh, and re "Germans oppose squandering their wealth for indolent Mediterranean folk to sleep in the Sun their wine-quieted eyes," they seem strangely reticent about demonstrating this, given the continuing readiness of Merkel's government (and she's still hugely popular) to subsidise massive EU handouts to e.g. Greece. German friends of mine, when I questioned them just a few weeks ago in person (these are professional folk in senior positions, well informed) rejected any suggestion that Schulz might be in the ascendant and Merkel is losing her popularity. "No," they affirmed almost vehemently, "she'll be back in post...."

"Perhaps it's not lack of worldly experience that's wrong with our political class, but lack of a rounded education, talent and a moral compass."

At the moment watching the UK GE seems just a matter of who can blunder into damaging things the least - not confidence inspiring stuff.

seen this presentation by Rainer Wendt -
President of the German police union ?

Malcolm - Good points. All true. Kurz accepts the absolute reality that Austria will never, ever deport settled, legal migrants and that therefore they must be fully integrated. However, he rejects any imposition of new EU 'quotas' of Italian / Greek migrants and will hold the southern route, via the balkans, firmly closed. He's a pragmatist - force the assimilation of those here, degrade their Islamist allegiances, and keep the borders closed. It's the best anyone can do and win elections ..

And agree on Merkel. If only because I don't think the Germans trust Schulz not to splurge their hoarded gold on EU casualties, whereas Mutti will keep her own Speise' well stocked

The last thing any country needs is a Merkel bailout. It is made under such horrific terms including lots of punishing austerity measures which ensure the country receiving such a bailout becomes even more indebted with no means of ever making them able to get out from under. Inevitably they need further bailouts just making matters far worse ensuring said country becomes virtually a slave. The EU are not really interested in having the bailout repaid, they are interested in having total control. The EU & Merkel are truly evil. So happy we're leaving.

... and just a note on integrating Austria's migrants; a third of them are from the former Yugoslavia, and another third from Turkey, making them far less difficult to assimilate than afghans, pakistanis, bangladeshis, somalians, nigerians, iraqis, iranians, tunisians, moroccans and libyans - the UK's staple.

One thing about the FPÖ - they might be many things, but being anti-EU is not one of them. They are a pro-EU party.

It's been bothering me of late - the surfeit of boss-people with childish faces. And I now know that I mean 'childish' - not child-like as in 'young'.

For youth is not the problem; what they lack behind the front is any depth of thought, knowledge, or experience. They got where they are by other means, e.g. by whom they know rather than by what (the USsA way).
Well done Austria for putting an iron fist behind your pretty-boy.