It's time to jail Rupert and Fenella

Back in the early 80s Rupert and Fenella's conspicuous hipness was pretty innocuous; they would open a baked potato stand in the newly renovated Covent Garden or build an accessible recording studio in a disused Methodist Church hall. Imbued with money and a desire to demonstrate their fashionable altruism they would tag these adventures 'community' or 'open' or 'collaborative' and the more astute amongst them would later sagely turn them to sound profitable investments when the reputational kudos was exhausted.

These days Rupert and Fenella have to go a bit further afield to win youthful cachet.


"Rupert's bought this old Scottish Trawler, yah, and he's re-purposed it to carry a couple of RIBs and built a mini clinic, all through this charity we've set up - 'Seaguard Rescue International' - we've had some pretty big donations including from you-know-who who's still using the billions he made on Black Wednesday ...yah, it's all terribly tax efficient and registered offshore; well basically Rupert patrols the Med just outside the Libyan territorial limit til he gets a satphone call from a refugee boat, meets it, takes the refugees off and lands them in Lampedusa.

We've got a Facebook page with live Sat video feed and Rupert looks simply scrumptious and sooo dashing and we've saved hundreds and hundreds of lives yah and Tarquin and Penny Arsetrump are down there too in an old coaster with an onboard dentist - Tarquin's younger bruv, actshy- and they reckon the NGOs - that's what they call us - have landed nearly ten thousand refugees in Italy this year, yah, and we've got the peak season coming ..."


Of course what all the Ruperts and Fenellas and their socially committed financial backers don't realise, but what our government increasingly does, is that they're breaking the law - by knowingly making themselves part of the people smuggling chain facilitating unlawful entry into a EU country, they are quite possibly in breach of s.25 of the Immigration Act 1971 (as amended). Fenella's next phone call might be less hubristic.


"Mummy? Oh God it's awful I'm at Paddington Green police station and Rupert's been seized by the SBS and brought home and charged with people smuggling and they say we could get fourteen years! Oh Mummy please help; the Navy sunk our trawler with gunfire and Tarquin and Penny are on the run in Panama oh it's all such a mess ......" 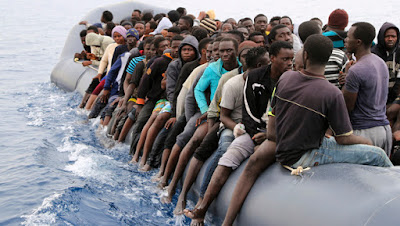 I think you have the wrong target Raedwald...

It's down to the Chinks, they are making too many cheap ribs and flooding the market with them.

Well that's what the nice man from the EU said anyway...

Its not Rupert and Fenella


Why does George Soros hate white Europeans so much? What have they ever done to him. /sarc

But seriously when will the world acknowledge that some Jews really really hate white Christians.

Pretty close to the actuality I guess.

How many organisations? - it's more than 10.

How many articles in the MSM?

There were a couple of recent reports that an Italian prosecutor - they have a fair bit of independence - is looking into the Italian versions of Rupert and Fennella.

I think I recall correctly that the Investigator had been intrigued by Mafia connections in the people smuggling, so if R and F get charged with racketeering, serves them right.

Greenspan inflated the biggest economic bubble ever in finance, IT ( dot com boom ) and real estate. Basically sitting on his hands while it developed.

Bernanke refused to deal with the repercussions and bailed out the big banks, General Motors etc, which have since continued with the same policies.

Yellen !? All three have something in common. While the economies of the West are failing. Wonder what that could be?

{I'll save you the bother. I already know a religion isn't a race.}

The topic is Rupert and Fenella conspiring with and elderly Hungarian wallah and ex Nazi collaborator, to ship hundreds of African idiots* fleeing to Occidental societies built by Occidentals, because their own economies are shit.

*If you're prepared to go to sea in a dinghy intended to carry fifty maximum, but carrying four times that number, without sufficient food and water for the journey, that'll say something about your IQ.

When these individuals arrive in Europe, they ain't going to be Doctors, Nurses or Teachers.

Yes. i realise what the piece is about. It was the let's blame the Jews bit in the comments I objected too.

Antonio Gramsci communist, plus the whole lot at Frankfurt school, tell me..... that wasn't a German Yiddisher conspiracy?

White Christian Europe is enemy No1. for some of 'em, not least Soros and his gang, it's a dark alliance because the Nazis [corporate Germany] still run the Fatherland and by extension MittelundOkzidentEUropa.
But the, n the Nazis cultivated their close Muslim Brotherhood links and how much shit has that caused and still is, who actually knows which side the Germans really stand on?
Next, recall just who it was, yes! the Krauts who caused the Oktober Revolution in Russia, purely out of and out to, stiff the Entente Cordiale in the EAST. Affirm it, even now they [the fatherland] pretend to play it tough with Putin and all the time are doing business and the chosen race member - Georg Soros loves Merkel, what a clusterfuck it all is.

We know it well that: and they all hate Britain with a special reserved venom.

Bill Quango: "It was the let's blame the Jews bit in the comments I objected too."

Since we having a whinefest, I object to being ostracised because I would like to look out for my own people.

I'm tired of being harangued because my people can manage to run a competent, pleasant society, that just happens to be head and shoulders above all but one other in the world.

I'm bored to continuously be told that we should permit a never ending - literately, 6 billion people on the planet, 60 million in the UK, - stream of foreigners, yet there seems to be no end to the number we are expected to accommodate.

Meanwhile, we seem to be expected to accept a declining standard of living, because ..... slavery* or empire** or whatever.

*Britain, you will no doubt know abolished slavery and imposed the abolition on other nations. Of note it is worth recalling that Jews were hand in glove with the Moslems running the European 'white slave' trade.

**Britain left most of it's colonies in excellent economic shape, educated their native political class ( at our expense ) and the result is ... Zimbabwe.

Check out how many illegal aliens/refugees/free loaders/escaping terrorists/NHS tourists/etc., attempt to get into Israel............ there you go you've got your answer.

I've been mystified from the start by governments' (not just NGOs') active collaboration in landing huge numbers of the dregs of Africa on European shores. It's surreal, to say the least.
As for the weird posts here about Jews, until Internet forums like this (or The Spectator etc) arrived, I'd just assumed old-world anti-Semitism was dead. I doubt there are many of these oddball Jew-haters and Zionist-conspiracy theorists, but some of them are remarkably diligent and vociferous. Even stranger than helping millions of Afro-Asian parasites to blag their way into Europe...

I wish. Along with all the bleeding-heart "liberals" who obviously want to see their own civilisation overwhelmed by uneducated, unemployable and frequently violent 3rd worlders.

Bill Quango: "It was the let's blame the Jews bit in the comments I objected too."

So its anti-Semitic to object to something like the following:

Malcolm Stevas: " I doubt there are many of these oddball Jew-haters and Zionist-conspiracy theorists, but some of them are remarkably diligent and vociferous."

And a good number of them seem to be Jews, trying to perpetuate the Jewish Victim card.


Malcolm Stevas: "I doubt there are many of these oddball Jew-haters and Zionist-conspiracy theorists,"

So if I step on a rake that's been left lying in the grass and it springs up and hits me in the face, I don't hate the rake. But I do recognise it for what it is.