Any UK visitor returning from a first trip to the USA came back with food stories. These used to be about quantity - 'All you can eat for $1', regular steaks at 16oz and large at 32oz, piles of pancakes, syrup and bacon strips for breakfast and so on. We were simply astounded at the cheapness and largeness of portions. Then there is the novelty of a manufactured ersatz cheese in an aerosol, and a slight 'Ergh!' at Americans forced to eat GM Frankenstein food and chlorinated chicken. And there you have the British stereotype of American food. Fried chlorine chicken and GM white gravy in the South, hormone and antibiotic saturated factory beef in the North. And each meal triple the entire daily calorie count.

Friends came home from a US road trip last week, reprising a trip they made seventeen years ago. They were not happy. Everything - food, accommodation, car hire - was no longer cheap. Portions were no longer huge. The $1 breakfast had gone. Cars were smaller and more ... European. And while poor blacks still consumed vast quantities of fried chlorine chicken, the rest of the US had moved upscale. Above all, the real US was absolutely nothing like the box-set US they had expected from watching seventeen years of US serials and soaps. Everything in reality was somehow less American and more global.

Well, that's trade and globalism. I have no fears that a UK - US trade deal will impose on Britain the stereotype foods of two decades ago. For sure, if our own blacks want fried chicken at £1 for two pieces, imported chlorine chicken is the way to go, but unless it's also Halal it won't crowd out the supermarket shelves. And Waitrose won't stock it. That's consumer choice. 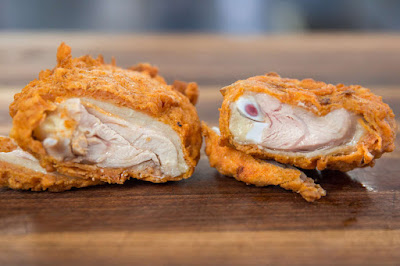 Every time I go there I am struck by how it is gradually losing its wonderful american-ness and becoming more like a sad old euro social democracy.

The EUs own food safety body actually advises that chicken should have a chlorine bath.

The vitriol against it is bizarre, tap water is chlorinated...

The last whole chicken I got had the instruction that the chicken should not be washed in water before cooking as the packaging protected the chicken in a nitrogen atmosphere.

That in the pic is revolting.

Tap water is chlorinated, has anyone died lately from drinking it?
Anyway, I'd prefer US chicken washed in chlorinated water to chicken from Thailand washed in sewer, sorry, river water.

I think the Remains can make an issue of it because of a confusion. Already condemned chicken has been "rescued" (if that's the word) by removing surface contamination with a heavy chlorine wash. This is fraud, as well as dangerous. There have been court cases in the UK.

As I understand it, the USA uses a milder chlorine wash on fresh chicken to reduce the chances of infection from salmonella, etc, as a normal food safety process. It is not the same thing, nor for the same purpose.

Any good news about us leaving the EU will be contaminated by the Remain establishment. If even Heath's government in the early 1970s can cheat, you can be certain that modern Remains will twist everything they can at every opportunity. Be very very wary.

It's really simple. Are Americans suffering from consuming American products? Unless they are then their products should be allowed for sale here. Should they not be to someone's taste, then that someone simply chooses to buy something else.

The whole thing would be a nothingburger without the BBC/ITV/Sky chasing it. A massive US/UK trade deal is in the offing and before you know it stock footage is found showing chicken carcasses being processed in water 'contaminated' with chlorine. And what is the message?

Brexit will give you the shits.

I am not kidding. You're witnessing phase 2 of Project Fear - with a bit of Trump hating thrown in. Enjoy.

The relative cheapness of other first-world countries relates to the exchange rate as well as to other factors. I've been to Vienna when I could hardly afford a drink in a bar, and at other times I've been astonished at how pricey it all is. Then again, anywhere in the Eurozone seems pricey at the moment, because we are paying German economy exchange rates.

Put the £ back to $4 like it was at one time, and their prices will seem reasonable. On the other hand, property will seem like a giveaway!

Suggesting that the chicken in question is "washed in chlorine" is absolutely as wrong as asserting that cars give out carbon (and before anyone says "particulates", yeah, yeah, most amusing, different issue). American chicken (Google informs me) is washed in water containing 3 parts per million of sodium or calcium hypochlorite. Your local swimming pool must maintain chlorinating agent at 1 - 3ppm (also Google).

Essentially, the chicken is plunged in a swimming pool, then rinsed. Just like your kids. Let's get sensible, people - this is not a threat.

"the chicken should not be washed in water before cooking as the packaging protected the chicken in a nitrogen atmosphere."

Yeah, I've seen that sort of stuff too and it makes little sense to me. If the chicken is in nitrogen in the bag, it surely isn't when you wash it. I'd understood that the "don't wash chicken" thing was because liquids from the carcass and water splashing out of the carcass tend to splash onto nearby food preparation surfaces or the dishes in your drainer rack, depositing any bugs on them.

But you can still get a cracking lobster stew served by a window with an ocean view. :)

We must tread carefully - our American cousins have to put up with the same liberal NWO shit that we endure, cripes can anyone really say that our 'battery chickens' are so bleeding perfect and then if one looks at many chicken labels [and I did today] much of it comes from SE Asia, processed in Thai plants.

We need the United States on our side, what we don't need [im VERY ho] is an effin trade deal. I mean, come on we have traded with the Americas for hundreds of years without one. Businesses and markets trade why do the politicians, multculti loonies [is your chicken transgender or finger lickin from lesbos relevance not at all] posing as bureaucrats and lawyers have to fuck it up?

WE don't need Berlin telling us how high to jump - either.

Grits, the real cornerstone of the great American Breakfast!

I spend a couple of months a year in America and after 30 years I still find it exciting and very different than here, more expensive now yes but food quality very much improved.

Nitrogen smells funny
People wash the chicken (unnecessarily) to get rid of the smell.
The washing contaminates the area.

Nitrogen is odorless, so you must be smelling something else.

Some 40+ years ago had for a while a job collecting hens from farms and then processing them. The battery hens which were the majority were generally in poor condition, the deep litter and free range were better. By standards of the time our production facilities were reasonable but sometimes we delivered live hens to other, how shall I say, companies run by and for diverse customers and they were filthy. Never eaten any sort of fowl since then, even at Crimbo, I'd opt for a steak.

I was there for the first time in 7 years in February. The portions are smaller. The cars are more European. But the the pick up truck is still the best selling car in the US. And the cars are still bigger. For my rental they gave me a choice of 'Any SUV in this row'. I picked a Hyundai Tuscon. As it was the most similar in size to my own UK 4x4. But was Hyundai was the smallest in the row.

portions were definitely smaller except in the diners where they seemed about the same. But cost far more than years ago.

I would say 100% the people were thinner. I was appalled the first time I went to Florida and the mammoth people slugging about..Not this time. I would say they looked like us.

That means either they have improved their diet or we have adopted their eating habits.
I think the latter. The people at Florida Mall looked little different in size {except slightly taller} than the people in MerryHill shopping mall in Dudley.

"Anonymous Timbotoo said...
Nitrogen is odorless, so you must be smelling something else."

But still, theres an unusual smell to most "packaged in a protective atmosphere" foods.
It dissipates in around 30 seconds, with or without washing.
With washing, its spreads the chicken bacteria that chlorine would kill