Moral courage that shames the dictators of Brussels

The Summer of 1941 was a bleak and fearful one in Britain. We stood alone; the public mood in the USA was against any involvement in the war, our cities were nightly being destroyed by Nazi bombers, Hood had been sunk, Rommel was pushing us back to Egypt in North Africa, Nazi U-boats were sinking tens of thousands of tons of shipping. A beam of hope shattered the gloom in June when the mad Hitler invaded the Soviet Union - and Britain, itself short of every piece of war equipment, with nary a .303 round to spare, under threat of invasion, gamely dispatched convoys of war material to Stalin, beggaring our own forces to do so.

In August, at very considerable risk from U-boats, aircraft and the spiteful might of the Nazi behemoth, Churchill crossed the Atlantic to meet President Roosevelt to agree the foundation of a postwar world. It was a meeting of the most astounding confidence, with Britain at danger of falling to the Nazi jackboot and the US not even in the war. From it came the Atlantic Charter, a document of hope, freedom and justice, a candle to light the breath of aspiration amid the dark blanket of evil that fell across Europe and Asia.


The President of the United States of America and the Prime Minister, Mr. Churchill, representing His Majesty's Government in the United Kingdom, being met together, deem it right to make known certain common principles in the national policies of their respective countries on which they base their hopes for a better future for the world.

First, their countries seek no aggrandisement, territorial or other;

Second, they desire to see no territorial changes that do not accord with the freely expressed wishes of the peoples concerned;

Third, they respect the right of all peoples to choose the form of government under which they will live; and they wish to see sovereign rights and self government restored to those who have been forcibly deprived of them;

Fourth, they will endeavour, with due respect for their existing obligations, to further the enjoyment by all States, great or small, victor or vanquished, of access, on equal terms, to the trade and to the raw materials of the world which are needed for their economic prosperity;

Fifth, they desire to bring about the fullest collaboration between all nations in the economic field with the object of securing, for all, improved labour standards, economic advancement and social security;

Sixth, after the final destruction of the Nazi tyranny, they hope to see established a peace which will afford to all nations the means of dwelling in safety within their own boundaries, and which will afford assurance that all the men in all lands may live out their lives in freedom from fear and want;

Seventh, such a peace should enable all men to traverse the high seas and oceans without hindrance;

Eighth, they believe that all of the nations of the world, for realistic as well as spiritual reasons must come to the abandonment of the use of force. Since no future peace can be maintained if land, sea or air armaments continue to be employed by nations which threaten, or may threaten, aggression outside of their frontiers, they believe, pending the establishment of a wider and permanent system of general security, that the disarmament of such nations is essential. They will likewise aid and encourage all other practicable measure which will lighten for peace-loving peoples the crushing burden of armaments.

It was the document that built the foundation of the United Nations, back in the days of its purity and before its corruption by lesser nations and little crooks in league with global corporatists. The right of self-determination was proclaimed unequivocally by the UK - at a time when a third of the globe was still coloured pink. It committed us to the most ambitious postwar programme of independence that the world has ever seen, as people after people, nation after nation, were given leave to exercise self-determination. The Atlantic Charter is an enduring document of the most profound moral worth, a foundation stone of peace and civilisation for the twenty-first century.

Let us remember those principles of self-determination this week, at a time when the functionaries of the EU act even now to suppress the identity and freedoms of Europe's peoples under a new legal and economic jackboot. Let us also remember the moral courage, the almost unbelievable confidence in the power of Right and Justice, that was displayed by the leaders of the free world in 1941. 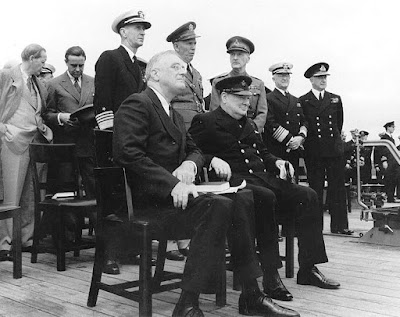 And the USA has been over throwing elected governments and installing compliant puppets ever since.

....and at around the same time in the cabinet rooms of Europe, our future enemies, the enemies of democracy were planning to create what became the EU.

So we know how we got here.... How the hell do we get our country back?

Thanks for reminding us of this, R

The Atlantic Charter was (and is) the world version of the Magna Carta.

May's 9th Oct HoC statement locks us back into the EU in the policy areas of diplomacy, defence, security and development, by treaty. So we will provide armed forces to carry out the EU's foreign and internal policies, including Catalonia presumably.

And until 2021, or beyond, we will be locked into the EU's existing rules and regulations anyway, for May's non-transition "transition".

There's a lot worse going on in the world than in Catalonia, so it is hypocrisy to get all teared up over it, and neglect the rest. What is crucial to us, and important for self determination in the EU (and elsewhere) is preventing May's capitulation to the EU.

. . . . and shortly after that photograph was taken the US and British ships' companies joined in a service of (Protestant) Christian worship.

Timely piece Raedwald. Each paragraph should discussed at length in every the fifth-form classroom.

'And the USA has been over throwing elected governments and installing compliant puppets ever since.'

(My Mum's cousin was on the Hood, he was twenty-one. RIP Freddie)

Written at a time when Germany was trying to take Europe by force; now it will take Europe, via the EU puppets, without firing a shot. Just look at the net contributions to the EU budget. He who pays the piper....

Churchill was indeed an antonishingly great man for all his faults.

They were men of stature. Now we have pygmies.