The geopolitics behind both Trump and Brexit

AEP concludes his most recent piece in the Telegraph (£)


Seen it this light, the US assault on the world’s existing trade system becomes less of a mystery. It is not a discussion about tariffs or Ricardian theories of comparative advantage. It is about geopolitics. This is much more threatening for Germany.

It also makes it all the more important that we work to keep Germany tied tightly into a Western European alliance (EU and NATO). Yes, it's all about geopolitics - not the stale Nazi lebensraum variety but the cerebral Kissinger realpolitik kind.

This is how the theory goes. The global core remains pivoted around Poland, and comprises the nations of Mitteleuropa from the Danish border to Croatia, the Baltic lands, Ukraine, Eastern Europe north of Bulgaria, and Western Russia. This core is both self sufficient in energy, grain and most raw materials and is wholly-land connected. Around the core is the 'rimland' - connected by land to the core. Beyond the 'rimland' are the 'islands' - Britain, the New World, Japan, Oceania, which depend on the seas and ships for trade and defence. There is a continual and tectonic struggle for power and dominance between the three regions. 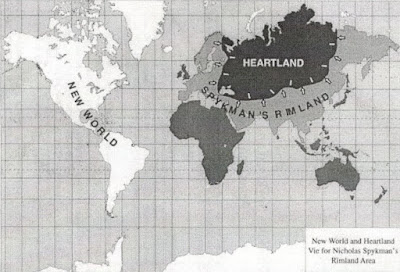 Following the fall of the Wall in 1989 both Henry Kissinger and Zbigniew Brzezinski wrote of the importance of maintaining focus on the core - it was not, as Fukuyama so naively claimed, the 'end of history' and Russia and Germany remained the focus of global policy and international strategy.


After Russia, the second geopolitical threat traditionally remained Germany and, as Mackinder had feared ninety years ago, its partnership with Russia. During the Cold War, Kissinger argues, both sides of the Atlantic recognised that, "unless America is organically involved in Europe, it would be obliged to involve itself later under circumstances far less favourable to both sides of the Atlantic. That is even more true today. Germany has become so strong that existing European institutions cannot by themselves strike a balance between Germany and its European partners. Nor can Europe, even with Germany, manage (Russia) by itself.  It is in no country's interest that Germany and Russia should fixate on each other as principal partner."

And it's not just one-way. America alone cannot contain the endogenous expansionism of the core; "Without America, Britain and France cannot cope with Germany and Russia" and "without Europe, America could turn … into an island off the shores of Eurasia."

The aims of this geopolitics are summed up in the classic aims of British diplomacy - "To keep the Americans in, the Germans down and the Russians out" and the fall of the wall hasn't changed a thing.

And there you have it. Trump knows he must both weaken Germany and keep her tied into the Rimland - this I think is that to which AEP alludes. And Brexit is no more than a re balancing that confirms Britain's geopolitical place amongst the nations of 'the islands' rather than tied to the rimland.

And it doesn't really matter whether you or I believe this analysis or not - it's clearly part of the understanding of the Davos and Bilderberg class. It's also a framework that allows one to place global players in support or otherwise of the three competing blocs. And explains a lot.
at 08:27

Email ThisBlogThis!Share to TwitterShare to FacebookShare to Pinterest
Labels: geopolitics

I'm more than ever convinced that Trump's doing the long-distance runner's version of setting a fast opening pace to burn out the weaker competition. He's an economics graduate and if he learned nothing else, he must have learned that tariffs are bad (economically); but, he also knows America is stronger and fitter than the rest of the field and can use tariffs to beat down weaker trading blocs - like the EU.

He's playing the EU and Kim Wrong-Un like fiddles. He's made the US the only nation in the world that matters at the moment (bar China, keeping strangely quiet). He's a businessman, not a politician, and moreover one who really doesn't care very much what others think of him. Boris redeemed himself a little in my eyes the other day when he addressed that private dinner and said (vis-a-vis Brexit) that we should think "What would Trump do?" - and then do that. Go in hard and be prepared to walk away.

We could start by declaring a National Bollocks to Barnier Day :-)

Either that or the traditional English salute flaunted by our archers and Agincourt.

I still think the classic British diplomatic stance holds true, an in much the same way that we can never let any continental power become too powerful.

Load of claptrap 19th Century thinking. It's who has the technological advantage rules, always was. He who holds the stick that scares all the others leads. Simple.

Raedwald, Yes, intriguing points. Though I rather think that the world will revolve around China in the future, not Poland.

One of the problems that the EU has, in order to keep "Europe" in the game against far better players like the USA and China, is to generate feelings of "EU-nationalism". That is very hard to do when actual nationalism (French, German, Italian, etc) must be quashed simultaneously. Though Remains, being more gullible, do fall for it.

Now, I much, much prefer the UK to be independent. But if our subjugation really is inescapable then it is only fair that we should have the choice of being part of the USA instead of the USE. However size may not be as important as most people think.

History tells us that geo-political winners are almost always the makers - the nations or empires with world-leading technology or skills - including organisational skills. Being a maker is usually more important that being big.

It does not seem to me that genuine free trade is possible internationally. Though the UK, particularly the English, are weak on nationalism, the rest of the world isn't. So, without a demos, it is not really possible to have (unbiased) free trade. Or, indeed, democracy. Almost by definition.

As a species we are defined by our fear of loss of food (really, sustenance: water, food, land to grow food on). All competitive politics, and trade, flow from that fear.

Anon @ 13:01. I was typing when you posted your point that the "technological advantage rules". Obviously I agree.

I don't believe Raedwald or AEP understand President Trump in the least, it seems to me he is a simple businessman attempting to balance the books, something politicians and economy wonks playing their silly geo-politics game are totally incapable of.
Germany has for many years run an enormous trade credit against the USA, President Trump will balance that deficit with or without German co-operation. Same for China, Canada, France and many others. If they get too uppity he has threatened tariffs, I do not think it is a good idea to call his bluff-as Canada is currently finding out.
China at least is militarily independent, look at the pitiful state of all other freeloading NATO countries who are still totally reliant on USA defense, then again look at the greatest threat to the EUrine countries, an islamic insurgency. You would think that for domestic peace a formidable military would be desirable. It is in their own best interest to re-arm urgently, instead they piss the money away on the islamic welfare insurgency. Hungary, Czechia, Poland and now Italy have woken up, yUK Germany, France, Spain are still dozing.
We live in interesting times, after centuries of failed diplomacy, failed geo-politics and failed monetary and economic policies perhaps a simpler method of government should be applied-paying your way, no borrowing to fund useless foreign adventures, balance the books, look after them that built your country through voluntary taxes not the latest hordes of gimmegrants, no foreign aid all of this could be called the Trump Doctrine but it is so close to common sense that I believe President Trump would disown that name.
Geo-politics be damned, the whole of Europe is reliant on Russian gas, you are just a weak, disarmed, dying continent, where free speech is not allowed, ripe for the insurgency. Wakey, wakey!!

How's that whole transgender rights legal marijuana surrender monkey thing going for you all there, Cascadian?

About as well as predicted Raedwald, on current trends we will have a 50 cent dollar v USD, softwood lumber @$220 MBF, crude oil @$25 BBL and a vastly larger islamic insurgency. We have learned nothing from EU mis-steps.

You should really consider writing an article about Canaduh it might be welcome relief to your beleaguered yUK readers. Stupidity is endemic in todays world, I have stated frequently that as whole the world has peaked and we are in decline all-over, I read today that is factual, IQ measurements are declining 7% per generation since 1970ish. I would suspect that 7% is sharply understated for Canadian and yUK politicians.

Other than that things are fine, as I hope you are too.