It's official - the EU is off the UK's Christmas card list

Much to his great displeasure, the Chancellor's department announced today a new commemorative Brexit coin. The news stuck so badly in Spreadsheet Phil's craw that he couldn't bring himself to announce it in his budget speech - but allowed his officials to sneak it out in the press releases.

The reason for his distaste is clear. Whilst we wish peace, friendship and so on to the 27 remaining nations of the EU, and indeed to every other nation on the globe, our good wishes are conspicuously absent for the EU itself - which is not a nation at all but a Federation, a bureaucracy, a snoopdom of prodnosing unelected officials.

Not only have we cold-shouldered the bullying, hubristic Federasts in Brussels but we're opening up our quick-entry passport readers to all our more mature anglophone cousins, plus the Japanese.

PTSD Adonis and 'Howler' Grayling and their dags will be having hysterical vapours on Twitter, I have no doubt. Just a shame the coin won't be out for Christmas - I can see a few million Christmas puds being loaded with the things for the extended family if they were. 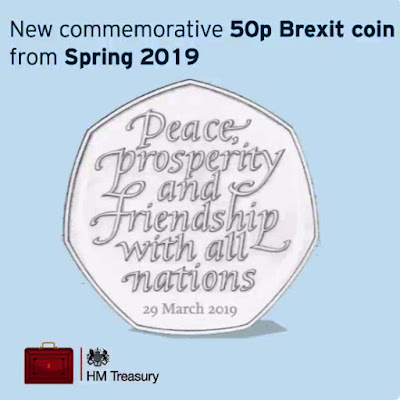 "About to enter, fellow-citizens, on the exercise of duties which comprehend everything dear and valuable to you, it is proper you should understand what I deem the essential principles of our Government, and consequently those which ought to shape its Administration. I will compress them within the narrowest compass they will bear, stating the general principle, but not all its limitations. Equal and exact justice to all men, of whatever state or persuasion, religious or political; peace, commerce, and honest friendship with all nations, entangling alliances with none; the support of the State governments in all their rights, as the most competent administrations for our domestic concerns and the surest bulwarks against antirepublican tendencies; the preservation of the General Government in its whole constitutional vigor, as the sheet anchor of our peace at home and safety abroad; a jealous care of the right of election by the people -- a mild and safe corrective of abuses which are lopped by the sword of revolution where peaceable remedies are unprovided; absolute acquiescence in the decisions of the majority, the vital principle of republics, from which is no appeal but to force, the vital principle and immediate parent of despotism; a well-disciplined militia, our best reliance in peace and for the first moments of war till regulars may relieve them; the supremacy of the civil over the military authority; economy in the public expense, that labor may be lightly burthened; the honest payment of our debts and sacred preservation of the public faith; encouragement of agriculture, and of commerce as its handmaid; the diffusion of information and arraignment of all abuses at the bar of the public reason; freedom of religion; freedom of the press, and freedom of person under the protection of the habeas corpus, and trial by juries impartially selected. These principles form the bright constellation which has gone before us and guided our steps through an age of revolution and reformation. The wisdom of our sages and blood of our heroes have been devoted to their attainment. They should be the creed of our political faith, the text of civic instruction, the touchstone by which to try the services of those we trust; and should we wander from them in moments of error or of alarm, let us hasten to retrace our steps and to regain the road which alone leads to peace, liberty, and safety."
My emphasis

The coin: to be a little cynical, just a device to lend support to the May/Hammond/Robbins fiction of actually leaving the Evil Union on 29-03-19...

Maybe a coin with an embedded speaker playing "Hotel California" on a permanent loop...

@ Span Ows .... forgive my ignorance, but where does that come from?

I'm afraid I consider the coin in the same way I consider the restoration of our blue passport: meaningless, if Treason May's Chequers betrayal or similar goes ahead and we remain shackled to the EU.


The coin should have shown a 'broken chain' with the words 'free trade' under...

Fuck off to that.

"all friendly nations and allies"

That would be about 10, not including the master race and Kermitland.

Anon, I'd include the Russian people in my 10. They know what Nationhood means better than many.

History is more interesting than you think:

Republican Party: Red From the Start

Ahhhh how quaintly muddleheaded and British. A 'commemorative' coin which makes no mention of the event it aspires to commemorate, and instead goes with a trite, wishy washy, bit of aspirational bollocks.
Suuuuure we *wish* we were friends with all nations....I *wish* I could get 6 numbers right in the lottery.

Britannia (yeah her with the trident) on her knees sucking off Mo the peaceful Profit whilst she is being buggered from behind by Ronald Mcdonald would be a far more fitting 'tails' side...

Wondered when Ketch would turn up.

Just as the '73 EEC 50p had a circle of hands touching (Seance much?) and the date but made no mention of what we were supposed to be commemorating...
....perhaps; 1973 the year of Hands That Do Dishes? At least the 1998 25 years EU coin was fairly explicit.

If the government really wanted to appease /mollify the more brexsshitey then they could have come up with something a little clearer...perhaps the exit date left blank to be filled in by hand as and when? Infact it might be wise to leave the denomination space blank as well, save on re-engraving to '1/4 of 1 Rabbit Pelt' Or perhaps the article 50 letter as a flying'scroll', oh sorry I meant of course 'flying loo roll'.

Oh dear, you have got it bad haven't you?

Thank you Span Owes and Raedwald. Inspirational ....that's what fighting for your independence requires, and sadly we haven't got.