Bridget Prentice, who used to be my MP, left the Commons when scandals about her expenses mis-spending began to emerge. I was about to present evidence of her using Parliamentary expenses to subsidise the running of a constituency Labour Party office when she threw in the towel. She ligged a job as an electoral commissioner which came to an end in September 2018 - putting her well within the frame of the 'Corrupt Commission' that acted so partially against Brexit bodies that it was condemned as 'not fit for purpose' by leading politicians. Anyway, back in 2008 I wrote to her over the mismanagement of the Met Police - a mismanagement that has got far worse since.


Here in the borough of Lewisham we pay the salaries of around a thousand Metropolitan police officers - our share of the 32,000 strong force. Yet where are they? Our homes can be burgled, fouled and violated, the possessions of a lifetime stolen and trashed, and we are told it's no longer a concern of the police - we're invited to leave our details on an answerphone. This year nearly thirty teenage boys have been knifed to death in London, yet on the buses and in Lewisham market at the end of the school day are scores of knife-carrying teens terrifying each other and causing public fear.


I do not believe that life in Lewisham is as grim, unappealing and crime ridden as you portray in your letter. If you feel that 'knife-carrying teens' are terrorising 'the buses' and 'Lewisham market' I suggest then that you raise the matter with the police.

The arrogance and contempt of her response was quite typical - Bridget was never a clever woman, and I doubt she had ridden on a bus or visited Lewisham Market since being elected. It is exactly her brand of purblind ignorance that has seen the numbers of dead children in London multiply in just ten years - the young corpses no longer confined to black-on-black violence but claiming victims who really did stand chances of becoming architects or doctors. Yet there is something surprising about this - take a look at the Met's stats 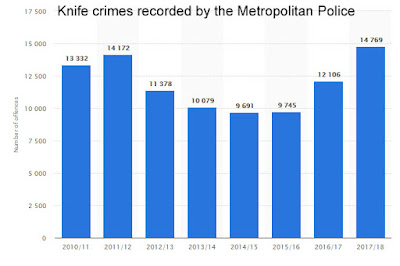 Boris served as Mayor from 2008 to 2016. His first term was dominated by the Olympics - but in his second term, he concentrated his efforts on knife crime, with some success. Then two things happened. From 2015, Theresa May, as Home Secretary, prevented police from carrying out stop and search - and in 2016 Sadiq Khan took post as Mayor of London.

London is now stuck with exactly the same brand of asinine, purblind social democrat stupidity that we had before 2008; there is little to choose between Bridget Prentice and Theresa May in terms of (in)ability, and Khan is as robust and effective as a feather in the wind. May is even now defending her appalling tenure as Home Secretary, and the vain, preening little Khan has only an eye for photo opportunities rather than dead teens.

For whatever reason, the number of fatal stabbings is increasing - counter intuitively, for if the volume of knife crime is what it was in 2008 with thirty dead, one would expect a learning curve in trauma medicine and response to have lowered lethality.

Perhaps now that normal middle-class grammar school kids are bleeding to death in the gutter, London's Labour mafia and their tame Prime Minister might take notice.
at 07:37

London's Labour Mafia and the governing class in general will only take real notice AND ACT when it is one of their own pampered, sheltered, "entitled" progeny who is knifed to death by a knife-wielding, drug-dealing, gang member.

Then - a la Jo Cox - they will be so outraged that action will be swift.

It is not a joy to listen to but hearing Lammy and Abbott blame foreign gangs is smirk-inducing. They are not wrong to some extent but when it was 'just' home-bred black gangs they dodn't say a thing.


As ever, reluctance to even acknowledge the root cause has a lot to play when it comes to effective action to prevent it happening.

We see this happening across the board - and all for the sake of political correctness.

I'm just wondering when my own minority status becomes important enough for me to be able to act with such disregard for life and public safety in general. It's past time we Christian, white, working/middle class people were offered an excuse to act irresponsibly.

Nothing will happen.A few dead kids (middle-class or gang members) won't stand in the way of the steamroller of diversity and political correctness.
I love watching politicians squirm when they finally wake up and smell the coffee. It would also be nice to hear from from some senior police officers telling the truth whilst they are in post, not just as they are about to retire or just retired.
Jaded

As long as those who have the authority to change things do not have the consequences made personal they can ignore the issue.

P.S. I am currently in Spain (again) and you see the local police attending school-out time standing by the zebra crossings etc - acting as high-end lollypop ladies - I guess they have enough man power and resources for this; I don't think this has ever been the case in the UK...maybe back in the 60s Dixon of Dock Green stylee but I can't recall?

Did you know that Sadiq Khan's dad used to drive a bus for London Transport?

I do not believe that life in Lewisham is as grim, unappealing and crime ridden as you portray in your letter

I lived in Lewisham (Forest Hill) in 2003. Liked the place but the violence and crime was already a problem then. I could see the signs and to my surprise back then, the violence wasn't, as i had supposed, largely from the 'skinhead' element.

If a major bleed occurs one can be dead before a medical pro gets see or do anything. (Generalisation alert.) Are these kids carrying longer or otherwise more dangerous blades than before making death a more common outcome?

So if the actual level of knife crime (number of offences logged) is similar to what it was in 2011 or thereabouts, why the hoohah? Not politics surely. Coppers moaning for more overtime money? Surely the finite resources of the Met should be targeting something important such as thoughtcrime on Twitter and the racist rantings of the Rudd creature.

You are right that the Electoral Commission is virtually a waste of time. It has almost no power, and paltry resources. The UK's elections must be among the worst-policed in the developed world, and there's a strong case for international supervision , as there is for bringing in outside police to investigate VIP child abuse. The EC had to be dragged kicking and screaming through the Court just to get it to act at all, don't forget. I don't know what's to be done about the CPS though.


@Mongoose - knives are a close-combat weapon with the attendant risk of self harm should your opponent have a similar device hence I suspect there is a 'technological war' going on to see who can get/use the longest (and therefore most effective) knife in a fight.

The recent images of a cyclist attacking a car using a 'Rambo knife' where the blade has to have been 12" or longer seems typical.

Given this IS a 'technological' progress we should fully expect to see hand guns as the standard carry by many of these same thugs on the basis of 'you don't bring a knife to a gunfight'.

It's only a matter of time.

And to think, Dave, that we used to go to Scouts with a bleeding great sheath knife strapped to our waists. My brother had somehow scored a WWII German job. It'd be a hate crime just to think about owning one now.

I remember back in the day discussing the lunatic yanks and their obsession with guns. From somewhere came the assertion that the murder rate had plummeted in England as the fashion for wearing swords faded. The violence and stupidity it seems are always with us but not always the means to turn a bit of a ruck into potentially lethal combat. In which case: Mongoose's 17th Law - if found brandishing a knife in the street, you shall go to prison for a number of years equal to the length of your knife blade in inches.

My Father in Law lives walking distance from Lewisham market.
A kid was stabbed in his street last year in the summer. Next door to him is a drugs den. There was a stabbing outside it last year also. Its been investigated. Nothing happened. The drug house owners claimed it was a domestic incident. Chinese on Chinese.
And there was an arrest with no charges. No drugs discovered.

FIL has made twenty or thirty complaints about his off their face neighbours who work all night making up their drug packages. Music at full volume.
Nothing is ever done.
Even with a stabbed person. Nothing done.

In fact, the only arrest and conviction, was of a dementia man who stabbed his dementia wife in the oap flats over the back.