Britain's future is over the oceans

When they tell us that we are now in a multi-polar world, I think what they really mean is bi-polar. Or as our resident pedant may instruct me in the comments, simply polar. Sure, there are a number of aspirants in a runner-up class - India, Brazil, Russia, the EU27 - but the N and S are unequivocally the US and China. And we must all pick a side. It will never, I hope and pray, come to a 'hot' war, but economically, culturally, morally we are in conflict. What has emerged quite clearly since the Referendum is the extent to which support for the EU depends on a visceral hatred for the US; you've read it on here, in the comments.

This EU27 hatred for the US is by no means universal - Poland and Italy are fans, Sweden, the Netherlands and Germany are not. However, it's what is driving their wriggling to escape NATO whilst continuing to enjoy US and UK military and intelligence protection for free. Nick Clegg's hollow claim that the EU has no interest in an army has been proved vacuous if not mendacious, as supranationalist ranting zealot Verhofstadt has been crowing with joy at its formation. And joining the extremists of the EU27 are our domestic extremists - Corbyn's followers. Their leader is not even a man himself who can be entrusted with intelligence secrets because of his close and enduring links to terrorist organisations.

The current State visit by the US President is a clear demonstration of where our preference should take us; away from the EU27, pro-China in its alignment and deeply compromised by Chinese penetration of every single one of their piddling accomplishments - including Galileo, which Beijing can shut down at will with the click of a mouse.

Our own future is not just across the Atlantic but over the oceans - as it has been since the 16th century. The past forty years was a blip, a wrong turn taken by political pygmies. The events of this week will do more than anything else to demonstrate that. 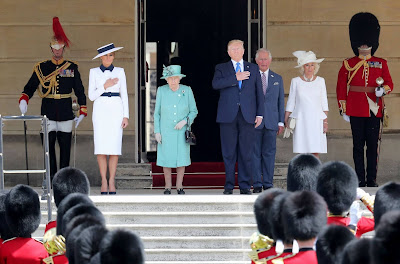 It is quite worrying how many in Europe see China as preferable to the USA. Macron’s viscous attempts to suppress the yellow jacket brigade and very heavy handed attempts to initimidate political comment make him a much nastier and dangerous man than Trump. France is much more of a corrupt and anti-democratic state than the USA and fits very well into the EU world view. Thank goodness for the channel, at least there is still clear blue water physically between us and the EU. I rely on the Brexit Party to put political blue water between us as well. Trade with the EU makes perfect sense, there are still lunatics who are prepared to pay for champagne, I prefer Cava but I do like a good German car or fridge. I will be honest, I like the USA but I would not want to have to drive their cars.....unless they are the only ones withou a black box in them and proper engines.

Quite right Radders, blood is thicker than water.


The USA have all their eggs in one basket - the MIC. Instead of relying on their technological and industrial might to reap the benefits of international trade and good relations, they have allowed the money-men to take over and necessarily utilise force to maintain their cash-flow.

The EU is another construct built under the same guise and is now having to rely on its own 'force' to maintain progress.

In the face of an Indo-Chinese- Russian effort to shift 'power' to trade (the Chinese belt initiative) the tough-talking mantra is upping the ante such that anyone threatening the US hegemony is having to 'arm-up' to counter the inevitable attack their progress will bring upon them.

The American people have been betrayed by their money-men (let's not get into who these are.... I can't be bothered with the inevitable accusations) and the Europeans are fast headed the same way. The only opposition has been Trump and Farage (so far) and the last to try to break this hold was Kennedy - we saw what happened to him.

People don't hate America(ns) - they hate what has taken over control of it (or, they should) just as we hate the Globalists that are steering Europe and the UK into dangerous waters.

This isn't politics. This is money and control. Those that control the first, own the second.

A (non-political) union with Canada, Australia and NZ and the closest possible relationship with the USA (and, in time, possibly India) is in our long-term interests. As is maintaining and strengthening the wider Commonwealth.

It is already obvious that the Establishment's policy of last 50 years, shackling us to the EU and subordinating our national interests to their perceived interests of the continent, was an appalling mistake.

The sooner we're out the better.

The US has the biggest current account deficit in the world we have the second biggest. The largest element of theirs is China. Ours is the EU.

A trade war with China? You can argue that this has been going on for decades with the US coming second so far.

Our massive current account deficit with the EU is essentially a facet of us being trapped within their customs union. Within that customs union, other nations are accumulating massive deficits courtesy of the euro prison.

These are the fundamental problems the EU - the wannabe imperial power - faces. The politics that so dominates the narrative is just a noisy sideshow.

What the Donald brings to the party is a fundamental hostility based on his correct perception of the economic and political relationship with said wannabe imperialists.

He may lose in 2020 but as with us, the genie ain't going back in the bottle. The next US president may perhaps make globalist pro EU noises (if its still there of course) but his heart likely won't be, likely can't be, fully in it.

The EU, economically, is an 18th century Mercantile block. Bonaparte's continental system didn't work 200 years ago. What makes them think Juncker's, or Verhofstad's (or whoever's) will work now?

Worse try than usual at mindless trolling, Edward. Nul points. And a delete.

Do try to be entertaining at the very least.

Couldn't find a direct link to the video, but it's contained within this article. Farage very briefly talks about his meeting with PDJT and the possibilities of trade with the U.S.

The Anglosphere is of our making and in our image, we should embrace it again!

No link posts please - I really want to read your opinions, your arguments, not someone else's