I can't wallow, I'm afraid, in the sort of political class hypocrisy that today will heap May with faint praise. Today she goes as Party leader, and good riddance to bad rubbish. There is, in all honesty, not one single positive thing she's achieved. Everything she touched turned to shit. A woman of no talent, no real ability, uninspired, mediocre and without charisma, it seems she got as far as she did on a mixture of raw cunning, ruthlessness and deluded self-love. She has been Britain's worst PM since Lord North. We are better off without her. Sadly she remains in Number Ten like a bad smell until we have replaced her.

Meanwhile the shock of Peterborough should be a reminder of what will happen to Britain if May's abject failure to Brexit is continued by her successor. If we're not out by 1st November - in time for the most glorious firework displays since the millennium - the Conservative Party is finished.

Don't waste a breath of sympathy on May. She's cost this nation scores of billions, created schism and disharmony, prolonged the uncertainty and has split families and workplaces. If she truly loved this nation she would have gone after her disastrous 2017 election. No, there is only one thing that May loves - herself.

Now she's gone, there are two more destructive narcissistic liggers we must bring into our sights - 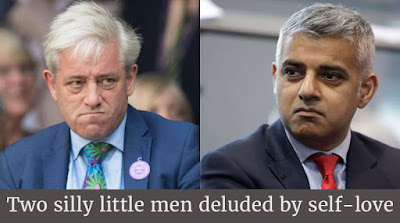 Rather worse than Lord North.

I agree with Jack.

Don't talk to to me about those two fascist dwarves, both antidemocratic from their heads, down to their very nearby toes.

When you say shock of Peterborough... No I can't believe that they like Corbyn supporting felons and want more of the same, with an added frisson of anti-semitism thrown in this time.

Can you add the House of Lords to these two little pricks please, Raders?

Good riddance to the whole squalid shower of them.

The tide is turning. The cracks are showing.

Farage crept out of a back door, minutes before last night's result was announced. How absolutely like him.

What tide is that.

May can still do serious damage while she remains in Number 10. Six weeks is a long time.

May could wreak havoc if she ran through wheatfields at this time of year.

It's a good job she is phsically well controlled...

Agree. I can't even feel sorry for her. Same shit show as Home Sec, complete disaster.

Peterborough: do you think it was tactical voting? How can they possibly vote in Labour again: in the 2017 GE Labour won by 2%...same yesterday.

RE: SO
Labour postal votes- appealing/manipulating the Muslim block vote.

Cheesy--By your own corrupt remainiac standards Labour lost ON ONLY 31%TBP/Tories got 50% of the vote so there must be a second vote. But you won't call for that will you hypocrite?

As for Farage--why should he stay to face a hostile crowd of remainiac so-called reporters? Let them whistle.

Also the end of Treason May has likely helped the Tories. If she had been unmoved then TBP would likely have edged it.

Thorwing Cheesy to the gutter as he deserves Radders is right about Treason May. She has been a remainiac traitor and EU agent from the start. She is a bungler also and was known at the HO for her combination of arrogance and rank bungling. Brexit sabotage on behalf of her EU masters was always her plan. She bungled it tho'.

It galls that she is pissing off to a nice cozy retirement. She needs to be tried for treason and publicly hanged.

But 6000 postal votes need to be looked at I think.

A mouthy anti-Semite got in quite possibly because that is a feature not an objection for Labour's new imported voters.

That was Bliar's plan all along.

All migrants regardless of origin or ethnicity should get no vote in anything for 100 years nor their offspring. At 100 their assimilation can be reviewed. They can work and have the better life they came here for but no voting in anything for 100 years. Retro-actively back-dated to 1/1/1997. Thus taking at least 5 million potential imported votes off ZaNu. Corbyn problem solved.

Being critical of Israel's military, defence, security, and foreign policy is no more anti-Semitic, than being critical of Argentina's under Galtieri would have been anti-Hispanic.

Less of this silly nonsense. If you want real prejudice, then look at the Tories, ukip and Brexit parties who have large, thriving anti-just-about-anyone-you-can-name strands woven throughout.

And why did Labour elect a leader from a Jewish background, Ed Miliband, if they were anti-Semitic? Changing one's religious outlook, as he did, does not affect one's race.

The Arabs are Semites too, along with the Maltese, Sudanese etc. incidentally.

Yes, re postal votes, yes, let's have a look at all the care homes, where the owners "help" their charges fill them in eh?

I regret deeply that so many stupid Tory voters didn't put up a show of solidarity to oust Labour. After all, what did it matter? The seat was held by Labour and Tories not winning it is no further loss. But, there was a gain to be made by kicking out Labour.

No wonder the Tories are doomed.

yes, thanks all; I see that now. 20% of the total poll were postal votes?!!! That is unheard of. I read that a convicted vote fraudster was helping, previously convicted of vote rigging in...Peterborough.

guido has pulled a whole post re the result, maybe due to phographs of the 'community' celebrating, no guesses which.

From Breibart UK.
Interim Prime Minister for Life? May Will Only Go If Successor Has ‘Confidence’ of MPs
Seems like you may be a bit premature Raedders

The media characterize Labour having an anti-semitic smell to it. But its the same media that referred to mass rapists of young English girls, as Asian. The fact is that virtually all were Pakistani Muslim.

The anti- Israel vote in the UK does not come from the anti-semitic section of society, but from the Muslim population.

And why did Labour elect a leader from a Jewish background, Ed Miliband, if they were anti-Semitic?

Not forgetting of course that Ed Milliband had his brother David as a fellow, and strong contender, for the Labour leadership race. The whole anti-semitic thing is a red herring and a cheap smearing tactic.

The media are reporting May wants to announce a multi, multi, billion pound legacy project in each of her remaining four weeks.

She is writing the opposite of Hitler’s Nero orders in her bunker.

She’s gong to destroy the country the Brown way. By covering it in gold.

I suspect that over 50% the Peterborough electorate will not be happy with the result, bearing in mind the May 2019 EU MEP election results.

Another example of why AV is more democratic than FPTP whilst still retaining the advantages of a specific constituency MP.

MOMENTUM.
There were no people’s liberation army invited into the party when Miliband was leader.

Korbyn loves them. Has been with them his whole political life. He may not hate Jews with their bile himself. But he is indifferent to what happens to them in his Labour Party. He’d much rather protect his own pure communist, though anti Semite buddies, like Pete Willsman than have to kick them out. So if a few Jews have to suffer, so what?

It’s so very hard to be certain that no counter revolutionaries are hiding among the doctor or managerial or officer classes. So best eliminate everyone, just to be on the safe side.

Jez can’t be sure which Jews support Israel and which don’t. But their numbers are so small that getting shot of all of them from Labour shouldn’t cause much hardship to the party.

It is germane to note the constituency that voted to return a Labour candidate, is NOT the same area (the local authority) as that which is enumerated for the purposes of EU elections and the referendum.

You don't need to be a brain surgeon to realize those additional white voters would have easily swung it for Brexit party if the same boundaries as for the ref were used.

In a more honest age, Brexit Party representatives would admit that this is the reason for their failure, alas they too seem hellbent on maintaining a politically correct line and to avoid stating the obvious...demographics is destiny.

Someone should have taught Treason May this simple rhyme when she was a girl: Oh what a tangled web we weave when first we practise to deceive.

The tangled web which she, Sedwell, Robbins and the other Remainers in Nos. 10 and 11 wove has destroyed any residual trust in our governmental institutions. She deserves the legacy she created: the worst Prime Minister in our history.

I doubt if the CONs very belated sacking of her is going to save many of them. We just have to hope that the Brexit Party can prevent a Corbyn Government.

John Brown, since only 48% of the Peterborough electorate could even be bothered to vote, then they'll just have to lump it, won't they?

Also, since the House rejected every possible version of EU exit, what do you think the chances of May's designated successor winning a confidence vote are?

No idea on what will happen as a result of our HoC MPs refusing to implement the EU referendum decision where the result was leave 64 : remain 36 by constituency and where they have by a large majority voted to trigger Article 50.

If the EU wish to only offer a treaty where we accept EU laws, budgets, taxes, fines and policies (trade, energy, environment, foreign etc) but without representation or veto and with no lawful means of exit – the one described by Mr. Verhofstadt’s assistants as reducing the UK to EU colony status – then the only way forward is to leave with “no deal” and negotiate the future relationship from outside the EU.