It's the Express this morning that carries the best story. You'll remember how we're always being told that the EU is a 'rules based organisation'? Indeed the EU has been as tedious as a pub bore on the subject, whilst privately breaking all its own rules when the interests of the, erm, EU are at stake. This is going to work against the EU's fishing nations in a big way, as Bertie Armstrong, Scottish Fishing Federation boss, told the paper.

As the Express reports -


Bertie Armstrong, the CEO of the Scottish Fisherman’s Federation, claimed the European Union would become the "laughing stock of the world" if they did not respect British waters in the event of a no deal Brexit. "The European Union has led the world in the fight against what is referred to as IUU - illegal, unregulated, unreported fishing, off the coast of Africa and elsewhere in the world. If fishing nations in northern Europe were suddenly to engage in fishing which is not approved by the new owners of the waters, then the European Union would be the laughing stock of the world. It would be unacceptable."

This doesn't mean of course that individual French vessels will not seek to break the law - either straying a mile or so inside the marine boundary in acts of calculated defiance, or more seriously by turning off their AIS transmitters. All vessels over a certain size must continuously transmit vessel information under international law - this is the AIS plot of Peterhead harbour this morning, crammed with trawlers. Individual ship details can be brought up to give detailed vessel, course, speed and track information. 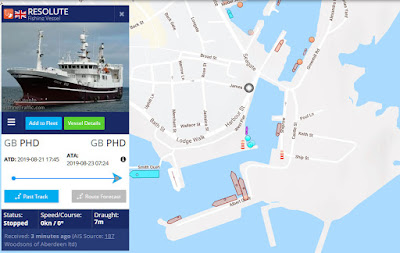 So how can we track them if they switch their AIS off? Well, we've just bought 26 new Protector drones, licenced to fly in European airspace and piloted from RAF Waddington. These powerful albatrosses can glide over our fishing grounds, fitted with radar and sensors that can detect and match physical signatures with AIS transmissions, and any vessels with AIS turned off can be closely filmed and photographed and their position legally recorded. As the Express points out, this is exactly the sort of technology that the EU has been championing for African fishing grounds.

Even if EU27 nations make difficulties after illegal fishing has been established in handing over skippers for trial or vessels for seizure, the trawlers will remain liable for immediate seizure by the Navy if ever they enter British waters again - meaning illegal fishing will be for many a one-time risk.

Except .... on the basis of his performance with Merkel/Macron .... I predict that Boris will negotiate away right of access to our fishing waters.


As DeeDee says, access to our fishing waters is huuuuge for the EU and I don't expect them to give this up easily or any time soon despite our determination to reclaim them.

Given their high profile position, these fishing grounds make for particularly powerful negotiation positions such as 'we'll drop the Backstop if we can keep the fishing rights'..... and I suspect DeeDee is perfectly correct in her reasoning.

Never let a politician give you hope - they are pre-programmed to disappoint.

The French fishermen, to whom the UK Government sold quotas to fish in its waters, would have a right to sue for Breach Of Contract if they were prevented from doing so, wouldn't they, Raedwald?

I understand from you that you are something of a contract law buff?

Incidentally, the right-wing press seem to be in more of a froth about these dinghies carrying unlawful immigrants than fishing just now, but have people asked why they would rather be here, than amongst their more numerous Brothers in France anyway?

And voting Leave only seems to have increased their numbers, doesn't it?

JPM - there is no contract whatsoever between the British government and any fishermen of whatver nationality - even British ones. The privilege they have been granted of taking fish from British waters is dependent utterly on the UK's being a member of the EU.

Presently, because the UK are members of the EU, all waters beyond the low water mark are EU waters, fished by EU vessels. On leaving the EU, no longer a member, the waters out to 200 nautical miles or the median line, revert back to being UK waters, along with the living marine resource.
The French are fully aware of this, but will try anything, including ignoring their own rules.

Do you think that there might be the basis of a dispute, à la Operation Stack, but a tad bigger, then?

Are these drones fitted with Hellfire missiles? That would give Johnny furriner something to think about.


JPM should be aware that, as ever, the generosity of the benefits system is the main attraction for 'refugees' - that and our propensity to overlook their illegal presence, the availability of an 'underworld' they can exploit and precious few convictions for any offence (allegedly).

Their desperation is exacerbated by the prospect - however small - that we might police our borders somewhat more restrictively if/when we leave the confines of the EU.

Or perhaps we should have an EU-like open borders attitude and welcome anyone, from anywhere, without education or skills and more likely to be carrying infectious disease and/or have a built-in animosity towards our culture?

Let's see how well that works out shall we?

Personally I am prepared to give Boris the benefit of the doubt for the time being. If he screws all this up, both he and his party are buggered once and for all.

Let's wait and see what happens...

I hope Amber Rudd is reading this.

With two great fishing fleets (much depleted by bunbling governments over the last several years) at Rye and Hastings, I suppose she changed her mind yet again when her remainer position was untenable, as she needed the money.

I reckon her constituency voters will give her the heave-ho come the next election, but as the only contender will be a Limp-Dump, it'll seal the death of Sussex fishermen forever.

Dave, illegal immigrants are not entitled to benefits.

They likely would not need them anyway, and they remain clandestine.

However, maybe this is why they prefer the UK:

Oh so THAT'S why muslims are so wondrously and peacefully integrated in France. Thanks for putting us right.

I made no such claim, did I Mark? All I tried to do was to invite people to consider why some of them would rather be here than remain in France.

Another simple reason would be that Bangladeshis, Pakistanis, and Somalis etc. would rather join their established communities of fellows here, whereas Algerians, Tunisians, and other Francophone Africans would rather become part of theirs in France.

The thread was about fishing but you raised illegal immigrants, the "right wing press" etc. You were slagging this country off as you usually do.