I don't normally 'do' Twitter these days (though I keep it ticking over ready for the election campaign) but yesterday produced a couple of corkers. Dear Piers Morgan wrote "What this Brexit situation definitely needs though is more woefully ill-informed Remain-voting celebrities screaming ever more hysterically about stuff they don’t understand because they didn’t get what they wanted in the Referendum.". I don't think I can improve on that.

Oh, and the anti-democrats are back to their dirty tricks again - 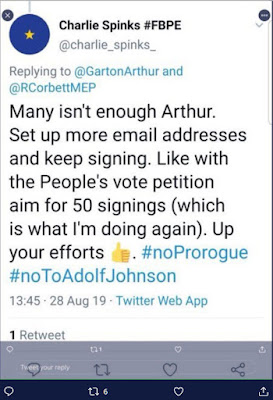 Yep, keep up the fake signings, Lads - it won't make a scrap of difference, and will keep your hands busy for the day.

Incidentally, I suspect all those whining now about the current session being ended after more than two years are the same voices who whined back in 2012 about the length of Cameron's first session. Yes, dears, Parliament is generally suspended every year. 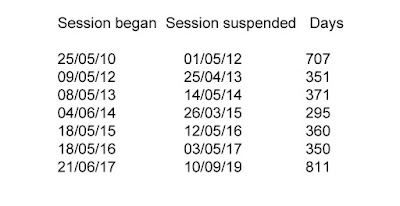 
One can imagine (with some real cringeworthy shuddering - no pun intended) the vote riggers using their right hand to type with and their left hand working furiously under the desk on 'other tasks'.

Don't be ridiculous! No it doesn't! If it did only one person per household would be able to sign a petition. Also it could easily circumvented by those with the inclination to do so by using VPNs.

If you have multiple email addresses you can vote multiple times and have each verified. IP whatever makes no difference. Lying remainiac drivel.

We don’t comment in detail about the security measures, but all petitions are subject to checks as part of due diligence and any concerns investigated."

"we don't tell people when their fraudulent activity had been unsuccessful"

Difficult to tell a bot I suppose.

" For security reasons, we don’t tell people when their fraudulent activity has been unsuccessful."

Maybe not but they always send a confirmation email. I would suggest that it contain an hidden extra. If the vote was fraudulent do not the authorities have a duty to check up on what else the fraudsters have been getting up to.


People that WON the vote have no inclination to have to vote again or protest by online polls so why would their numbers be 'large'?

Clearly the LOSERS (like Anon) have a real bee in their bonnet and feel compelled to do whatever they can - including sanctioning 'fake' online polls - to thwart the democratic process.

There is no other justifiable reason for their efforts.

They are scum. Pure and simple. Scum.

It's the point of this article by the writer

The point of the article was the dubious nature of these online polls and the previous form of remainiacs.

You were clearly trying to suggest that the greater number of likes on this particular form of social media somehow negates the actual referendum.

Do these stupid fuckwits ever learn? There have been at least two other tosspot petitions ove r4 million (or something) one of which wasn't long ago, that fuckwit tosser shit-for-brains cheeryJPManon was on here raving about...Jacob Mogg signed it 7000 times and Idi Amin 600 times he may recall. I have no doubt that this time it will be no different.

So those thronging the public places all over the country last night were bots too?

While the Troll is euphoric the pointless poll got a lot of students to get an extra email account, Dominic Cummings is preparing another torpedo for Monday.

Buy yourselves some ear defenders. The Remoaner hysterics will be unbearable.

Music to my ears!

thronging....hmmm, add ALL the thronging that went on all over the country and you'd still not fill Wembley.

Mr Frost is in Brussels to work on re-branding the backstop. Paint it blue, like those new passports.

I'm sure quite a few of them have an interest in bots.

No it won't make any difference to the outcome: which Boris intends to be a choice for MPs between a rock and a hard place:

Ruth Davidson could have stuck the knife in yesterday; she didn't. Instead she told us clearly what Boris is planning and urged Labour MPs to vote for the Surrender Treaty and longer term get a form of Associate Membership.

The CONs are going to do what the CONs have done for the past 40+ years: lie and betray the British people over the EU.