Blair struggles to rise from the political grave

The most loathed ex-politician in Britain is scrabbling to rise from his political grave; Blair, whose mummified features can barely raise a plastic smile these days, is sufficiently mentally deluded to think he can lead a successful minority coup against Brexit. With even his most crooked and morally corrupt ex-supporters having deserted him, he is bereft of any effective support and driven only by a zombie-like primal urge to cause trouble.

He has so far escaped prison for his mendacious Iraq adventures, though the possibility of crowdfunded private legal action against him is growing, and he may yet find himself in the dock in 2017. His Brexit performances may be an attempt to distract from having to face justice.

Blair has also announced plans to set up his own Disinformation Service to drip his own venomous version of reality onto social and mainstream media. Apart from the editorial staff at the Guardian, few will be gulled (or gulled again) by Blairthink.

There has also been no confirmation to date that Blair's efforts at resurrection are inspired by secret cash from George Soros, whose own seditious attempts to subvert democracy both in the UK and in America are bringing him perilously close to arrest. 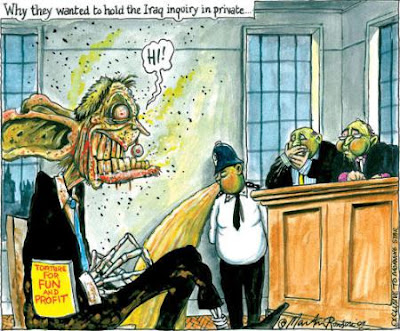 Made a small contribution to the Crowdfund so that the parents of soldiers killed in Iraq can, hopefully, get Blair before a Court to account for his malfeasance in public office.

As far as the country's concerned the sooner he meets the God he claims to believe in, the better.

How can a man meet God when he believes he is God?


I see a husk, a shell of a man, corrupt beyond salvage. Aye, long ago he sold his mortal soul, a Faustian pact no doubt of it yet how much of it is the true face of malice in that household - perhaps we'll never know, certainly she will take her secrets to the grave and an early one too, many wish it.

So, it's back to the analogy of Hitler-bliar in his bunker playing on his war table pushing imaginery armies and airplanes across a map which diminishes daily, squeezed from the west but mostly from the EAST - a knock on the door, a young lieutenant child soldier of JP Morgan...... shouts "we need you our dear leader to march at the head of our new panzer division" made up of has beens, the infirm, the mentally challenged and kids - oh yes lots of cannon fodder.
bliar smiles, "at last a call from my country and I must, I will lead them!"

The door to the bunker is opened, he steps out and much to his utter astonishment the thousands, the millions! weeping, scweaming, adoring crowds

Cut to, the padded cell.

As a veteran it was a no brainer to make a contribution to Roger Bacon and Reg Keys' quest to bring that ba$tard to trial and hopefully imprisonment.

His latest stunt in trying to reverse Brexit is doomed to fail. He doesn't realise that his support for another referendum guarantees that the Leave side would win be an even bigger margin. His clear disdain for the will of the British People is disgustin. He doesn't respect the result and insists that we vote again - presumably, until we get it right. So like his beloved EU.

If there is a Hell - I fervently hope that is where he ends up.

I have always taught my children/grandchildren that hatred is bad for the soul. But in the case of T. B-Lair I make an exception.

For what that thing did to our coutry I can never, ever find a soupçon of forgiveness anywhere in my heart. I would quite happily do my time at HM's pleasure for strangling the life out of the odious turd. A garrote would be my preferred method. Then I wouldn't have to look at that smug offspring-of-unmarried-parents visage.

After getting caught venerating the bones of St Theresa in London by Matthew Paris I wonder at TB's lack of overt demonstration of his Catholic faith. His attempts to load his administration with co-religionists, his weekly counselling by Cormack Murphy O'Connor and sneaking in through the Westminster Cathedral back entrance for Communion should inform on this gut's motivation.

Duplicitous weasels have their place in politics. After years of apparent influence peddling TB strikes me as little more than a "Labour" version of the Rick Mayall (RIP) Alan Beresford Bastard character.

Curious to see the BBC assisting with the political defibrillator paddles.


The (fully justified) opprobrium heaped upon Bliar doesn't detract from the strings that emanate from his partially-rotten carcass and lead to 'where ever' and the globalist/establishment puppet masters that control him - for Bliar doesn't have the brain cells required to act in the way he has, or intends to, without the appropriate leverage.

I just wonder if his slice of pizza pie was as big as everyone else's ... or as tasty?

I too have contributed to the crowd justice fund; they are very close now to attaining their financial goal and getting the lawyers to work. God speed to them. This action would be the single biggest factor - bigger than Brexit or Trump - that would make EU and UK leaders sit up and think "shit, we've lost"!

Perhaps it's not that curious that the BBC is helping TB

You scratch my back

The cartoon is too kind to the ghastly zombie

Hearing the news this morning, I could not get out of my mind the slightly revised words of this song (1966 by Jagger/Richards with famous cover by Chris Farlowe): 'Blairy, Blairy, Blairy, you're out of time.'

Not everyone has such a hatred of Blair or his attempt at overturning Brexit. A reversal may be unlikely, not least because it would throw every election into doubt, but there is a group of LibDem/Labour/Tories to which Blair's (and Farron's) message seems oddly compelling.

The loss of control inherent in the long winded Article 50 process leaves us vulnerable to Farron's histrionics, Blair's resurrection, Remain legal actions, and EU vindictiveness (eg: charging us a fee to leave). Whilst none of this was obvious in the detail, the general direction was plain: Art50 is a trap.

We should have walked away from the EU, just like the Americans did to the British Empire but legally (ie with diplomatic 12 months notice) and without the war. That way negotiations for a future trade (or any other) deal would have been on an equal bi-lateral footing. And the odious Blair would not have got a look in.

When the world learned that Iraqi 'weapons of mass destruction' was a fiction dreamt up by neo-cons the outcome should have been trials on both sides of the Atlantic, with dozens incarcerated for the remainder of the lives. The fact that those reponsible are today enjoying a free existence - in Blair's case a stupendous increase in personal wealth - is instructive to say the least.

With honour gone what are you left with? I'll tell you. You have former Republican President George W Bush supporting Democrat Hillary Clinton. Why? She's cut from the same cloth: a Deep State fabric with properties of invisiblity. There's an evil in this world that may wear the clothes of respectibility but underneath is a darkness so powerful that it can snuff out any light.

The attacks on Trump by the combined forces of the Western media is proof plenty that such power exists.

Steve, exactly and there is no doubt instructive how the Rothschilds mande their money, bunch of cunts but not much different to Goldman Sachs and their man Clinton who almost single handed fucked the world's financial system when he rescinded the Glass/Steagal act during 1996 and Clinton has accrued wealth unimaginable for an ex US president who led a very charmed life insofar as his dealings with the law were concerned.

He just won't flush, will he?

I wonder if his real motive is not to change Brexit but simply to get brownie points with the EU so he has a better chance of becoming its President?

17 February 2017 at 07:33
"As far as the country's concerned the sooner he meets the God he claims to believe in, the better."
Disagree, and I know one should not wish such things but for B lier I'm making an exception.
I hope his journey to the other side is slow, incurable and unbelievably painful.

"As far as the country's concerned the sooner he meets the God he claims to believe in, the better."
Disagree, and I know one should not wish such things but for B lier I'm making an exception.
I hope his journey to the other side is slow, incurable and unbelievably painful. // quote.


I'd be a liar if I said that, I did not have great sympathy whith those written thoughts.
Furthermore, I can only say I am rather surprised that, bliar didn't mention the death of a certain Yorks MP purportedly offed by a Fascistic/right winger/UKIP supporter...............illusion, smear, faux association, misdirection even though it is totally specious is after all bliar's stock in trade. That man is an ocean going liar and holds the patent on the model: a motherfucking arsehole.

Anonymous said 18 February 2017 at 00:12
Yes I'm surprised he didn't manage to weave that one in, whilst wiping a tear from his eye, or maybe playing the trembling lip ploy, perhaps he's saving that till later when the audience has got bigger.
Oh and thanks for the correct spelling BTW ;-)

As a keen Brexiteer, I welcome the wee s**t's intervention. It almost guarantees and even quicker and harder exit from the European farce.

Quite amazing that Bliar

a) Thinks he is part of any solution

but don't forget that Branson's messy fingerprints are all over this as well..