Worthless distinctions
The honours system has been irredeemably befouled and corrupted by undeserved honours given to politicians and civil servants. The public seem to support the recognition of sportspersons, artists of all kinds, the talented, the selfless, the gifted and armed services personnel - but their proper achievements are being beshitten by risibly unwarranted 'honours' to loathed and unworthy political failures and civil service time-servers. Why the hell should the goon in charge of procurement at the MoD, the idiot that's wasted billions of our tax money on the poorly managed buying of stuff that doesn't work, get anything other than a clock from his chums and a curt 'goodbye'? Why should hysterical little fools such as Andrew Adonis, with no real world experience and no achievement whatseover, enjoy the same status as distinguished scholars and academics of international repute?

Of course we should recognise the few worthy political recipients such as Patrick Cormack (he of "Country, constituency, party. In that order") but perhaps there should be a new honour created - say an order with a membership limited to fifty, with no seat in the Lords, and only ex-elected politicians eligible. But we must cull all the politicians and the civil servants from the British Empire orders, the Bath and Michael and George. Or they will be lost to those who really deserve them.

With each year, twice a year, the public clamour against political honours grows. Let's hope the establishment hears those voices.

Democracy at risk
With Labour still blocking any reform of our deeply corrupt constituency boundaries, the UK remains shamed by an Electoral Quotient (EQ) below third world standards. We're not even close to the +/-5% of the second world, let alone the +/-3% of advanced democracies such as New Zealand.

We're not well served by the current Electoral Commissioners, fat and complacent placemen unmoved by indignation at Electoral inequality and mired in a stasis that prohibits action. A clear-out of the Commission in 2018 is well overdue.

The young are also far less defensive of our democratic absolutes - such as universal suffrage and the secret ballot- than those of older age cohorts, and a Remainian elite still smarting from the Brexit result are pushing all sorts of alternatives to the majority vote to seek to re-establish their political dominance. I was joking in June 2016 when I parodied little Owen Jones as complaining "The wrong people are using democracy" - but this is now a joke becoming true. Many of them actually believe it.

The Electoral Commission also needs to get its collective head around non-member issue-based campaigners such as this blog and Twitter account, with no discernible spend. Online it's not about parties and financial structures but millions of ordinary people manning their keyboards. The utterly trivial impact of Russian postings during the referendum campaign was due to the utterly massive scale of engagement of the rest of us. I'm not sure that many of the existing Commissioners have ever actually used a computer, let alone know what facebook is. 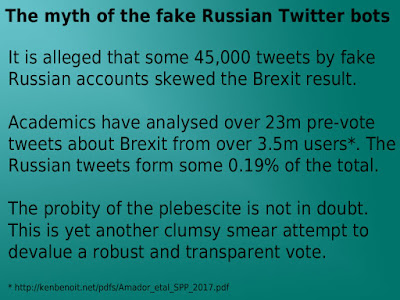 Email ThisBlogThis!Share to TwitterShare to FacebookShare to Pinterest
Labels: 2017

"With each year, twice a year, the public clamour against political honours grows. Let's hope the establishment hears those voices."

Just to rub our noses in it that it doesn't, Cleggy is made a knight.

Nothing will be done about the "Honours" system. It isn't there for our benefit. It just gets further degraded as every year passes and more rewards for failure (and in the case of Clegg, treachery) are doled out.

To be fair to the Electoral Commission, it has at least come up with a proposal to equalise Constituencies within the +/-5% tolerance. But Parliament has to vote for it and the turkeys won't vote for Christmas. Like the expenses system, this is an issue where Parties/MPs cannot be trusted to suspend self-interest; what the Electoral Commission proposes should be automatically implemented.

And finally, those who complain about Russian bots influencing our democratic processes seem to have no problem with Juncker's army of online Trolls or President Obama standing in No.10 and warning us to "vote to Remain in the EU or else."

Happy New Year to Raedwald and everyone else who comments on this blog.

My Dad worked for a big international company, as their Chief Engineer.

The company liked to have their senior people involved in local and county council chambers and the law courts - all unpaid of course, and he used much of his own time on these duties. It was good for their PR and good for his soul.

One day, he had a letter from The Lord Chancellor, telling him that he was to be made a Deputy Lieutenant of his County. His first words I'll never forget 'This is much better than a gong'!

It took me a few moments to realise that he felt that way because - again - the position was unpaid, and he could continue to make a difference, long after he retired too.

It was his sense of duty, and the magic letters DL meant more to him than any brass lump on the pompous fat chest of an idiot ex-politician on the scrounge.


The tainting of the Honours system has particular distaste for me as my F-in-Law deservedly got his MBE for voluntarily saving lives of those in distress on mountains whereas hearing of Clegg getting the highest of honours for being a liar, traitor and generally obnoxious little runt makes me want to puke.
Obviously the 'higher' the award the less it is held in regard - certainly going by example - and, as a generosity to those involved in their distribution, perhaps this is what they intend to display?

I just hope that bloggers like Radders are left alone in 2018 to continue their valuable contribution to the sphere - it's the only effective opposition to the fake and generally cr@p service the media hand us.

All the best for the coming year Radders.

'Why the hell should the goon in charge of procurement at the MoD, the idiot that's wasted billions of our tax money on the poorly managed buying of stuff that doesn't work, get anything other than a clock from his chums and a curt 'goodbye'?'

Why indeed. You should see what we've got stored away in various depots around the country. I went to one once, to pick up a brand new Series 3 Land Rover, and was given a little tour while I was there. Stuff that will never be used because it's not fit for purpose and technology that's been superseded on the day of delivery (Jaguar radios?). They never ask if it works.

My Dad worked for 34 years as a crane driver for Redlands and he got a gold watch made by Garrard & Company. It's mine now.

Happy New Year to your Readers - albeit in what I've long dubbed 'the Fifth World, where "Lilies that fester smell far worse than weeds."*

Remarkable two post Radders, gives me much food for thought and not that I disagree with much of it either.

Happy new year to you old bean, may the fates be kind to you but always beware of the Ides.

As far as a New Order - The Order Of the Brown Nose?
A shoe-in for quisling Clegg.
If the traitor gets elevated ( unless by a hempen rope)?
then Lord Clegg of Arslikhan.
Apologies for pinching from Private Eye.

A Happy New Year to Raedwald, with many thanks for this enlightening blog and also to Steve (because I enjoy all he has to say!) Lots of love to all! Maz

Once again we are reminded of the resume of failure that attaches to appeaser theresa, her end-of-years honours are a shambles dedicated to the wimminz and the unworthy. Look no further than the "royals" and their ridiculous displays of medals for their achievements in parasitism. Nothing will be done about these egregious "honours" that is the way of yUK.

One can expect that appeaser theresa will continue lobbying for further regulation of free speech on the internet, the proles are actually being effective in shaping the country, despite massive lobbying by the "powers that be", eg Brexit. Tony Blair has recently been honest enough to bemoan the fact that the proles are not voting for the leftist disastrous policies that only benefit his gilded constituency of bureacrats, university employees, and policy-makers.

Overall we must expect another bleak year of non-achievment given the meagre choice of "leadership", the financially prudent will continue to be robbed by low interest rates and understated inflation, those lost revenues used to fund low interest bonds to the government will be continue to be wasted in a million ways that only government can devise eg Grenfell residents housing allowances.

Despite the gloomy outlook I wish all here a happy new year, free as far as possible from government influence. And bless the brave souls in Iran for holding their government to account. Lastly I hope the sensible policies enacted in Hungary, Poland, Catalonia and Czechnia (sp?) may become a source of further irritation to, and contribute to the eventual downfall of the Euro and EU

You are right about New Years Honours. Nothing says "f**k you plebs" quite like giving Clegg a Knighthood...